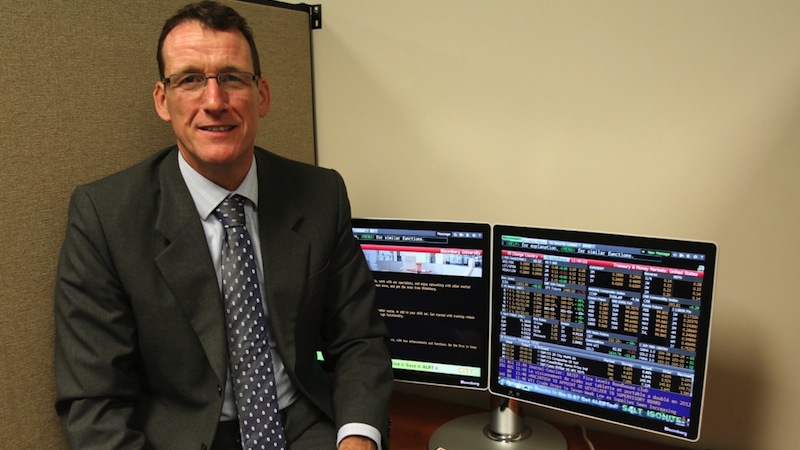 The installation of 11 Bloomberg terminals were thanks to the 2013 donation from alumnus Roelof Makken (BAdmin ‘85, BA ‘85), founder of Tern Analytics.

For most Brock students, the computers in the second floor lab of Taro Hall look unusable.

After all, with their multi-coloured keyboards and dual screens with scrolling market data, these computers don’t resemble your average desktop.

But for finance students like Tim Adams (BBA ’14), past president of Brock Finance and Investment Group, these computers, known as Bloomberg terminals, represent a powerful tool to access finance data and the key to his career success.

The Bloomberg terminals allow students to tap into real world markets in real time. For Adams, access to the terminals meant gaining a competitive edge in his post-university job search.

He’s heading to a new position in Alberta, where he’ll show partners at a Calgary-based investment firm some “tricks and tools” of the Bloomberg terminals.

“The partners liked the fact that I had the experience with the Bloomberg terminals,” says Adams, who used the terminals for both his classes and personal use. “I found them very intuitive and just took [learning them] step-by-step. I’ve impressed my professors with some of my charts.”

While most Ontario business schools have at least one Bloomberg terminal, it’s unusual to have as many as 11 available to students. The installation of the terminals were thanks to the 2013 donation from alumnus Roelof Makken (BAdmin ’85, BA ’85), founder of Tern Analytics, which provides financial and risk management and advisory services to Fortune 500 enterprises.

For Makken, stories of career success like Adams’s make him extremely happy.

“The terminals are a phenomenal interactive tool,” Makken says. “I’m pleased that Tim’s expertise made him stand out from the crowd. His experience was exactly what I was hoping for. It’s important to expose students to these tool kits.”

Since the terminals were installed, usage has been high — more than 620 students and faculty have used the labs as a resource to support their course work and even their personal investment trading. In total, that adds up to a total usage of 11,311 hours — or the equivalent of 471 days of usage.

“Bloomberg is a powerful tool, but it isn’t easy to use,” he says of his rationale behind including certification as part of his course curriculum. “We want to encourage students to use the terminals and not just as part of their courses. We want students to put it on their resumes.”