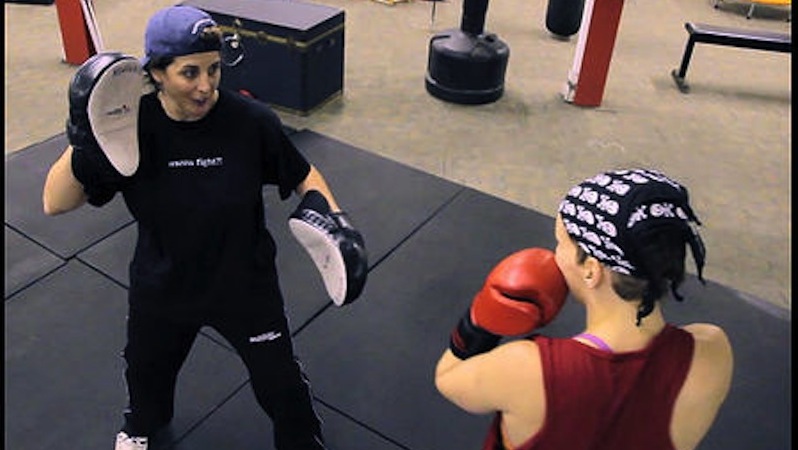 A scene from the documentary Outside the Ring, which focuses on Prof. Cathy van Ingen's research project on boxing to heal victims of violence

A scene from the documentary Outside the Ring, which focuses on Prof. Cathy van Ingen's research project on boxing to heal victims of violence

A documentary that features a Brock professor has already punched above its weight at an American film festival.

Outside the Ring is a 28-minute documentary about the Shape Your Life boxing program at the Toronto Newsgirls Boxing Club, the only boxing gym in Canada that is owned and operated by a woman. The documentary was screened at the Shadow Box Film Fest in New York City, where it was a finalist in the Best Short category. Cathy van Ingen, an associate professor in the Brock kinesiology program, was instrumental in starting the Shape Your Life program in 2007, and she figures prominently in the documentary.

The film documents a unique recovery program in Toronto for participants who identify as cisgender, trans or genderqueer and who have survived violence. The film chronicles the healing that takes place when the boxers step into the ring.

“The documentary breaks the silence around violence in communities where violence resides,” says van Ingen. “Women in the film were saying ‘I want to talk about this, I want to talk about the impact of violence on me.’ Seeing a film filled with trans bodies, middle class folks – it’s so important to find that kind of supportive community where we can build our strengths.”

Outside the Ring will premier in Canada at the Canadian Sport Film Festival on May 18 at noon at the TIFF Bell Lightbox in Toronto. It will also screen June 1 at 5:15 p.m. at the Inside Out LGBT Film Festival in Toronto, and it has been accepted in the Documentary Short category for the Toronto International Film and Video Awards.

A trailer for the film can be seen here.

Once Outside the Ring has completed the circuit of film festivals, it is hoped that copies of the documentary will be placed in libraries, schools and community organizations.

More than 800 women have participated in the Shape Your Life program since it began seven years ago with a grant from the Attorney General’s Office. To launch the program, van Ingen partnered with Savoy Howe, who runs the Toronto Newsgirls Boxing Club, and Joanne Green from Opportunity for Advancement, which works with socially and economically disadvantaged women. There are always waiting lists for the program.

Shape Your Life relies on grants and donations to operate. A funding application recently has been made to Safer and Vital Communities, through the Ontario Ministry of Community Safety and Correctional Services, to work with cisgender and trans women involved in the criminal justice system.