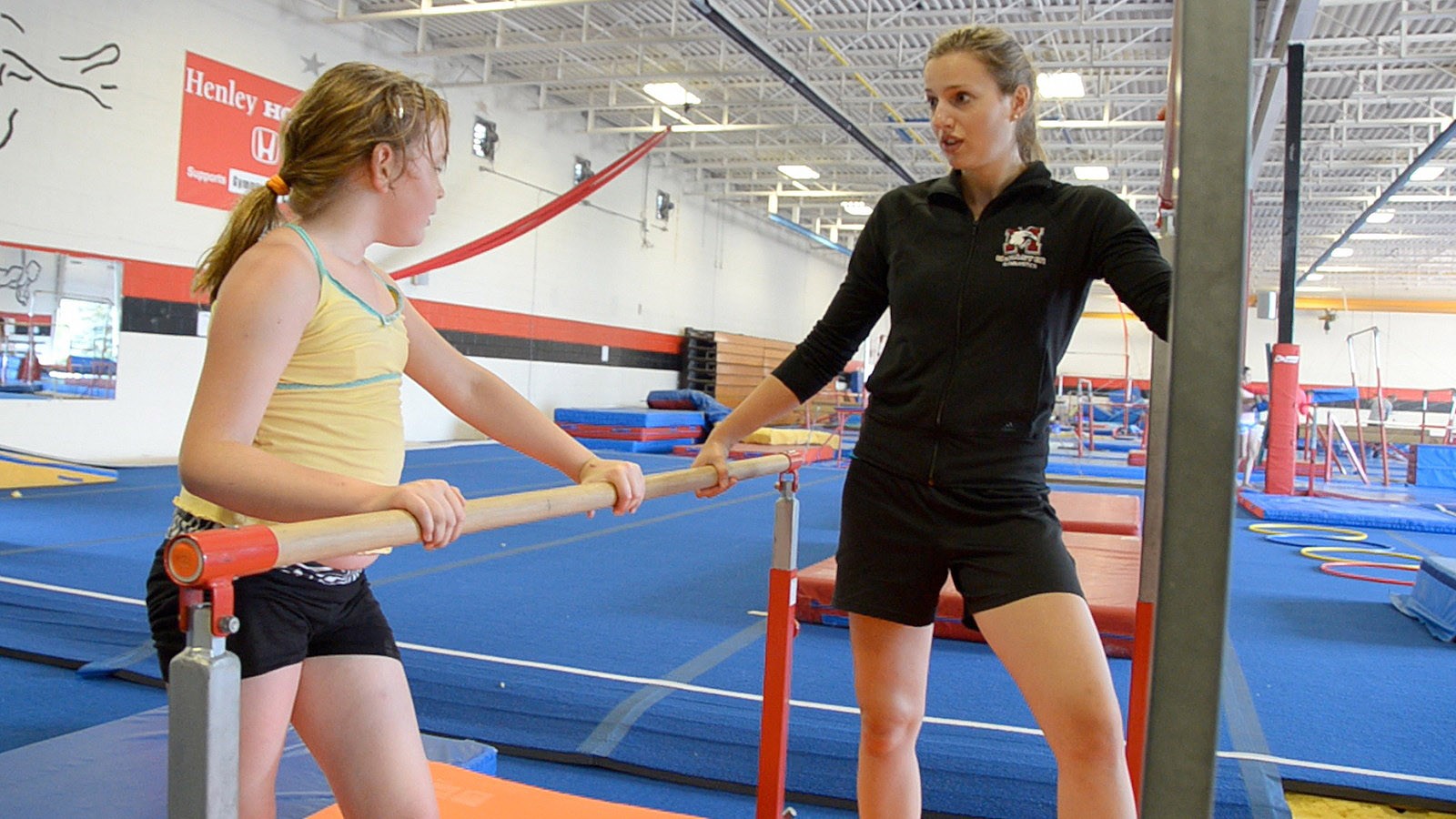 Olivia Cook (right) and Brock kinesiology Prof. Nota Klentrou are on the verge of launching the Can-Flip program, the only initiative of its kind worldwide geared specifically for children living with Cerebral Palsy.

When children’s gymnastics coach Olivia Cook was in secondary school, a young girl came to Cook’s club looking to enroll in a gymnastics program. The club hesitated – it couldn’t guarantee the safety of the child due to her disabilities. Cook was deeply moved.

“I had to complete my volunteer hours for high school, so I volunteered to coach her one-on-one after my regular classes, ” Cook recalls.

But then a funny thing happened. Both Cook and the girl’s parents began to notice improvements in the child’s behaviours, motor skills and other areas as the gymnastics coaching progressed.Fast-forward two years. Cook and kinesiology Prof. Nota Klentrou are on the verge of launching the Can-Flip program, the only initiative of its kind worldwide geared specifically for children living with Cerebral Palsy (CP). For Klentrou, it’s a defining moment.

“Gymnastics was never viewed as something that people with mobility difficulties could actually handle,” she says. “Parents think it’s a dangerous sport.
“They see the aerials and all the difficulties performed by high-performance gymnasts and they think it could be dangerous for their child and perhaps leading to injuries.”

The collaboration between Klentrou and Cook began a couple of years ago when Cook, then a second-year student at McMaster University, approached Klentrou, who is an expert with the International Gymnastics Federation. They put together a research proposal and pilot program that the Ontario Federation of Cerebral Palsy funded.

“We didn’t even know if actually this could be implemented. Can these kids safely practise the sport of gymnastics?” recalls Klentrou.

From there, Klentrou and Cook developed a manual and recruited five children living with CP as research participants. The Mayo Clinic defines CP as being “a disorder of movement, muscle tone or posture that is caused by an insult to the immature, developing brain, most often before birth.”

Beginning last summer, Cook coached the children in classes that typically began with a group warm-up of general stretching and locomotion exercises, followed by individualized sessions on the vault, bars, balance beam, floor exercise and trampoline, ending with a group cool-down of stretching.

“The specifics of what we did on each of the apparatuses varied a lot for each child,” explains Cook, adding that the extent of each child’s muscle flexibility, strength, range of motion and spasticity determined the exact exercise program.

During the course of the gymnastics coaching, the children came to Klentrou’s laboratory three times, where a research team of professional kinesiologists and students conducted a number of tests on the children to assess potential changes in their muscle strength, flexibility, balance and other functionalities.

Tests included gait analysis, which assesses a person’s ability to walk, and electromyography, which evaluates and records the electrical activity produced by skeletal muscles. Klentrou says the results so far have been “promising.”

But, she adds, what makes the program particularly successful is the changes in the children’s self-esteem and satisfaction levels.

Parent Tina Reeson, whose daughter Paige participated in the research, calls the research and Can-Flip program a “fantastic opportunity” for her child.

“Paige enjoyed herself so much,” says Reeson. “Her strength definitely improved and, more importantly, her balance.
“Oftentimes when you have a disability like CP, it’s the little things that are a victory. Seeing Paige being able to step up onto the large mat and keep walking without falling was just such a victory. Her fist pump to signal this accomplishment sealed the deal.”

Cook says it’s important that children living with CP or any other physical challenge not be “coddled” because of their situation.

“They are no different than any other kid; they need to be challenged. That’s what I was doing with each and every one of them.”

Cook has presented the research’s results at some local conferences, and Klentrou will present the program to international conferences during the summer. Klentrou has been in contact with the International Gymnastics Federation to promote Can-Flip worldwide. Both Cook and Klentrou plan to expand this research over the next couple years.