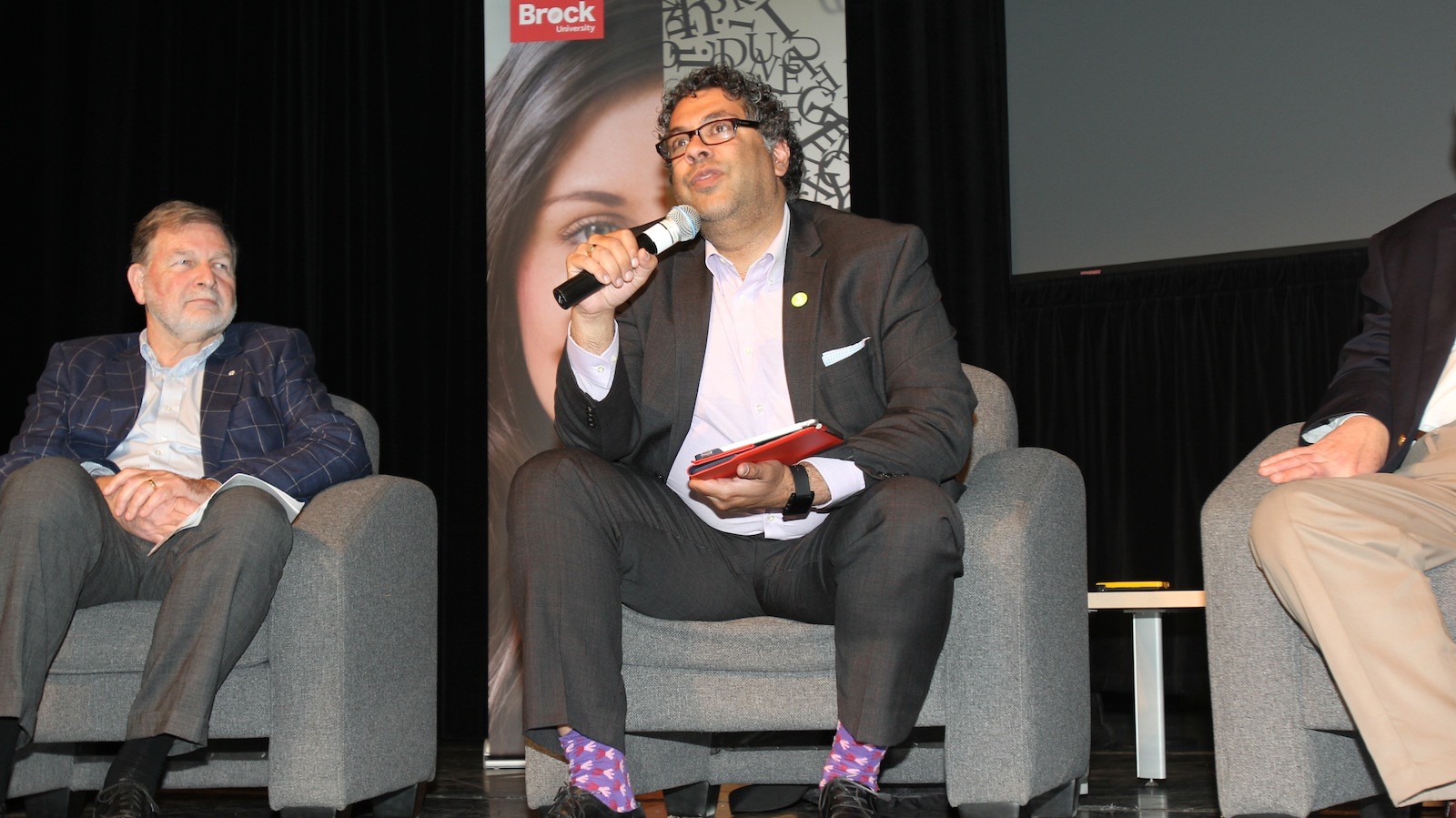 From left: Alan Broadbent, chairman and founder of Maytree foundation; and Calgary Mayor Nahee Nenshi today (May 29) at COngress 2014. From left: Alan Broadbent, chairman and founder of Maytree foundation; and Calgary Mayor Naheed Nenshi today (May 29) at Congress 2014.

Calgary’s Mayor Naheed Nenshi stopped by Congress at Brock today to weigh in on the hypothetical question, “if mayors ruled the world?”

The session, organized by professor Livianna Tossuti and chaired by professor David Siegel from Brock, was part of the University’s “Congress Plus” cultural and academic program for Congress 2014.

Nenshi opened his remarks by noting the last time he attended Congress was four years ago, just one week after he decided to run for Mayor of Calgary.

“So I made the announcement and then I went to Montreal to deliver a paper,” he told the crowd of more than 80 people gathered in the David S. Howes Theatre.

Nenshi then shared his perspectives on some of the major themes put forth by Barber in both his book and his talk from earlier in the day.

The first was the idea of post-partisanship at the municipal level.

“I always thought that the line was original to me, that it is neither a left-wing nor a right-wing idea, that the snow should be cleared off the street,” said Nenshi. “And I read in Dr. Barber’s book that lots of mayors have said that for a long, long, long time.”

He noted that at the municipal level in bigger Canadian cities, debates tend not to be motivated by ideological or partisan beliefs, but rather based on financial reality. What works? What doesn’t work? How much money do we have in order to do this?

In response to right-versus-left partisanship, Nenshi noted: “Those kinds of questions are just not relevant to peoples’ lives. The only people who care about that are people in journalism, political science, professors and the media.”

“If you look at my twitter feed you’ll see that I am excoriated every day for being a socialist or a fascist. I get to be both,” he said. “And I think that that is really the way we need to move in the world, and unfortunately the ways in which the other orders of government are not moving.”

On the issue of diversity in major urban centres – another key point in Barber’s book – Nenshi notes, that at the municipal level, “we don’t have the luxury to have policy debates about immigration and diversity.”

“It exists, and it is unambiguously good,” he said. “Our cities work because we attract talent from around the world. And our job as people in cities is to ensure that everyone has a dignified opportunity within our cities.”