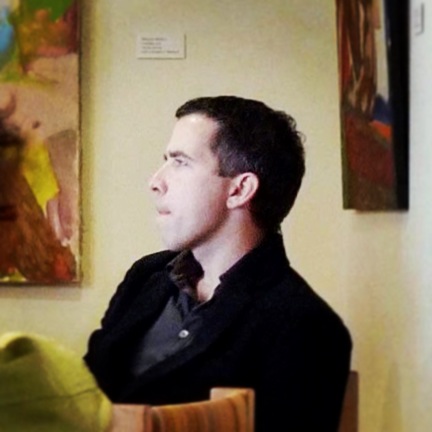 Now in it’s third year, the Brock-Fulbright Research Chair in Transnational Studies program aims to bring to the University some of the best U.S. scholars studying North American issues and the movement of people, things and ideas across the border.

The latest visiting scholar to fill the post, Kaplan Harris, is no stranger to this cross-border niche.

The associate professor of English from St. Bonaventure University in Western New York is a leading scholar in the study of North American poetry and publishing, and the cross-national networks of small press print culture.

“When you start studying literature the first things you usually focus on are single authors or movements, the great canon and so forth,” explains Harris. “With my research, I’m not just looking at the form and content of the literature, but also at the cultural production, circulation and consumption of the work.”

While at Brock this semester, Harris is teaching a third-year course on small press magazine networks in the University’s Canadian Studies program.

He and his students are looking at small press do-it-yourself literary magazines from Canada, the US, Mexico, England and Australia. Their aim is to shine a light on how poets, editors and publishers from those international publications got in contact with one another and how they were reading and publishing each other’s work.

Harris notes that digital tools and approaches influenced by the digital humanities are allowing people to get a much different picture of literature. For example, in just one of his classes this term, his students looked at about 1,200 issues of Poetry magazine, a leading century-old monthly poetry journal first published in Chicago in 1912.

“The idea was that we assigned each group a decade,” says Harris, “and they were asked to go through and collate some data about contributors for each issue, and to look at the distribution of authors based on where they came from.”

The result of the exercise was a graph of networks that told “a history of the 20th century based on where contributors to the magazine were coming from,” he says.

Additionally, Harris is co-ordinating an evening of American poets visiting St. Catharines for the Grey Borders Reading Series on Wednesday, March 26, and he will also deliver the Brock-Fulbright public lecture at the 2014 Congress of the Humanities taking place this spring at Brock.

Some of Harris’ recent scholarship on poetry and poetics appears in journals such as American Literature, Contemporary Literature, Jacket2, Open Letter and Paideuma. He has essays forthcoming in the Cambridge Companion to California Literature and Cambridge Companion to American Modernist Poetry. And he is also co-editor of the recently released, The Selected Letters of Robert Creeley (University of California Press).

Brock’s Centre for Canadian Studies is hosting the current Fulbright Chair because Harris’ work aligns with their Master’s in Canadian and American Studies, which considers the deep significance of Canada’s relationship with its southern neighbour.

“Brock is becoming a leader in border studies,” says Gregory Betts, director of Canadian studies, “particularly in the study of the Canadian and American border.”

“Professor Harris studies the material factors in publishing and the movement of ideas across international borders and between literary communities,” says Betts. “His time at Brock represents a wonderful opportunity for our students to gain real insight into the possibilities of interdisciplinary research in Canadian and American studies.”

The Canada-U.S. Fulbright program allows U.S. scholars to spend an academic year at Brock. The interdisciplinary visiting Research Chair in Transnational Studies covers such fields as Canada-U.S. relations; cross-border culture; First Nations cultures and languages; the history of the cross-border region; and the image of Canada abroad.