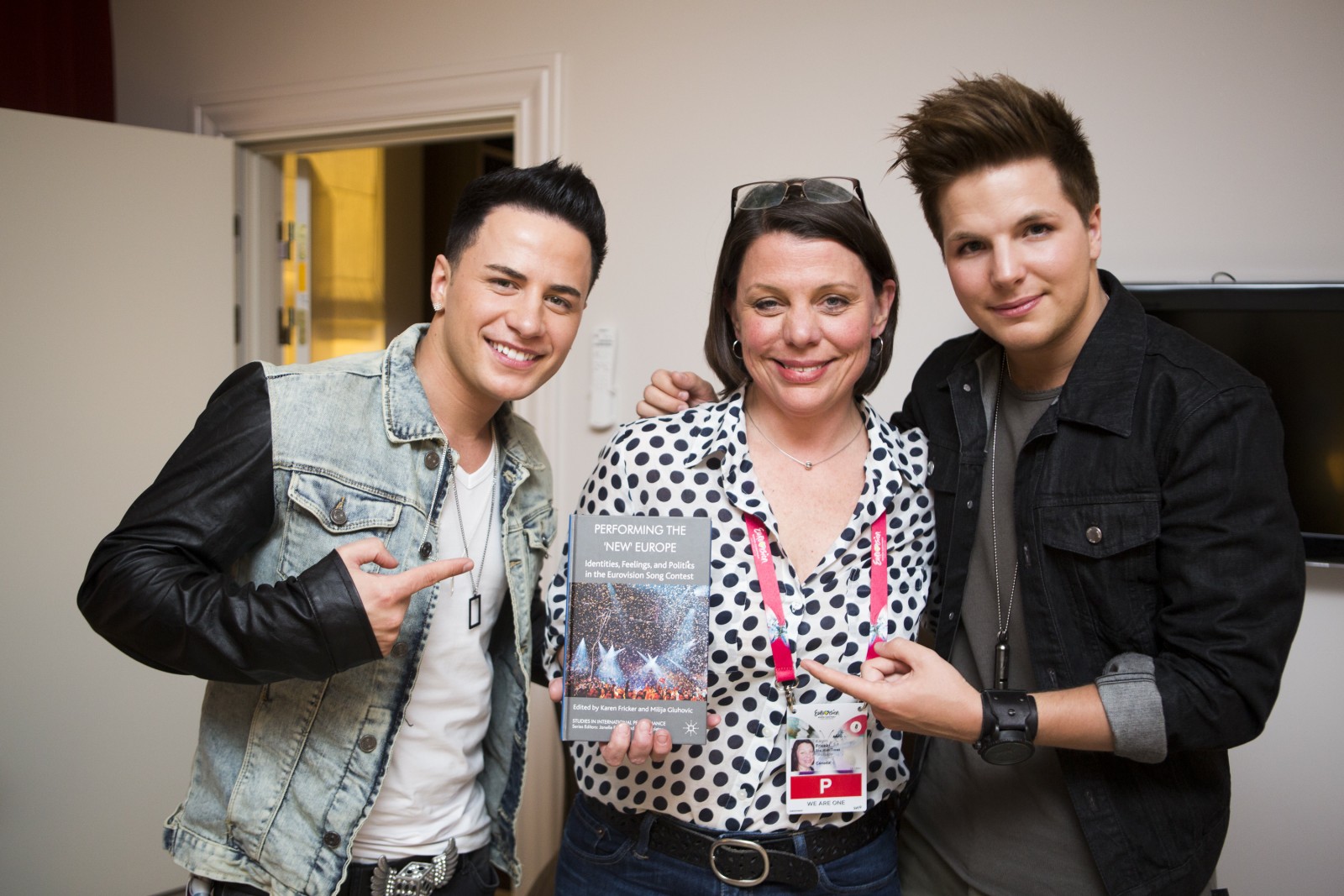 Eurovision performers Ryan Dolan of Ireland (left) and Robin Stjernberg of Sweden give Prof. Karen Fricker and her new book about the Eurovision Song Contest the OK. Photo by Lisa Wikstrand. Eurovision performers Ryan Dolan of Ireland (left) and Robin Stjernberg of Sweden give Prof. Karen Fricker and her new book about the Eurovision Song Contest the OK. Photo by Lisa Wikstrand.

Fricker, assistant professor of dramatic arts at Brock, spent a week last May in Malmö, Sweden, where she launched her co-edited book Performing the ‘New’ Europe: Identities, Feelings and Politics at the Eurovision Song Contest, at the heart of the annual pop song festival, which is watched by an estimated 170 million people globally.

The Eurovision contest is “a venerable cultural tradition based on the fabulously frivolous premise of choosing Europe’s favourite pop song,” Fricker writes in her blog.

“While Eurovision music is often critiqued as out-of-date and market-unfriendly as live entertainment broadcasting, the contest is state-of-the-art, and it’s fascinating to see what innovations are experimented with each year,” she adds.

Fricker also gave a keynote address at the conference, “A Transnational Vision for Europe?” at Malmö University, as did her co-editor Milija Gluhovic (University of Warwick, U.K.).

With the launch of the book, published by Palgrave Macmillan, and the conference, Fricker attracted considerable international media attention as a Eurovision expert. She has also covered the contest as a journalist for the Irish Times for the past nine years and wrote a blog post this year for the Guardian about the U.K. and Eurovision.

Fricker is travelling in continental Europe and Ireland – some work, some play – but spoke to The Brock News via email.

TBN: You’ve spent a lot of time and done a lot of research on the Eurovision Song Contest. What attracted you to it?

KF: I first encountered the contest in Ireland in the early 2000s and was captivated by the idea of an Olympics of pop songs. I soon realized the contest is a unique annual celebration of European unity (and disunity!) and an occasion for the performance of all sorts of identities – familial, national, regional and gendered.

TBN: And is this what led to the May launch of the book you co-edited with Milija Gluhovic?

KF: My first Eurovision research project (2005-07) was about fandom, and this recent project, which was funded by the Arts and Humanities Research Council in the U.K., looks at the relationship between the contest and changes to Europe since the fall of the Berlin Wall. The main outcome of this project was the co-edited book Performing the ‘New’ Europe.

TBN: Can you tell us a little about the book?

KF: The book has nine chapters by different scholars and contest stakeholders, looking at the contest from a variety of national, cultural and disciplinary perspectives. For example, we have a chapter on Russia’s strategic use of the contest to advance the Putin regime’s political and cultural agendas; several chapters about the strong feelings – positive and negative – the contest engenders in viewers; and other chapters reading images of femininity and masculinity in the contest for what they say about gender, sexuality and power in the ‘new’ Europe. And that’s just a sampling!

TBN: You also gave a keynote address in Malmö this year?

KF: Milija and I were keynote speakers at an international Eurovision conference, presenting versions of our own book chapters. I spoke about the U.K.’s fraught relationship to the contemporary (Eurovision contest), arguing that this reflects a crisis of post-imperial collective identity. Milija discussed the ways in which the contest has been connected to human rights and lesbian, gay, bisexual and transgender activism in Azerbaijan and Serbia.

TBN: Where will you go from here?

KF: I have been attending the contest as a journalist as well as scholar since 2005, which has been an amazing experience: nine European cities, nine intense, unique, and endlessly entertaining competitions. The publication of this book marks the end of my current contest research, and now I need to focus on other projects, in particular finishing a book about the Québec director Robert Lepage. However, I will be looking for angles to get to Denmark next May for Eurovision 2014. It’d be hard to leave the contest behind.