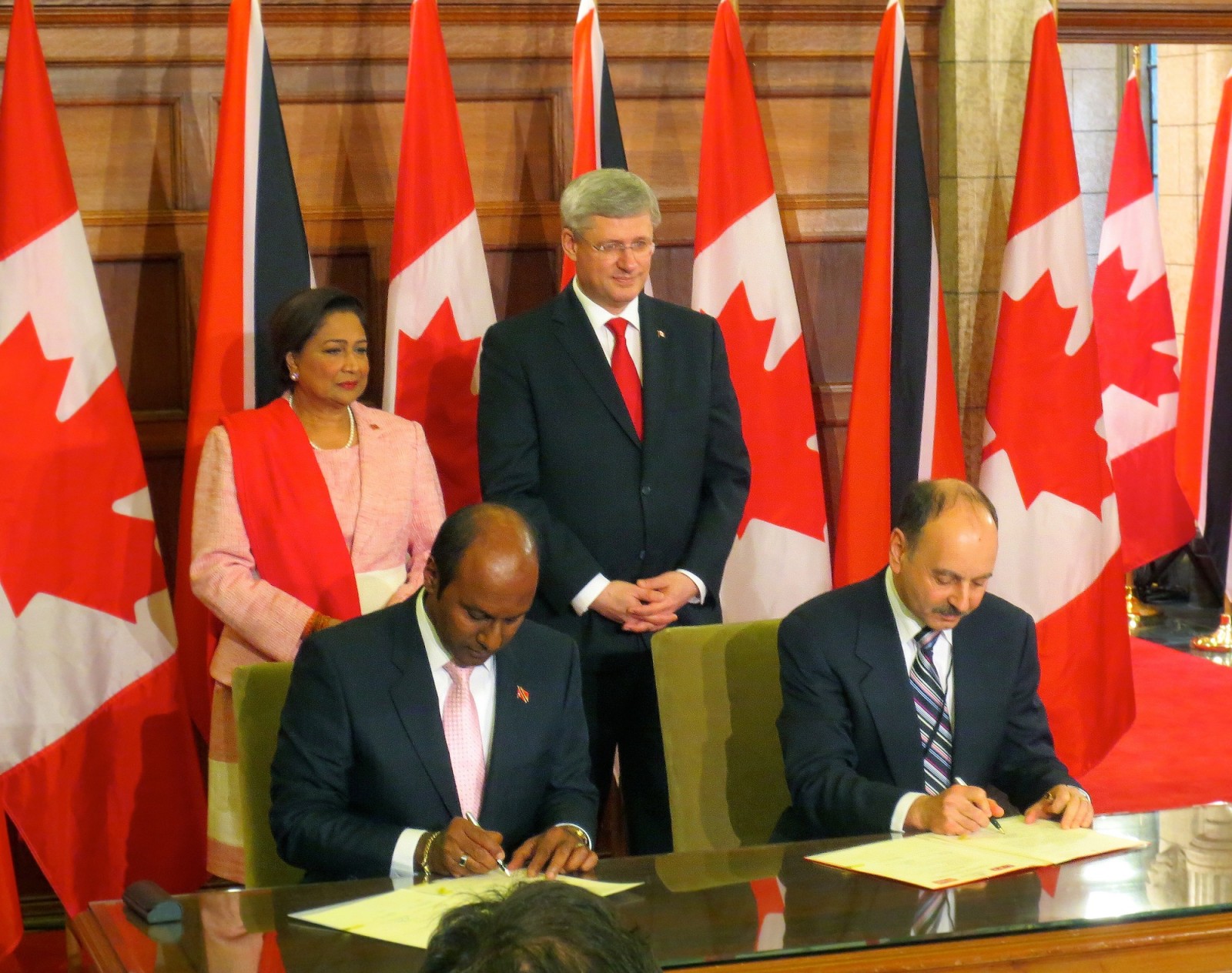 With two prime ministers acting as witnesses, Brock University today signed an accord with the University of Trinidad and Tobago (UTT) aimed at accelerating levels of collaboration between Canada and its Commonwealth partner in the Caribbean.

In a ceremony on Parliament Hill, Prime Minister of Canada Stephen Harper and Trinidadian Prime Minister Kamla Persad-Bissessar witnessed the signing of the memorandum of understanding between both schools by Brock University President Jack Lightstone, and Curtis Manchoon, Chairman of the UTT Board of Governors.

The MoU creates a mechanism to pursue partnerships and exchange opportunities between the two universities, and could have impacts that go beyond their campuses.

Prime Minister Persad-Bissessar said the pact will help cement the relations necessary to ensure the advancement of information and knowledge sharing.

“The potential for economic, cultural and social capital is limitless,” she said. “Education is the key to peace and I look forward with interest and excitement to the endless possibilities that this partnership promises. I am confident that this collaboration will further deepen and strengthen the ongoing relationship between our two nations.”

The MoU was crafted following a visit to Trinidad and Tobago last February by Lightstone and Brian McMullan, the mayor of St. Catharines, Ont., where Brock’s main campus is nestled on the Niagara Escarpment. The trip marked the 45th anniversary of the twinning of St. Catharines and the Trinidadian capital Port-of-Spain. It also enabled Lightstone to meet with UTT President Fazal Ali.

They discovered a mutual desire to create exchange opportunities in several disciplines, including areas where Brock has world-class teachers and researchers, such as plant biotechnology and green chemistry; public and community health; animation and digital media; and education and teacher training. Last fall Brock opened the $112-million Cairns Family Health and Bioscience Research Complex, home of some of the most advanced facilities in central Canada. The iconic project received $38-million in funding from the federal government’s Knowledge Infrastructure Program.

The new relationship could also see Brock students going to Trinidad for various studies, including cultural, social and instructional advancement.

“The collaboration fits perfectly with Brock’s mission to help improve the social, intellectual and economic health of communities in Niagara, in Canada and beyond,” said Lightstone. “This pact is possible because of the vision and perseverance that led to the twinning of two cities nearly half a century ago. We hope today is the first step in an era of partnerships that advance not just two universities, but two countries.”

Manchoon said UTT is looking forward to “mutual growth and cooperation as a result of this strategic partnership.”

“We shall seek to promote international and intercultural understanding, relevant research, and valuable exchange between the two institutions for the benefit of our students, staff and by extension, our respective nations.”

A relationship between Brock University and Trinidad is not new. For two decades, Brock has welcomed and supported opportunities for eligible students from Trinidad and Tobago. Since 1993, six Trinidadian students have been awarded a four-year undergraduate scholarship at Brock. There are currently 12 Trinidadians at Brock studying in disciplines that include biomedical sciences, child and youth studies, and business administration.

Rick Dykstra, MP for St. Catharines, called the MoU “a tribute to the work of Phil Atteck and others in in the St. Catharines Twinning Association. We anticipate this spirit will only continue to strengthen our communities.”