Clown doctor in the house this summer at Brock 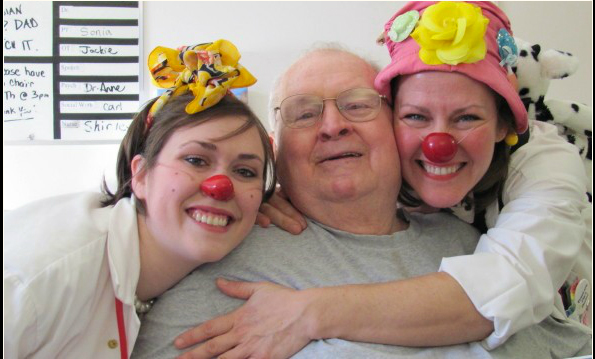 The Art of the Clown Doctor is one of several unique courses being offered during the spring term at Brock. Photo by Fools for Health The Art of the Clown Doctor is one of several unique courses being offered during the spring term at Brock. Photo by Fools for Health

Bernie Warren is certain he knows the most honest physician in Canada.

“You can ask him any question you like and he will answer it honestly – ‘I haven’t a clue,'” said Warren, a professor at the University of Windsor’s School of Dramatic Arts.

Aptly named Dr. Haven’t-A-Clue, the mystified medic doesn’t do much to instill confidence in someone needing medical advice. But when it comes to writing a prescription, Dr. Haven’t-A-Clue – Warren’s alter ego – has a knack for getting it right. Laughter, he knows, is the best medicine. Bernie Warren, a clown doctor and drama professor at the University of Windsor, will be teaching the Art of the Clown Doctor at Brock in May.

Warren is a clown doctor and festooned with a red nose as Dr. Haven’t-A-Clue, he has spent years lightening the mood in places fun often forgets: hospitals, nursing homes and hospices.

It’s not always an easy job but Warren, a PhD who has an extensive background in the performing arts, has his PhD in psychology and theatre, and has trained in group and family therapy, maintains someone has to do it.

That’s why, after spending 10 years running the charity, Fools for Health, and “practising” as Dr. Haven’t-A-Clue, he travels the world training other clown doctors. This summer, he’ll be making a stop at Brock University to teach the Art of the Clown Doctor (DART 3V91), an intensive, six-day course about the practice of clown-doctoring in lifespan maintenance and therapeutic environments. The course is part of the newly expanded spring term offerings at Brock.

Being a clown doctor isn’t about donning a Ronald McDonald getup and driving an awkwardly small car, though.

It’s about knowing when to be “appropriately inappropriate” and how to interact with healthcare workers, Warren explained. Being able to work with people of different ages in situations that aren’t laughing matters and yet knowing how to put a smile on people’s faces anyway is also necessary.

“It’s not about putting on a nose, funny shoes and a costume and running wild in a hospital,” said Warren, who has trained 200 students in clown-doctoring at Windsor. “It is quite difficult and not everyone is cut out for it.”

Still, the benefits of offering up a smile to a senior with dementia, a person about to have surgery, a scared child who is visiting a hospital for the first time or the family of someone who’s dying are undeniable, Warren explained.

“Tension, anxiety and stress don’t help,” he said. “Anything you can do to reduce that, there’s a chance to increase the speed of recovery.”

As a researcher, Warren spent time recently working with seniors with dementia. In many cases, the seniors didn’t know the date, time or their family, but Warren discovered the clowns had a knack for triggering these and other memories.

“By reconnecting with those moments, they’re able to metaphorically walk a bridge between childhood and present day, and along the way, collect memories.”

Still, clown doctoring is as much about brightening the day of medical staff as it is serving patients, Warren said.

“You see a patient three times a week for up to 20 minutes each visit. That’s a very small drop in the ocean, whereas if you change the atmosphere of the hospital and change the mood of staff, that lingers throughout the day,” he said.

“The focus should be on helping staff reduce their stress first and foremost and that has a ripple effect in health care.”

The Art of the Clown Doctor runs May 8 to 14 and is open to dramatic arts students and anyone with an interest in clowning in health care.

Read Super Spring will be bursting with new course offerings