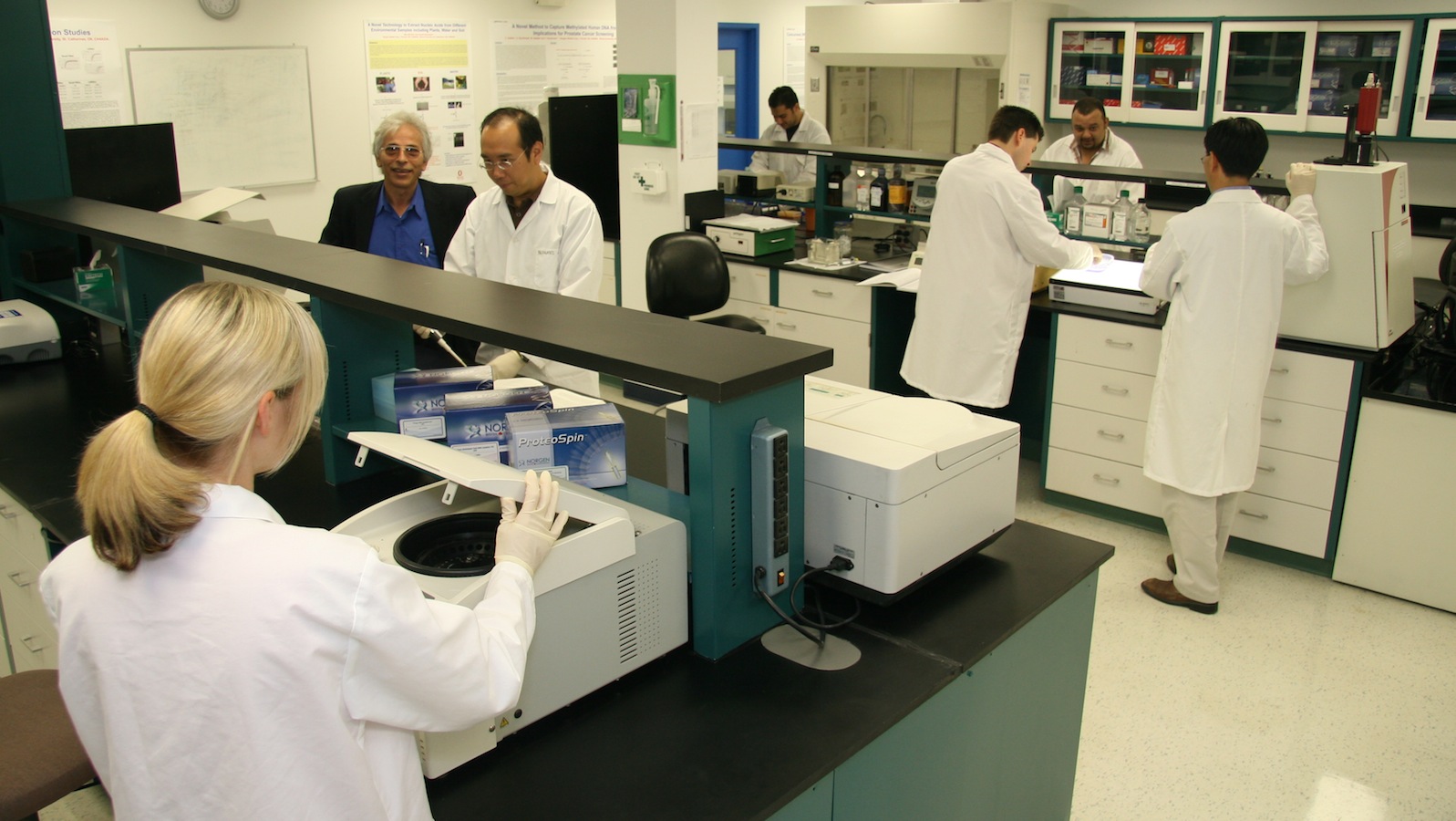 Inside the Norgen Biotek lab in Thorold. Inside the Norgen Biotek lab in Thorold.

“I’m delighted that they recognized Norgen,” says Haj-Ahmad, who is a biology professor.

“It’s for the good people I have – very talented, good people who are all Niagara residents, most of them Brock University graduates. They’re very happy to be employed in their area of expertise right here in the Niagara region. They don’t have to leave Niagara to find a good job.”

Haj-Ahmad joined Brock in 1989, fresh from a laboratory position at Labatt Brewing Company in London, Ont. While there, Haj-Ahmad formed a biotechnology company that eventually went public.

His company moved to Montreal but he stayed in St. Catharines. Haj-Ahmad sold his shares and used the money to start Norgen Biotek in a little building in Merritton.

Most of Norgen’s work initially focused on providing biotechnology services, such as DNA sequencing for local laboratories, and building up research and development capacity.

The company then began to create and sell biotechnology products, which was slow-going at first.

“We would be pretty excited if we had one order every couple of weeks or every month,” recalls Tom Hunter, a Brock graduate and Norgen’s first employee.

“A major difference is in the intensity of the things that we do now, the massive explosion in products that we’ve developed,” says Hunter, the company’s sales and marketing manager. “We now have over 400 products – a wide scope of different kits to meet any sample preparation challenge for our customers – plus additional services.” Wade Stayer, member of the Greater Niagara Chamber of Commerce board of directors, congratulates Prof. Yousef Haj-Ahmad for winning the chamber's Business of the Year award last month.

One of Norgen Biotek’s most widely used products is a kit that consists of tools and materials to collect human samples – saliva, urine, blood, tissues – and preserve them without the need for refrigeration, dry ice or the samples being frozen.

Haj-Ahmad says Norgen Biotek is the only company in the world that has developed a preservative for urine samples, and one of two companies worldwide that offers preservatives for blood and saliva samples.

Norgen also offers “first-in-class” tool kits to isolate DNA, RNA, or protein from these samples to detect pathogens, cancer, genetic diseases, Hepatitis B, HIV, syphilis or other conditions, he added.

And this has enormous implications for locations throughout the world where refrigeration, laboratory facilities, or shipping services are limited.

“Currently there is no product out there to do molecular-based diagnostics in resource-limited settings, say in Saharan Africa or the rainforest in the Amazon, or way up north,” says Haj-Ahmad. “If you want to do molecular diagnostics, you still have to collect the specimens and ship them to centralized labs similar to LifeLabs.”

Haj-Ahmad says Norgen is developing kits that would allow anyone to collect, process, and make a diagnosis from human samples in the privacy of patients’ homes. He envisions these kits to be inexpensive, simple to use and yielding results within an hour.

That could lead to bodies, such as the World Health Organization, purchasing and distributing these kits in developing countries if they are inexpensive, he says.

Most of Norgen’s current customers are universities, hospitals, and biotechnology and pharmaceutical companies in the U.S., with sizable client bases in the United Kingdom, Germany, Denmark, Brazil, Japan and Malaysia.

For Haj-Ahmad, Norgen Biotek is a 14-year-old dream come true – a dream with a hefty price tag.

“Biotechnology is not really a get-rich-quick scheme. You don’t get rich overnight,” says Haj-Ahmad. “I borrowed money, I mortgaged my house, I put in all kinds of resources into Norgen.