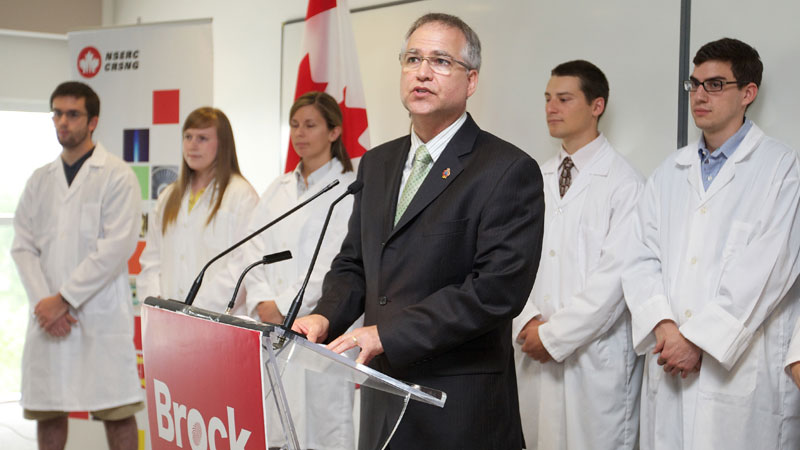 A Brock researcher whose work helps us understand how we recognize one another was given national acknowledgment today during a federal funding announcement at Brock.

Psychology professor Catherine Mondloch was honoured during the announcement as the recipient of one of only a handful of Discovery Accelerator Supplements from across Canada. The grant is given annually by the Natural Sciences and Engineering Research Council of Canada (NSERC). (See a full list of Brock grant recipients.)

Gary Goodyear, Minister of State (Science and Technology), came to St. Catharines Friday to make the announcement, which included more than $411 million in funds awarded to researchers across Canada through several NSERC programs.

Eleven Brock researchers and nine Brock graduate students were awarded funds under the programs for their ongoing work on complex projects that have implications for human health and a better understanding of the natural world.

Mondloch received a five-year Discovery grant, as well as the three-year Accelerator grant, which will allow her to hire a postdoctoral student with the expertise to run the complex 3D and 4D cameras and related computer software used in her work on face perception.

Her research group is interested in how children develop the ability to recognize faces, and how that ability is influenced by experience with different face categories. This research becomes important in an increasingly mobile and global world, since investigations to date have shown that peoples’ ability to recognize others decreases for other-race faces.

In 2009, the implications of this inability came to light when Suaad Hagi Mohamud, holder of a Canadian passport, was detained in Kenya on suspicion of identity fraud. Officials held her for three months in Nairobi, claiming she did not look like the person in the passport photo, before DNA testing cleared her and she was allowed to return to Canada.

“The Discovery Accelerator Supplement will catapult our work on face recognition to the next level as my research group capitalizes on the resources made available by this program,” Mondloch said during the funding announcement.

“We are delighted to see our researchers being recognized in this highly competitive environment,” said Ian Brindle, Vice-President Research. “We appreciate that there is stress involved because there are so many people across Canada applying for this funding. This shows an acknowledgment of the high quality of research coming out of Brock, including the prestige of the Accelerator grant for Catherine Mondloch.”

“Our government is investing in the people and ideas that will produce tomorrow’s breakthroughs in order to keep Canada’s economy growing and create new jobs,” Goodyear said.