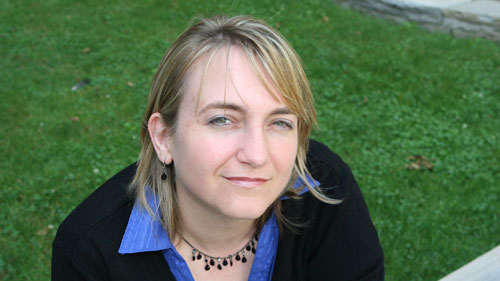 Samantha Craggs is a Brock University communications and news media specialist who decided to try her hand at fiction-writing.

She’s off to an excellent start.

Craggs, a writer and web editor in University Marketing and Communications department, is one of the top three winners in the Toronto Star 2011 Short Story Contest, the most competitive event of its kind in Canada.

She received her award Wednesday (April 27) in a ceremony at the Toronto Reference Library, where she shared the podium with first-place winner Toronto novelist Richelle Kosar, and University of Toronto physicist Erik Martinez, who won second prize.

Craggs, a former newspaper reporter who joined Brock’s Communications staff in 2009, won for her submission Drinking in the Basement. Set in Niagara Falls, N.Y., it is the story of a frustrated wife dealing with her husband’s alcoholism.

She said she was “stunned” when she was contacted and told she was a finalist.

“It still hasn’t really sunk in,” she said after this week’s ceremony. “Fiction writing is a labour of love. It’s a whole lot of rejection, even for the best of them, so to get a ‘yes’ like that was amazing.

“I was especially happy to get the chance to mention Brock University.”

Now in its 33rd year, the Star’s literary competition is the biggest of its type in Canada and one of the largest in North America.

With national prestige and thousands of dollars in prize money on the table, the competition is stiff. This year’s contest drew more than 2,000 entries from writers — including published authors —across Ontario. Stories must be no longer than 2,500 words.

The first-place winner gets $5000 plus tuition (worth about $3,000) for the Creative Writing Correspondence Course offered by the Humber School of Writers. Second prize is $2,000 and third prize is $1,000.

The winning entries will be published in the Star on three consecutive Sundays, starting May 8.

For more on the story, see http://www.thestar.com/news/article/981646–celebrity-drama-wins-star-short-story-contest