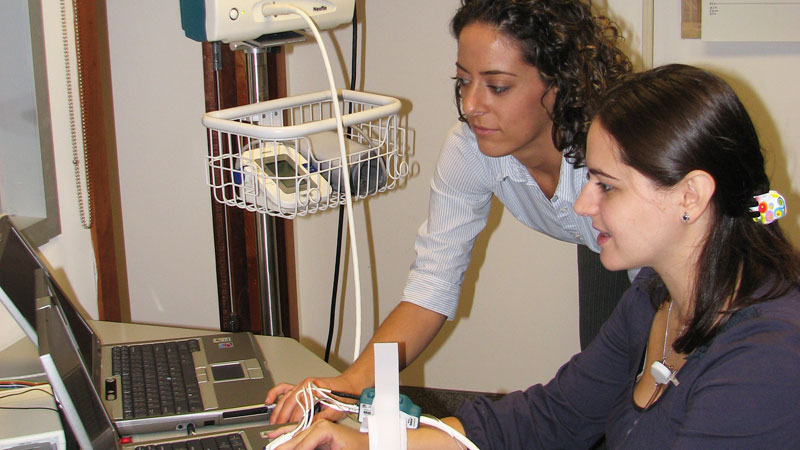 A blood pressure monitor — considerably more sophisticated than those typically used in health-care settings — stands alongside other equipment inside a lab within Brock’s Jack and Nora Walker Canadian Centre for Lifespan Development Research.

This piece of equipment is one of two major additions that are now central to PhD Psychology student Lesley Capuana’s research on aging.

Capuana’s research focuses on the link between heart rate variability and task performance.

“We are finding, along with others, that the greater variability in beat-to-beat intervals that an individual has will lead to better performance on a task,” she said. “We know that heart rate variability is higher in younger adults and declines with age. We want to determine whether this decline is partially responsible for the cognitive declines that often accompany the aging process.”

Capuana will put the monitor to work in the next few months in a study with volunteers from the community, ages 65 to 80, and young adults from Brock. The goal is to understand the relationship between the brain and cardiovascular system in supporting higher-level cognitive functions (attention, memory) and how these change with age.

Participants will sit at a computer and complete a series of attention-demanding tasks. They will wear the new finger cuff monitor that allows blood pressure to be measured non-intrusively throughout the test. This is not possible with standard equipment.

It was also impossible to track the exclusive influence of the sympathetic nervous system on cardiac function — “the fight or flight” reaction. The addition of a technology used to measure impedance cardiography fills this role. Cardiac information will be recorded through sensors attached to the back and chest, similar to a standard electrocardiograph but involving more complex computations.

The acquisition of this new equipment and technology was made possible through recent funding to Prof. Sid Segalowitz and Prof. Jane Dywan, Capuana’s supervisor. They were among researchers at Brock to be awarded a total of $727,012 from the Ministry of Research and Innovation last year to support projects focusing on aging, human health and materials science.

“Equipment like this meets the highest standards in the field and will have meaningful applications for years to come,” Dywan said.

The funding is an investment in Brock’s team of lifespan researchers, including Capuana and several other graduate students. Their research focuses on how the ability to modulate physiological arousal affects the ability to regulate both cognitive and emotional function, including children at risk for developmental disorders through to older adults at risk for cognitive decline.

“Our research provides a window through which we can study the relationship between brain function and physiological arousal,” she said. “From there, people can take the information in a number of directions from promoting the importance of fitness throughout the lifespan to targeting pharmacological applications.”