New online program helps smokers get fit and chill out 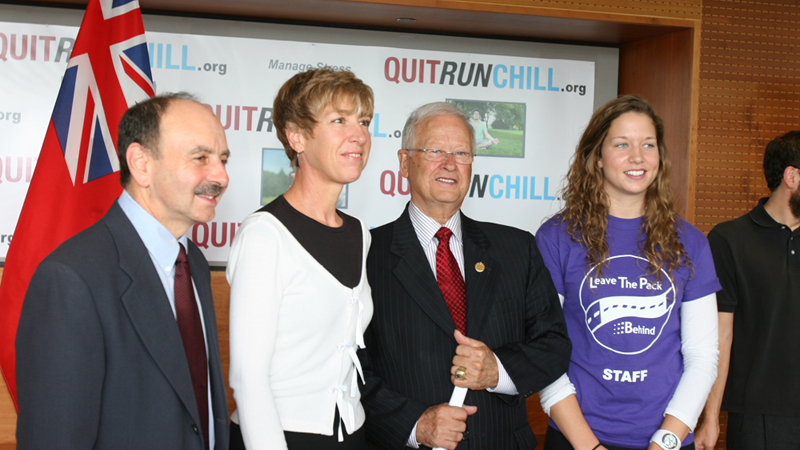 The provincial government and Brock researchers have launched a new online program to help young smokers avoid smoking, be physically active and cope with stress.

The “Quit Run Chill” program was developed with $26,000 from the Ministry of Health Promotion and Sport’s Healthy Communities Fund. It is now being promoted on virtually all post-secondary campuses in Ontario and in many communities.

“This initiative will help older youth and young adults establish and sustain a pattern of physical activity that will facilitate smoking cessation and reduce stress,” said Kelli-an Lawrance, associate professor, Community Health Sciences. “Following the program on its own, or in combination with quitting, will ultimately reduce an individual’s risk of hypertension, Type 2 diabetes and other cardiovascular diseases and contribute to positive mental health.”

Leave The Pack Behind (LTPB), a province-wide peer-to-peer smoking cessation initiative housed at Brock and funded through the Government of Ontario’s Smoke-Free Ontario Strategy, maintains the program.

LTPB operates at all universities and almost all public colleges in Ontario and reaches more than 500,000 students, which accounts for 50 per cent of older youth/young adults in the province.

The launch of Quit Run Chill at the Plaza Building was attended by Jean-Marc Lalonde, Parliamentary Assistant to the Minister of Health Promotion and Sport. The program, Lalonde said, “was created by students for students.”

“This reaches thousands of students across the province with a healthy message: if you smoke, quit. If you’re not active, exercise. If you stress, relax,” he said.

Post-secondary students, supported by Brock researchers and other expert consultants designed “Quit Run Chill.” The program is self-directed and includes eight weeks of fresh information, ideas and inspirations about quitting smoking, being active and reducing stress.