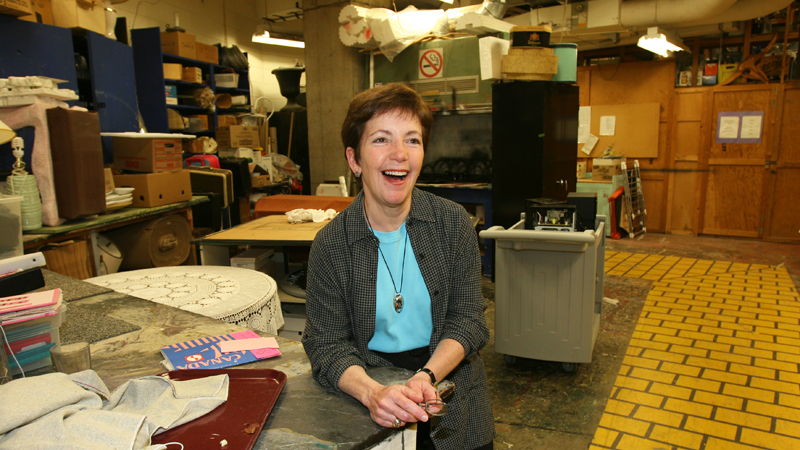 "If we can get people fired up, it'll get bigger," says Virginia Reh, in the props and scenery room for Brock's Dramatic Arts department, of Canadian musical theatre.

Canadian musical theatre is a little like Canadian film and Canadian writing. It takes place in our own backyard, but our brightest stars are often hidden from public consciousness.

Virginia Reh is on a mission to change that.

An assistant professor of Dramatic Arts, Reh is the driving force behind an upcoming conference called Lyric CANADA 2010 from Oct. 21 to 23. David Vivian, associate professor and director of the Centre for Studies in Arts and Culture, is also an organizer.

Most people associate the term “musical theatre” with the lavish, multimillion-dollar American and European productions shown in Toronto, Reh said. But Canada has a rich and varied musical theatre scene that is understudied and underappreciated. Its talents include artists such as Ted Baerg, a renowned London, Ont.-based opera singer who will present a paper at the conference.

“There are hundreds of musicals in Canada, and there are two books written about Canadian musical theatre,” Reh said. “I’m hoping this is the beginning of an ongoing dialogue. I’m a woman on a musical crusade.”

Lyric CANADA is held in conjunction with the Shaw Festival. Its daytime program will be at Brock. Its evening showcases will be held in Niagara-on-the-Lake. The conference’s 30 paper presentations and 10 showcases are open to the public.

The keynote speaker will be Stewart Wallace, a New York-based composer of operas such as Harvey Milk and The Bonesetter’s Daughter. Jim Betts, composer, lyricist and librettist from projects such as Colours in the Storm and Thin Ice, will give the plenary speech “Why Canadians Can’t Write musicals (And Why Almost No One Else Can, Either).” Sarah Schlesinger, a lyricist and librettist who chairs the Graduate Musical Theatre Writing program at New York’s Tisch School of Arts, is also a plenary speaker. She’ll speak about nurturing the development of future writers of musical theatre.

The presentations will not look like typical academic fare, Reh said. Many will use performance and audio-visual materials. She encourages the public to come out and learn about a little-known art form — the Canadian musical.

“Don’t be afraid of it,” she said. “There’s lots of interesting stuff happening, and you may learn something you didn’t know about musicals and opera.”

Reh grew up in New York City and recalls being enthralled by her first trip to a musical. She saw Mary Martin as Peter Pan, and when she went home, she pretended to be Peter Pan flying around her room. She’d like Canadian kids to have the same experience with homegrown culture.

“This is my passion,” she said.