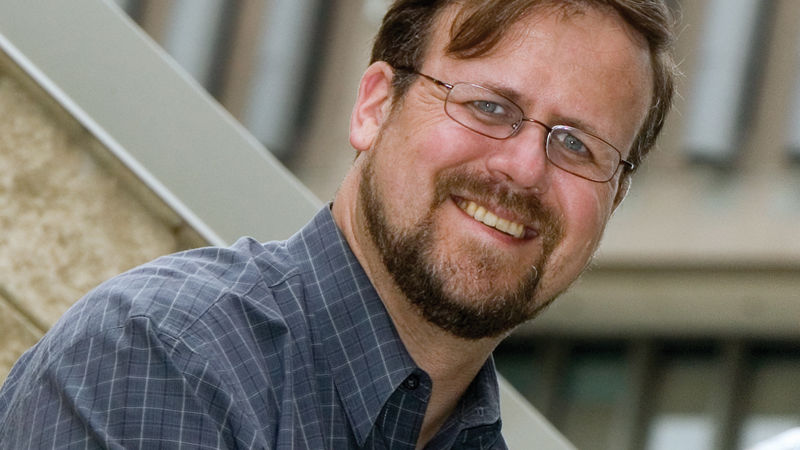 Libraries of the future, John Bonnett says, will be filled with "four-dimensional virtual objects and books that communicate with each other."

The irony was not lost on John Bonnett.

He nearly missed his chance to speak to a House of Commons standing committee on digital literacy because of a technological glitch.

The associate professor of History and Canada Research Chair in Digital Humanities was invited to Ottawa April 27 to speak to a House of Commons Standing Committee focused on emerging and digital media. While he had met the deadline to submit his remarks and PowerPoint in time to be translated into French, when the committee sat down that day to listen, the translated PowerPoint was not available, for reasons unknown.

“However, when I told them that the majority of my slides were images only, with very little text, I was allowed to proceed.”

Those images represent one of the main points Bonnett made with the committee members. That is, literacy in the future will mean much more than a solid command of letters and numbers. Literacy will involve mastering computer literacy, and more specifically, the related ways of representing information in the digital age. New media will move beyond text to representations in 2-D animation, sound images or 3-D objects, he said.

“The library at the start of the 22nd century will likely be a very different place from the one we now know, filled with four-dimensional virtual objects and books that communicate with each other,” he told the committee.

Bonnett was invited to present to the committee, which is hearing from various experts across the country, at the recommendation of Chad Gaffield, president of the Social Sciences and Humanities Research Council of Canada (SSHRC). Gaffield, a former supervisor for Bonnett during his graduate days at the University of Ottawa, also spoke before the committee.

The input from many experts will help shape federal policy development in the area of emerging and digital media, for Canadian cultural industries and determine what assistance federal institutions will offer these cultural institutions and Canadians in general.

While the committee is immediately concerned with issues such as charging levies for downloadable content, Bonnett said his presentation was made to help keep the longer-term consequences in mind. He recommended investing resources, financial and developmental, so Canadians will have “access to easy, intuitive methods to generate multi-media content.” Access to digital content which can be re-purposed to meet the individual’s needs will be critical, he added, as will the need to access the appropriate computational power and related infrastructure.

He concluded by echoing Gaffield’s remarks that Canada’s adaption to the digital era will be led by our country’s youth, so long-term investment needs to start now to assist in the development for years and even decades to come.