A complicated relationship with Ladybugs 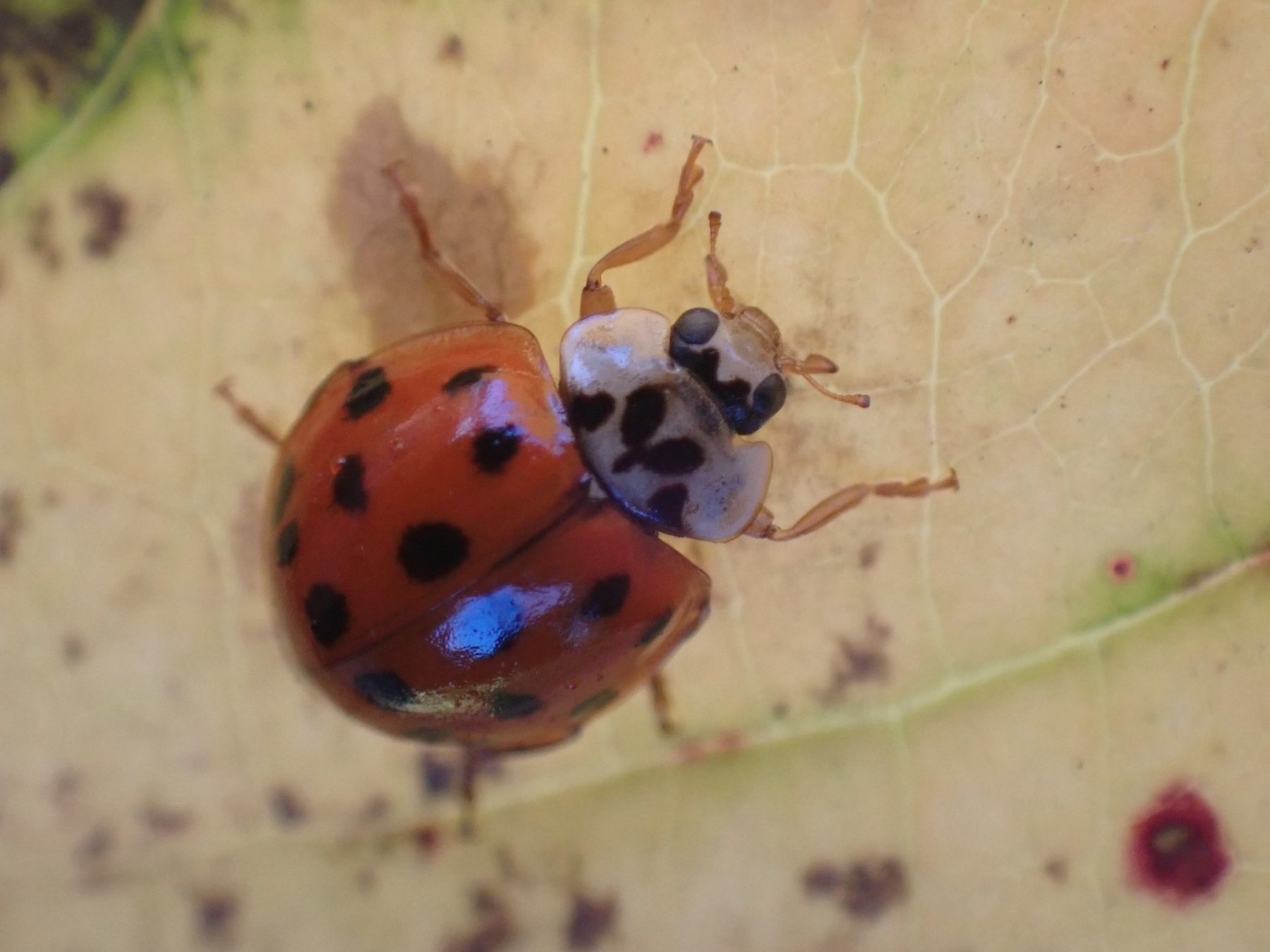 The Multi-Coloured Asian Lady Beetle is considered an invasive species in Ontario, and they can outcompete some of our native species of lady beetles. (Photo: Kasia Zgurzynski)

Submitted by the OSCIII team

In an agricultural setting, insects can sometimes help farmers, while at other times be a nuisance. At first glance, many insects seem to fall into one of two categories: pests that damage crops or beneficials that help support crop production. Ladybugs, on the other hand, have a more nuanced role to play, particularly in vineyards.

Ladybugs, more accurately known as lady beetles or ladybird beetles, can be voracious predators of pest species, eating as many as 5,000 aphids in their lifetime. With insatiable appetites, they can be beneficial to farmers as they act as a natural control for certain insect pest problems. They can even help to reduce the use of pesticides. The adults lay eggs near colonies of soft bodied insects, such as scale, mealybugs, and aphids, which are common vineyard pests. Once the larvae emerge, they immediately feast on the insect prey before searching for even more in the general vicinity. After they pupate and become adults, they travel even further to find food and continue their life cycle. In the right conditions, the adults can live for two to three years.

In vineyards, lady beetles are most beneficial early in the season, when the grapes have not yet developed. Once the grapes develop, though, that changes and this is when they can become a nuisance. The lady beetles begin looking for overwintering areas, and can be found among grape clusters, particularly if those clusters are close to their insect prey. They can feed on fruits that have already been damaged, but they don’t damage the fruit or the vines themselves. The problem, however, is that lady beetles release a yellow fluid with a foul odour, known as methoxypyrazines, when they are disturbed. When grapes are harvested with lady beetles among them, this fluid then has the potential to taint the grapes and create an unpleasant taste in the wine.

They are most likely to release this fluid if they are alive or have only been dead for a single day; they do not have the potential to taint the wine if they have been dead for more than three days. Lady beetles can appear quite suddenly, and some species can be plentiful, so careful monitoring of their populations is increasingly important as harvest approaches.

It is true that some insects can be friend and foe, depending on the time of the growing season. Lady beetles are one of nature’s greatest assistants in the battle against agricultural pests, with some species actually being introduced purposely to offset the use of pesticides. There are vineyards around the world that do this, sometimes placing the lady beetles on the vines by hand. It can be labour intensive, but their appetites can make them a valued addition to vineyards. That is, if it is at the right time.

This blog section will be ongoing throughout the duration of the project with bi-weekly updates provided by Liette Vasseur, Heather VanVolkenburg, Kasia Zgurzynski, Habib Ben Kalifa, and Diana Tosato (see research team). We will be providing research activity updates as well as informative pieces that delve into agricultural concepts and important global issues as they relate to agricultural sustainability and climate change. Stay tuned for regular updates!