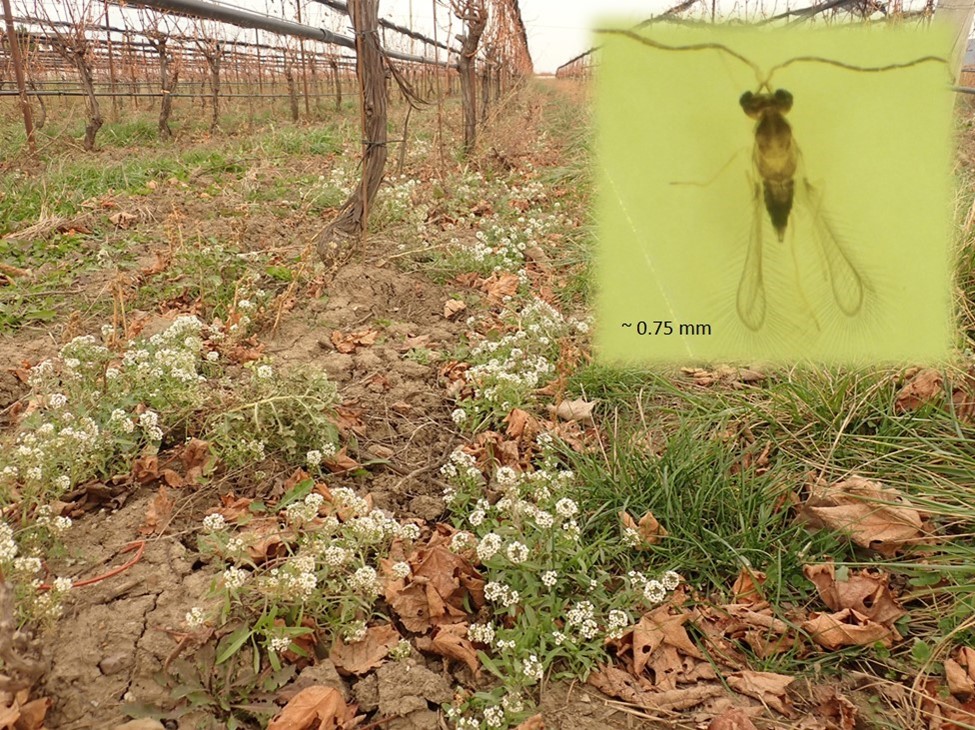 Fairyfly (more formally from the wasp family Mymaridae, as seen in the photo inset) is a name given to some species of tiny wasps (mostly 0.5-1.0mm) that are thought to be important parasitoids of vineyard pests. They may also be attracted to cover crop plants such as sweet alyssum (Lobularia maritima), shown growing below the vines in a local vineyard in the photo above (photos by Kasia Zgurzynski and Heather VanVolkenburg).

When grape growers consider using cover crops in their vineyards, they likely look at plants that can grow well between rows of vines, such as clover or rye. These, and other common cover crops, provide farmers with benefits such as the reduction of soil erosion, improved nutrient cycling and weed inhibition. It is also possible to grow cover crops that are attractive to beneficial insects, which can be achieved by planting directly under the vines. In doing so, farmers may encourage the presence of beneficial organisms, such as parasitoids (i.e., parasitic wasps), to target pests that feed on grapes and vines.

Parasitoids are insects that lay eggs in the bodies of other insects, such as leafhoppers and moths. Although they vary in size, most parasitic wasps are smaller than one centimetre — some are even as tiny as a fraction of a millimetre. Mymaridae, the family of parasitic wasps also known as fairyflies, includes the smallest insects known to science. They are important to agriculture because members of this family parasitize pests, particularly leafhoppers. Another family of particular importance in viticulture includes wasps that parasitize the grape berry moth, which is a common grapevine pest. Parasitic wasps can also influence pest insect populations, but more research is still needed to fully assess their efficiency in that regard.

It is easy to take these wasps for granted. They occur naturally throughout the landscape, but due to their small size, we are more likely to see the parasitized pests than the wasps themselves. Some grape growers choose to buy adult wasps and release them into their fields. The introduction of beneficial insects in this way is referred to as classical biological control and can be an important part of an effective and sustainable integrated pest management program. Conservation biological control, on the other hand, involves creating the right conditions in the landscape to attract naturally occurring beneficial insects, rather than manually releasing them in the area. Whether the population is natural or released, farmers can support and encourage the presence of beneficial insects by providing the adults with food sources such as nectar and pollen, i.e. flowers.

Here at Brock University, we are currently testing cover crops that could be planted in vine rows. One of these is sweet alyssum, a popular horticultural plant that provides a floral display and sustenance for beneficial insects. Since it is the flowers of alyssum that attract parasitoids, the plant mainly serves its purpose while in bloom. The flowers on sweet alyssum are wide and shallow enough that parasitic wasps can feed on them effectively with their small mouthparts. More research is also needed to uncover other types of insects that feed on alyssum, and whether it also attracts pests. It grows as a hardy annual in Ontario, so it usually needs to be seeded every year (although it has been shown to be able to reseed itself) and does not provide the ideal winter habitat that is important to many beneficial insects.

Alternatives to pesticides, based on conservation biological control, are expanding and gaining momentum. Research is needed to learn which plants can better attract beneficial insects (such as parasitic wasps) and to help farmers make more informed decisions about their approach to pest control. Farm management and climate change, especially extreme weather events such as flooding and droughts, may affect the performance of alyssum and other cover crops as well as populations of parasitic wasps. It is important to understand how these various factors may impact the performance of plants and parasitoids.

This blog will be ongoing throughout the duration of the project with monthly updates provided by Liette Vasseur, Heather VanVolkenburg, Kasia Zgurzynski, Habib Ben Kalifa, and Diana Tosato (see research team). We will be providing research activity updates as well as informative pieces that delve into agricultural concepts and important global issues as they relate to agricultural sustainability and climate change. Stay tuned for regular updates!