The Role of Perimeter Plantings in Vineyards 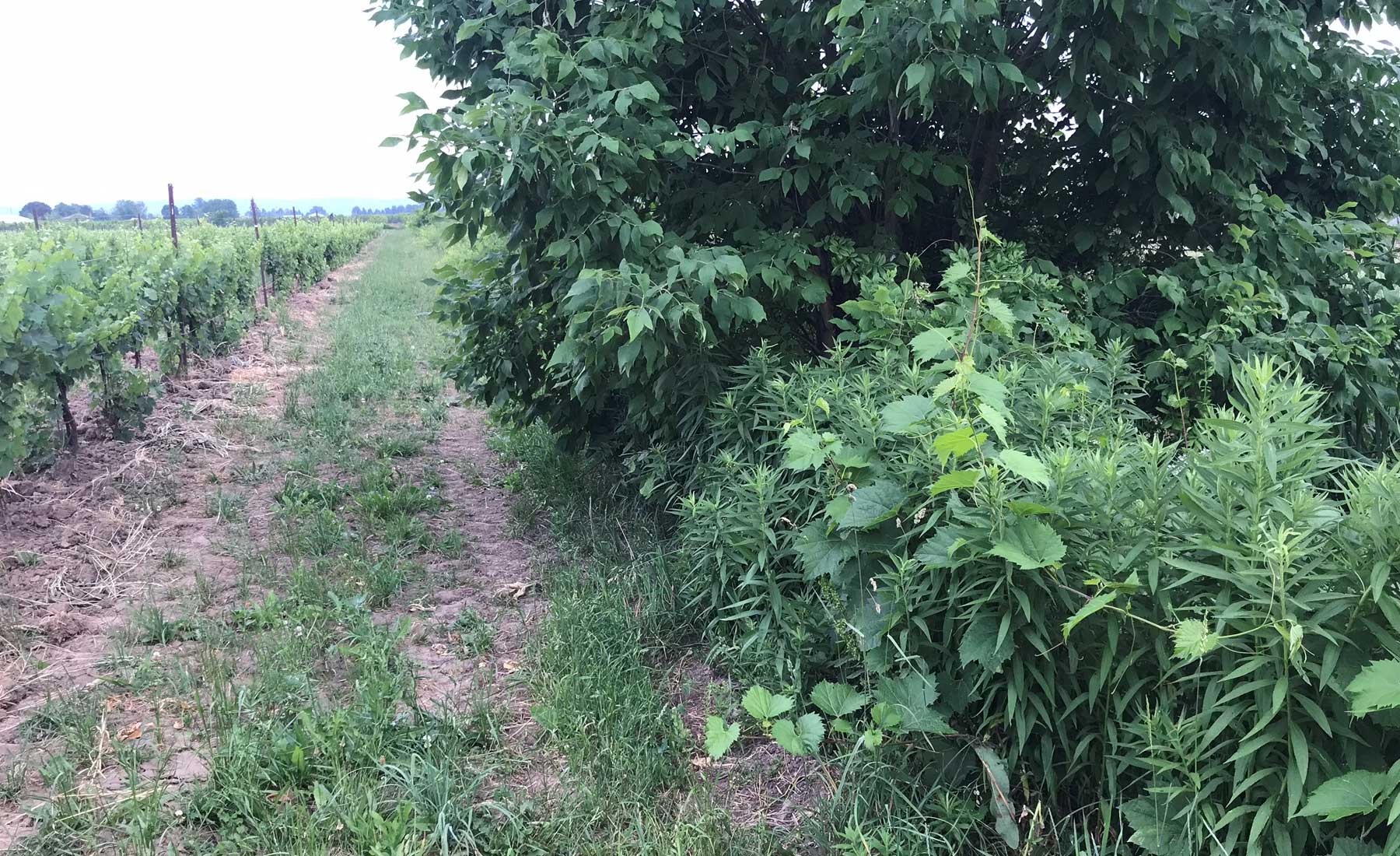 A perimeter planting (border vegetation at right of photo) at an organic vineyard in Niagara-on-the-Lake, Ontario (Photo: Kasia Zgurzynski).

Driving through Niagara’s wine country, you are likely to see many vineyards, often in close proximity to one another. What frequently separates these properties are fence-like rows of vegetation known as perimeter plantings (or hedgerows). The use of perimeter plantings in agricultural fields dates back to at least Medieval times in Ireland and England. Perimeter plantings can be remnants of previous forests, or, in many cases, farmers actively choose to plant and maintain vegetative borders with an understanding that these borders have the potential to be valuable elements of the agricultural landscape.

There are many obvious services that perimeter plantings provide for vineyards. They can provide a protective barrier between properties, for example, filtering airborne weed seeds from neighbouring farms or reducing drifting snow during winter storms (especially if there are conifers). The above-ground density of perimeter plantings can also reduce the potential damage that winds can have on grapevines, as well as reducing the amount of wind-caused erosion of exposed soil. Wind is also a major driver of moisture loss, and perimeter plantings can reduce this impact, as well.

Perimeter plantings offer other advantages as introduced species mingle with native and cultivated species to provide higher biodiversity than what would typically be found in a vineyard. Many species rely on these perimeters as a connection between habitats that would otherwise be isolated from each other, acting as a corridor for birds, insects, mammals, reptiles and amphibians. Sometimes farmers will also plant specific plant species in order to attract natural enemies of pest insects or pollinators. Perimeter plantings can provide food and overwintering habitat for parasitic wasps and predatory beetles, for example, both of which act as pest control. However, some insect pests can also use the perimeters to overwinter or to find alternative hosts. Wild grapevines may inadvertently be found in perimeter plantings and they may need to be removed as they can attract the Grape Berry Moth, a common pest in vineyards. Managing perimeter plantings can help maintain a functional mix of plant species that can potentially attract beneficial insects while simultaneously minimizing the attraction of pest species.

Although some potential drawbacks exist with having lush perimeter plantings, the services that they provide are valuable on many levels, to us as humans and the ecosystems we inhabit. As we continue to face increasing impacts from climate change, it is important to be equipped with the tools necessary to adjust and react accordingly. Grape growers are stewards of the land that they cultivate, and research on perimeter plantings can support them in their roles by providing practical solutions to complex challenges, including those caused by a changing climate.

This blog section will be ongoing throughout the duration of the project with bi-weekly updates provided by Liette Vasseur, Heather VanVolkenburg, Kasia Zgurzynski, Habib Ben Kalifa, and Diana Tosato (see research team). We will be providing research activity updates as well as informative pieces that delve into agricultural concepts and important global issues as they relate to agricultural sustainability and climate change. Stay tuned for regular updates!