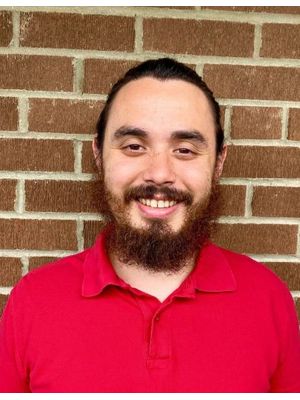 I have lived in Niagara for over 12 years now. In 2017, I graduated from McMaster with a Bachelor of Science in their Psychology, Neuroscience & Behavior (PNB) program. Following that, I began my masters here at Brock, where I worked with Dr. Curtis Fogel on looking at risk literature in football and rugby, in terms of the use of protective equipment and the risk compensation effect. I played both rugby and football when I was in high school. I know I was not as confident when it came to engaging in contact in rugby, but when I was playing football and had the equipment on, I felt more protected. So, I wanted to see if this was a shared phenomenon with others and see if there were consequences for this increased sense of safety (for example, engaging in riskier behaviour such as a bigger, more forceful hit).

In terms of esports, it was something that I’d been following since my first year at McMaster, mostly just watching it as a fan. It was only towards the end of my master’s and the start of my Ph.D. that I was thinking about where I wanted to go in terms of my research goals and objectives. Esports is still quite young, it’s in its infancy, and so I figured I might as well jump at this opportunity to learn more about the industry. I want to see if I can add to the literature and discourse around various topics in esports.

The esports webinar with the Centre for Sport Capacity was one of the big projects that we up a couple weeks ago, and I’m looking to do another webinar next semester in March or April around a specific topic within esports. For my doctoral thesis, I am looking at how esports teams and programs are structured and governed in Canadian colleges and universities, whether they’re run by students at the club level, merged into university athletic and recreation departments, or some other model. I hope to talk to relevant stakeholders who are involved in these esports programs to ask them about their programs and how they are structured and organized. Hopefully, the research can act as a blueprint for Canadian colleges and universities to integrate esports into their athletic, recreational, and/or academic programming.

Additionally, I’m working with my supervisor, Dr. Curtis Fogel, where we’re looking at gender-based virtual violence in live gaming and live streaming. We will be presenting some of our preliminary findings at the inaugural Esports Research Network Conference from December 9-10, which we’re both looking forward to as an opportunity to not only present our research, but also to see what research projects are currently being conducted in esports. I am also collaborating with Dr. Nathan Hall from the Kinesiology Department at Brock on a project looking at leisure time physical activity and its correlation to video games. It’s a lot of projects on the go, but it keeps me busy and allows me to jump between projects whenever I hit a mental wall.

– What clubs/organizations are you involved with?

Well, the first, would be the Centre for Sport Capacity (CSC) and where we worked together to put on the esports webinar. The other major group I’m a part of it is the Esports Research Network (ERN). They are having their inaugural conference in December, which I’m going to help present at with Dr. Fogel. There are currently just over 200 members from across the world, I’m one of the few Canadians that is a part of it. It is a growing group of scholars and I am thrilled to be a part of this network.

– What is your favorite TV show right now?

I just finished Arcane on Netflix, which was produced by Riot Games who developed popular games like League of Legends, Teamfight Tactics, and Valorant. I thought they did a great job introducing characters and environments from the lore, and will hopefully get people interested in trying out their games. The next show that I want to watch is Loki on Disney Plus, just haven’t gotten around to that yet. I’m also excited for the second season of The Witcher to come out in December.

– What are your current hobbies?

If it wasn’t obvious already, I enjoy playing video games. I tend to jump between games, but I’ve been playing a lot of Halo: Infinite and I’m looking forward to playing more during the holiday season. I also like to cook a lot. I’m starting to make more vegetarian meals because my girlfriend is vegetarian, so I’ve been experimenting with dishes that contain things like tofu, beyond meats, lentils, and anything else I can get my hands on. I also like going to the gym, even if it doesn’t look like it! Being able to workout in a gym again after being put on hold during the pandemic has been something I look forward to each week and adds some stability to my life.

It’s kind of hard to think about the future to be honest with you because I’ve got so much going on, which is kind of a good thing! I have multiple projects that I have an interest in learning more about and it’s allowing me to stay in the present and diversify my workload. So, I haven’t thought all too much about where specifically I want to go in the future.

I’m just kind of working on the research and these projects, trusting in myself and the people I’m working with. Then see where the dominoes fall from there, whether I stay in academics or work elsewhere in the esports industry. I’m leaving myself open to everything. I don’t want to channel myself directly into one avenue right now. Attending conferences, doing multiple projects, and continuing my professional development will allow me to keep my options open and allow me to explore multiple career pathways.