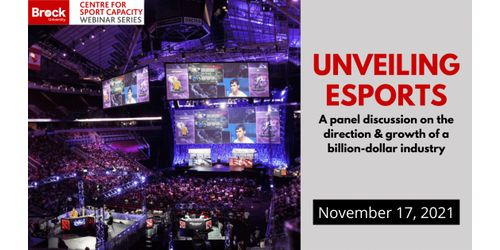 We sat down (virtually) with Ph.D. student Cullum Brownbridge to chat about the Esports Webinar, “Unveiling Esports: A panel discussion on the direction and growth of a billion-dollar industry” that will be held on November 17th. Cullum will be moderating this exciting webinar and asking questions from the audience to facilitate a great conversation.

In our interview, we had a chance to speak with Cullum about his connection to Esports as well as what participants will gain from attending the webinar.

What is your connection to Esports & what excites you about it?

Outside of having Esports as my Ph.D. main topic and a couple of other research topics within Esports, it’s mostly as a fan. I think is most students and faculty in the sports management department research sports management because they enjoy the sports themselves. When I was in my first year of undergrad at McMaster University, back in 2012, I began watching live Esports events, namely the League of Legends World Championships. There was a huge crowd and I remember there was a fan using a vuvuzela, which was popular during the 2010 FIFA World Cup. So, it was very bizarre to me at first. Since then, I’ve seen just how much the scene has grown and how more people are a part of it. In the beginning, older people might have thought “oh, you know you’re watching somebody else play video games it seems like a waste of time”, but now they see the value in it too.

It excites me in the sense that it’s a growing industry. It’s another space for people to connect, to share, to play and to work together. It is exciting to see that people are seeing video games as a way to make connections with other people through teamwork and clubs. It’s a relatively new field and jumping into it now allows me to put my foot in the door and shape the way that literature unfolds itself around it over the next few years.

Why should people attend this webinar?

For students specifically, it’s a great opportunity to get a behind the scenes look at the industry. I find that a lot of people I talk to have played video games but aren’t familiar with the competitive video gaming scene. I think people are curious as first of all, how did Esports get so popular? Why is it so popular? Is it going to be a main competitor to traditional sports or other forms of entertainment?

There is an opportunity for those who might be interested in pursuing a career in sport management. Anything they would take away and apply for the sport management field can be applied to Esports. This industry is going to continue to grow, and if students can get their foot into the door now it might benefit them a lot in the future. Especially if Esports continues to grow, and I don’t see any reason why it would stop growing.

What will the webinar look like to the average participant?

There are three experts who work closely with teams in Esports-based organizations who can give their expertise and can share their life experiences. That will connect to the average viewer so if they’re thinking about pursuing a career in Esports or even elsewhere, they will take away lessons that will be a great benefit.

If you are interested in attending this exciting webinar please register here!