FROM THE BROCK NEWS | by Amanda Bishop 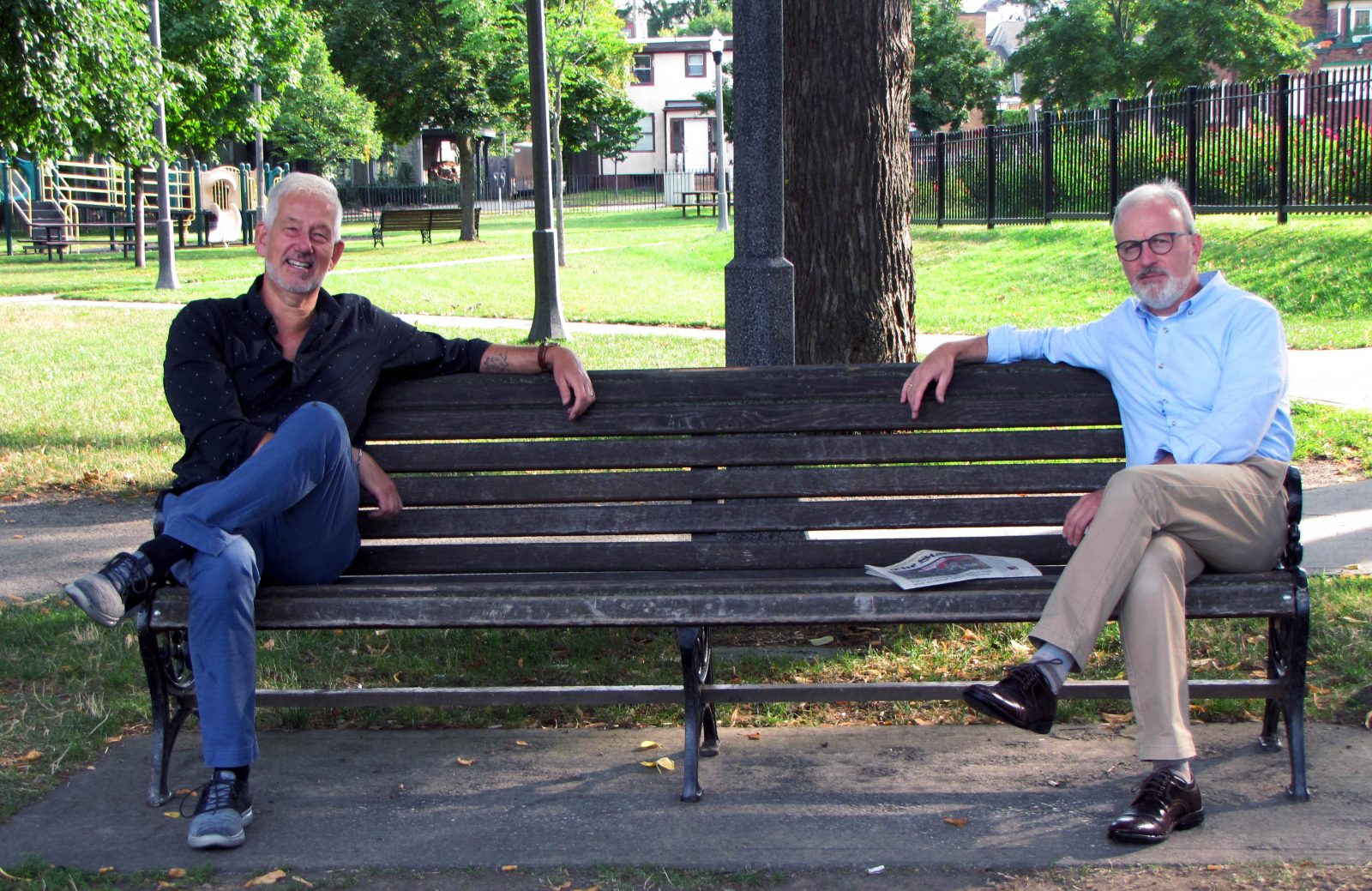 Michael Ripmeester (left), of Brock’s Department of Geography and Tourism Studies, and Russell Johnston (right), of the Department of Communication, Popular Culture and Film, were among the participants in a recent authors’ workshop, which was also co-hosted by Ripmeester.

In the wake of the murder of George Floyd in the spring of 2020, a global movement led to the toppling of hundreds of monuments commemorating historical figures and events.

The trend fascinated Professor Michael Ripmeester in Brock’s Department of Geography and Tourism Studies, who, along with Associate Professor Russell Johnston in the Department of Communication, Popular Culture and Film, has been studying memory and the ways in which people engage with the landscape since about 2003. Ripmeester says that while the act of removing or destroying monuments to affect public memory is nothing new, the wave of reckoning with landscapes that spread around the world last year was different.

“People have been toppling monuments since ancient times, often related to regime changes — so, for example, statues of the former leader get destroyed and replaced with statues of the new leader,” says Ripmeester. “But over the last year, there has been a global recognition of the legacies of colonialism and racism, and that has sparked a massive reconsideration of monuments all over the globe.”

To delve deeper into the movement, Ripmeester teamed up with colleague Matthew Rofe of the University of South Australia to collect essays that critically engaged with how landscapes are contested by individuals, groups and institutions for a future special issue of the journal Landscape Research.

But when response to their call for papers quickly outsized the available space in the journal, Ripmeester and Rofe decided to explore the possibility of a book project.

To that end, they hosted a virtual authors’ workshop in late July entitled “Global Iconoclasm: Contesting “Official” Mnemonic Landscapes.” Using funding from the Council for Research in the Social Sciences (CRISS) and Brock’s Social Justice Research Institute (SJRI) to support participants, they invited 10 authors to share their contributions and provide constructive feedback on each other’s essays.

Some of the landscapes discussed during the workshop included monuments to fascism that remain standing in Italy, the contrast between monuments to British history and local usage of the heritage site at Victoria Falls in Africa and the Tsunami Museum in Banda Aceh, Indonesia, which doubles as an emergency shelter for future disasters while memorializing the 2004 tsunami that killed more than 200,000 people.

“Something that came out in a number of papers is how we need to ensure that we don’t go back to what we did before,” says Ripmeester. “Moreover, the papers explore how we can help people understand structural and systemic racism in ways that both acknowledge the harm done and allow people to move forward with a sense of seeking justice for people who have been marginalized by collective memory.”

He explains that monuments and other historic sites are places where memory is stored, just as memory is stored in archives, museums and school curricula. Their authoritative weight as well as the intertextuality of the narratives they represent tell a common story about identity — but historically, they are rarely inclusive.

“Those with time and political, cultural, social and economic power determine what monuments are created, so when you look at a monument or you look at a historic site, you’re looking at a very specific manifestation of power,” he says. “Some groups have been completely left out of contributing to public identity, but we’re starting to see that change. For example, in Vancouver, Jim Deva Plaza was built and named in honour of one of the pioneers of LGBTQ rights in the city.”

In addition to co-hosting the workshop, Ripmeester also presented a paper co-written with Johnston about the contested memorial to Pte. Alexander Watson at St. Catharines city hall.

Ripmeester and Rofe were also recently awarded funding to support their research into a virtue-based approach to landscape management and their efforts to, as Ripmeester describes it, “build a network of scholars, artists and practitioners who have interests in thinking about collective memory, reconciliation and healing” — a theme that emerged in many of the workshop’s papers.

He points to one author from Australia who wrote about a prison site where Indigenous men and boys had died and been buried in unmarked graves far from their home territories, violating their ancestral burial practices of being interred in one’s own country and a familiar landscape.

“In trying to address this tragedy, the architects charged with designing the commemoration worked with Indigenous spokespersons and the communities of all the deceased to be respectful of not only local culture but also the cultures of the peoples to whom these men belonged,” Ripmeester says. “In the end, they built a site that includes a memorial garden that reflects the country. It’s a beautiful example of how Indigenous people and governments can work together to create a site that can lead to reconciliation through recognition of harm done and also toward overall healing.”