REPOSTED FROM THE ST. CATHARINES STANDARD
February 07, 2019 | By: Allan Benner 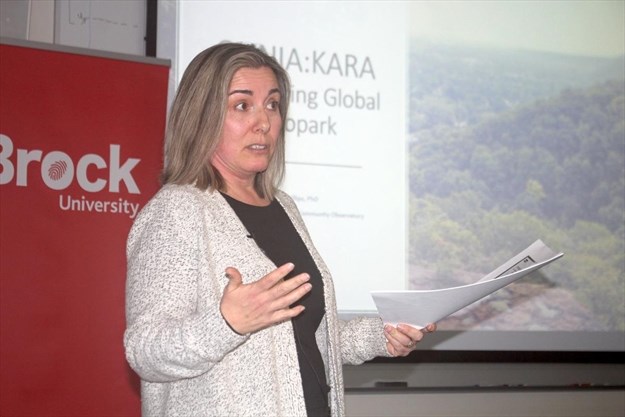 Niagara’s tourism potential should not be limited to Niagara Falls.

And an initiative launched about five years ago by Geospatial Niagara should help the region boost its potential for drawing visitors to some of the more remote attractions the peninsula has to offer.

Niagara Community Observatory research co-ordinator Carol Phillips presented a new policy brief Thursday morning that focuses on the potential that developing a UNESCO Global Geopark could hold for Niagara — such as bringing more tourists to the area and giving them reasons to stay longer.

Phillips said a proposed geopark, to be called Ohnia:kara, would encompass the entire Niagara Region and highlight at least 78 attractions in all 12 local municipalities — “from Beamer Falls in Grimsby to Niagara Falls, from the Wainfleet Bog and Welland Canal, all the way on down.”

She described it as an “international geo-tourism brand” that can be used by communities to promote natural and heritage resources while focusing on sustainable economic development and fostering conservation and education.

For a tourism-focused region such as Niagara, she said being designated a UNESCO Global Geopark “is a way to advertise to potential visitors that this is a geography that you need to see and experience, and that includes everything from its geology through to its cultural history and its economic character.”

She said there were 12.9 million person visits to Niagara in 2017, of which 8.4 million were visitors from elsewhere in the province, and those visitors spent $2.36 billion during their stays.

“But less than half of those visitors stayed overnight, and of those who did the bulk of them only stay one night, maybe two,” Phillips said.

A geopark designation, she added, will help promote Niagara “as more than just the day trip.”

Phillips stressed that there is no regulatory limitations associated with the UNESCO designation that would further limit land use planning in the region.

The initiative was first proposed about five years ago by Geospatial Niagara founder Darren Platakis, who first learned about a geopark in southern New Brunswick called Stonehammer.

“When I stumbled upon the Stonehammer geopark site, all I saw was potential and opportunity,” Platakis said.

He said the initiative is “all about creating those opportunities and living up to the potential that Niagara has, globally — beyond Niagara Falls and Niagara-on-the-Lake.”

“We have such a wealth of sites to see, opportunities,” he added.

Platakis said the initiative holds a great deal of educational potential, too.

Although a mandate of Geospatial Niagara is promoting geo-literacy, he said many Grade 12 students can’t identify all the municipalities within Niagara Region.

The global geopark initiative is “a way to attract students to Niagara to do research, to keep students here, for students that are from Niagara that go away to university it’s a stronger pull factor for them to come back to their communities if they become involved,” he said.

“We have lofty goals and realistic expenses,” he said, responding to a question from an audience of about 40 people.

“We will be coming to the point very soon where we will be actually coming out and saying, here’s our ask. This is what we would like in terms of financial support, idea support, in-kind support.”

Lucas said the organization will continue meeting with municipal councils to discuss plans and potential.

Phillips said much of the preliminary work has been completed by Geospatial Niagara.

For instance, she said a formal expression of interest has been submitted to the Canadian National Committee for Geoparks, allowing Ohnia:kara to officially be identified as an aspiring geopark.

Platakis struggled with emotion while reflecting on the progress that had been made towards making a project he started five years ago a reality.

“If you would have said to me last year at this time we’d be here today doing this, I probably wouldn’t have believed it.”

But thanks to the work of Geospatial Niagara members, Niagara Community Observatory and community support, Platakis said efforts to establish the geopark have reached “the end of one chapter and the beginning of another one.”