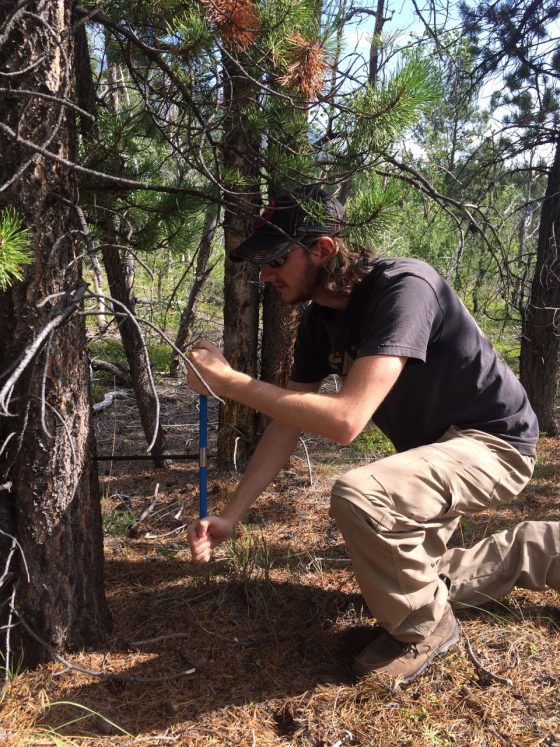 New research by Tyler Prince (Brock Geography and Master of Sustainability alumnus), Michael Pisaric, and Kevin Turner was published this week in Frontiers in Ecology and Evolution. Read more below.

Previous research suggests climate warming during the current century is likely to lead to an increase in the frequency and severity of wildfire. Recent wildfire seasons in northern Canada generally support these studies, with some of the worst fire seasons on record occurring during the past decade. While we can readily track the spatial and temporal distribution of these events during recent decades using satellite-derived data, historical records of past fire activity are relatively short. Proxy records of past fire activity are needed to fully understand how fire regimes may be shifting in response to changing climatic conditions. A high-resolution fire record, dating back to the early-Holocene, has been reconstructed using a 512-cm sediment core collected from a small lake in southwest Yukon Territory, Canada. Macroscopic charcoal was counted throughout the core at contiguous 0.5-cm intervals. The core was also analyzed for loss-on-ignition and magnetic susceptibility. Fossil pollen preserved in the lake sediment was analyzed to determine vegetation change throughout the Holocene. Macroscopic charcoal analysis indicates an active fire history throughout the record, with 90 fires occurring throughout the Holocene. CharAnalysis indicates an average signal to noise index of 6.2, suggesting the peaks are significant and detectable from the slowly varying background level. Results suggest the fire regime in this region responds to both top-down (climate) and bottom-up (vegetation) factors. Fire return intervals changed in response to shifts in precipitation and temperature as well as the expansion of lodgepole pine into the region. The shifts in precipitation and temperature were attributed to the oscillation of the Aleutian Low pressure system and fluctuations in climate associated with the Medieval Climate Anomaly and the Little Ice Age.