Dr. Phillip Mackintosh’s research on the history of Toronto streets highlighted in the Toronto Star

Toronto’s been road-raging about cars, bikes and streetcars for over 100 years. We’re not about to stop

In the long history of Toronto streets, change has never come easily.

Downtown, where the streets are narrow relics of a Victorian age, there is little middle ground, only middle fingers.

The flipped bird on King St.’s restaurant row is the latest symbol of irritation, a stand-in for the frustration certain business owners feel toward city hall, and a transit pilot they say isn’t working for them.

Toronto was a city of walkers when it was incorporated in 1834, and that remained the main form of transportation (supported by transit) until the growth of its suburbs after the Second World War, says Phillip Gordon Mackintosh. The geography professor at Brock University researched Toronto’s streets for his book Newspaper City: Toronto’s Street Surfaces and the Liberal Press, 1860-1935. Torontonians paid for concrete sidewalks long before they agreed to finance asphalt roads, because most people simply didn’t use them, he notes. 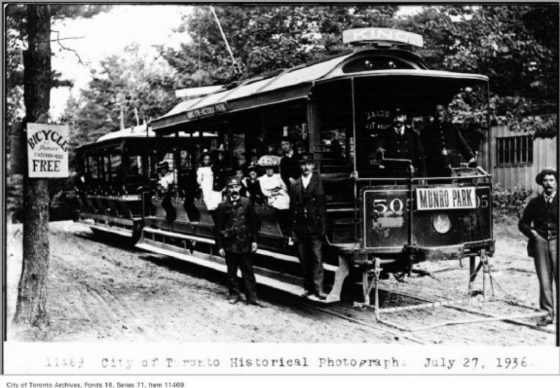 This 1900 photo shows one of the Toronto Railway Co.’s electric streetcars. The company began modernizing its fleet in 1892, and by 1894, horse cars were no longer in use. (ALFRED J. PEARSON / TORONTO ARCHIVES)

Toronto has greeted change on its streets with excitement, anxiety, finger pointing, politicking, gloomy predictions and ideological bickering for most of its history. Even in the 1860s, when Toronto had close to 45,000 citizens and the roads were covered with filth and roaming animals, we argued about the “itinerant Toronto hog.”

“Have we no ‘health inspector?’ What are our ‘police’ doing?” one citizen wrote to the Globe in 1862, complaining about the pig nuisance. Another defended the pigs, because they were performing a valuable trash-disposal service. When a tenacious gutter pig bit the skirt of a woman walking on King St., the Globe demanded that the pig nuisance be an election issue… continue reading.