Hosted by the Department of Communication, Popular Culture and Film, the Grant Dobson Case Competition provides students the opportunity to showcase their superior creativity and presentation skills to a panel of industry experts.

The Case Competition was created by Sharon Broderick, Goodman School of Business, in 2005 and named in 2008 for the late Grant Dobson, who served as the executive director of the Office of External Relations at Brock University.

The establishment of this prestigious event works to further the objectives set by Terry O’Malley as a platform within the Lecture in Marketing and Advertising to deliver opportunities for students to learn about and implement the current strategies and roles of advertising, marketing, and the media.

Winners of this competition are recognized by fellow students and industry professionals as possessing superior creativity, and demonstrating excellent presentation skills.

Teams are to prepare a proposal as their entry to the competition and three finalist teams will be selected to pitch their marketing and advertising ideas to our panel of industry experts.

If you have questions about the case competition, please email dobson@brocku.ca.

Registration for Dobson 2022 opens October 3rd, 2022. Please review the 2022 contest brief, and contest information below, before registering your team.

The Dobson Case Competition (the “Competition”) is run by the Brock University Department of Communication, Popular Culture and Film and is governed by the following rules.

The Competition is open only to teams that:

By participating in this Competition, all team members agree:

The 2021 competition challenged participants to develop gamified marketing tactics and to drive sales for personalized candies amongst Gen Z consumers. The event was document by The Brock News. 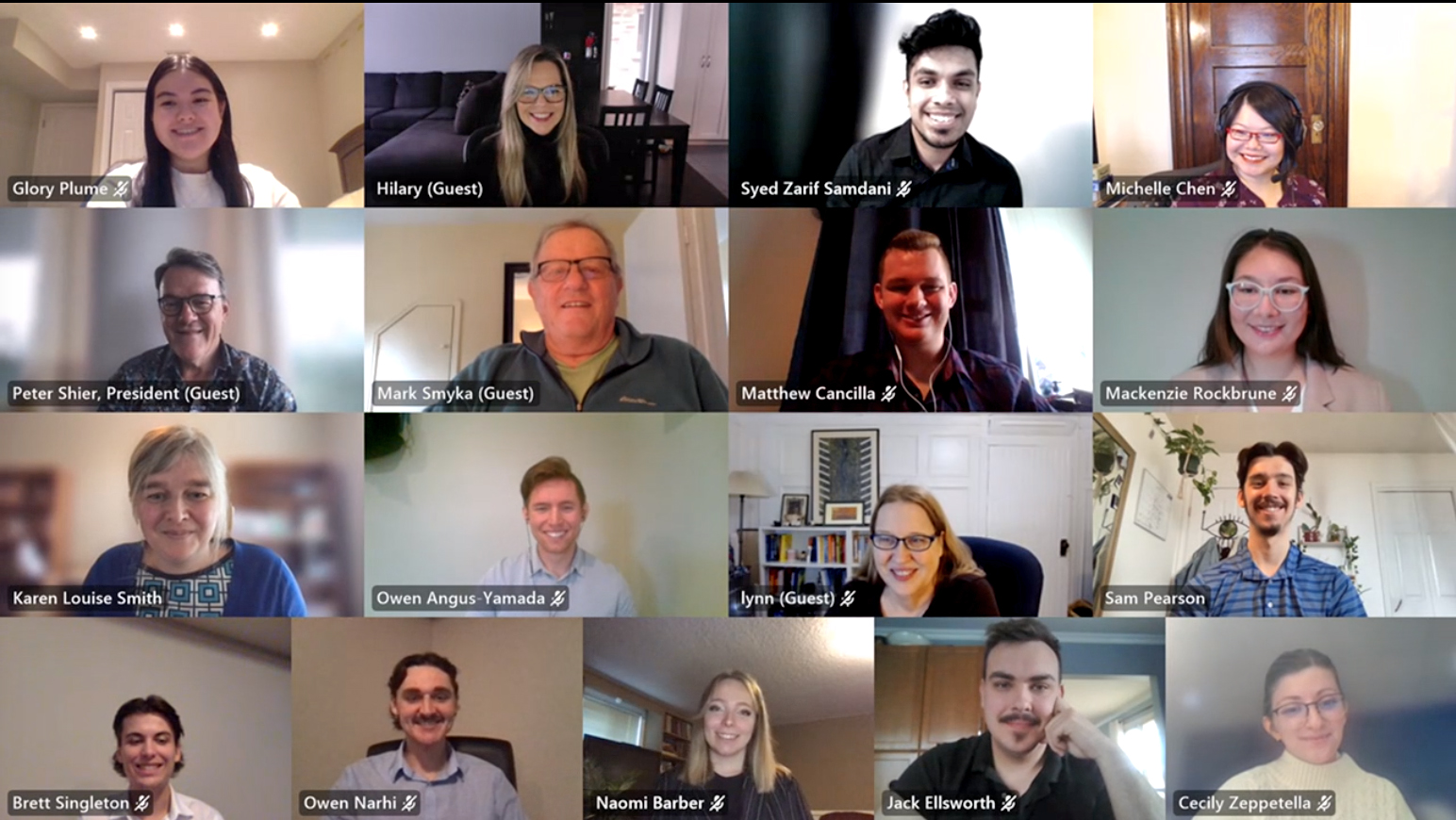 The case competition was held virtually in 2020. Teams were invited to review a case study on digital marketing targeting Generation Z and develop a creative campaign focused on increasing brand engagement on the social media platform TikTok.

Read more about the 2020 competition here. 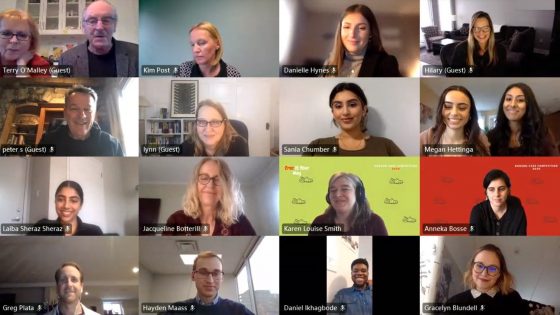 First Place: Croc Around the Clock

Second Place: Croc It Your Way

Teams were tasked with developing a creative idea and strategy to encourage 18-24 year-old Canadians to organize shoreline clean-ups. The goal was to inspire young adults to act.

Read more about the 2019 competition here 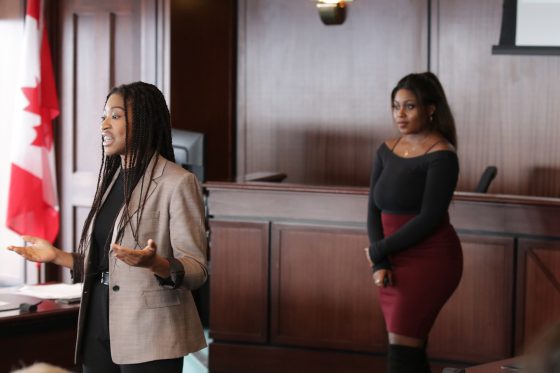 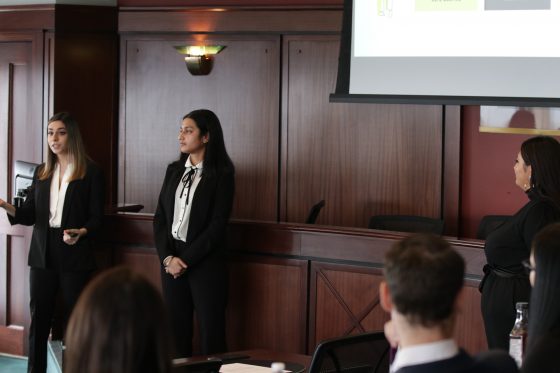 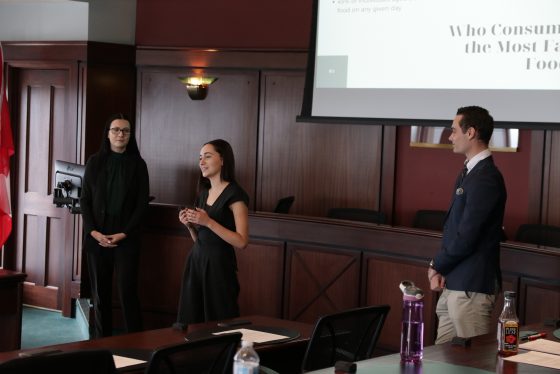 Third Place: Clean Up to Fill Up

Read more about the 2018 competition here 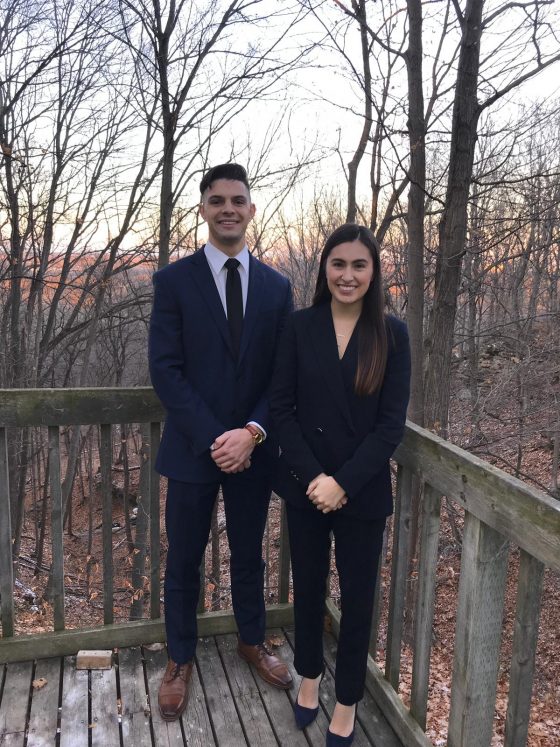 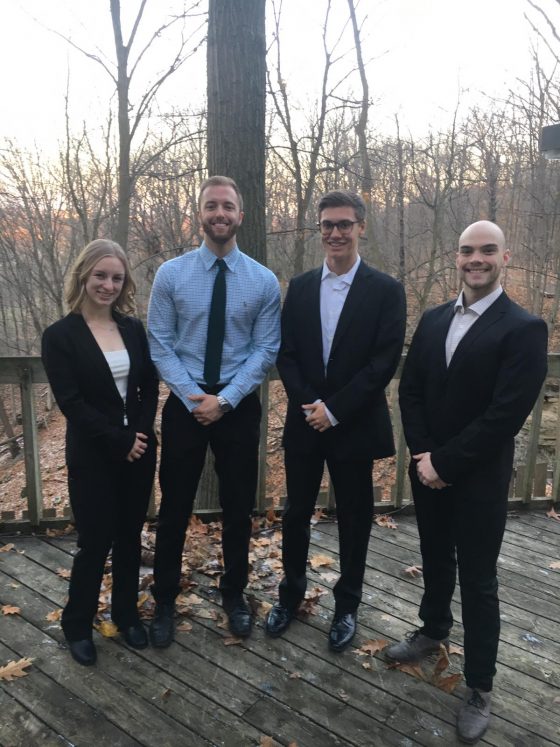 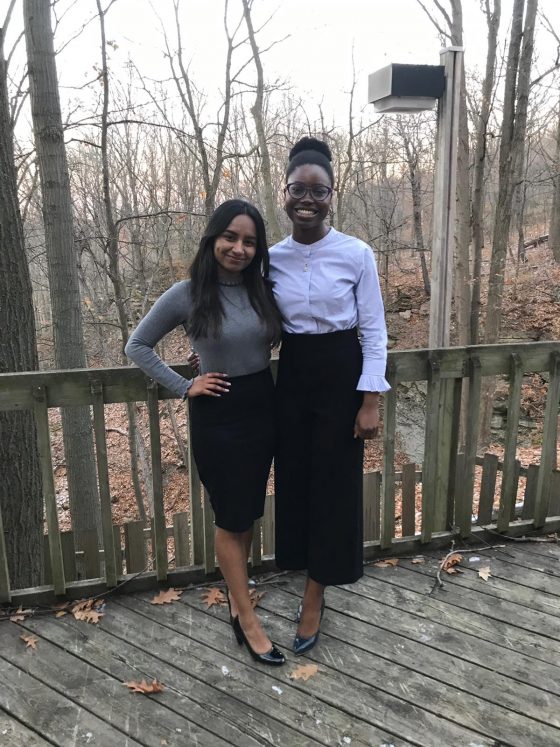 Created by St. Catharines native and advertising icon Terry O’Malley, the lecture honours O’Malley’s legacy as one of the most legendary creative talents in modern Canadian advertising. For the past 20 years, the lecture series has exposed Brock students to some of North America’s top marketing and business communicators.

Looking back, to see the future
What the biggest marketing, media and advertising stories of 2020 can tell us about 2021 and beyond.

As editors of The Message, Chris Powell and David Brown spend every working hour (and many non-working hours) tracking and reporting on the most newsworthy marketing, media and advertising stories from Canada and around the world.

In this fast-paced presentation, they will review some of the key stories from the past year, which they think are important signals for where the industry is going.

David Brown joined Marketing magazine in 2005. As news editor, he had a front row seat for the digital transformation of the industry—there for the first Marketing stories about Facebook, Twitter and YouTube. He was eventually promoted to executive editor, responsible for all day-to-day editorial output for the magazine. David left Marketing in late 2014 to explore the fast-growing world of content marketing, while remaining a regular columnist and contributor until its closure in late 2016. He co-founded The Message in 2018.

Chris Powell has been covering Canadian media, marketing and advertising since first joining Marketing magazine in 2001. He witnessed digital’s transformative effect on the legacy advertising industry first-hand, and has spent the past two decades covering the “new” ad world. His work has also appeared in Maclean’s, Canadian Business and The Globe and Mail. He co-founded The Message in 2018.

Built From Scratch
An Entrepreneur’s Journey
Advertising Executive Dave Lafond is the 2019 O’Malley Lecture in Advertising and Marketing speaker. Hear his remarkable career journey from account executive to agency president to the highly successful launch of his own agency, No Fixed Address. Lafond will provide a rare and intimate look into the thrills and the agonies of launching your own business and starting an ad agency from scratch.

Dave Lafond is President and Co-Founder of No Fixed Address.
Dave spent his formative years building, launching and transforming some of the top agencies in Canada. He joined Publicis in early 2000, where he spent 11 years rising through the ranks, including launching Publicis Modem in 2007, a digital agency that grew to a team of over 120 experts. In early 2011, as President of Proximity/BBDO Canada, Dave honed his hybrid skills and built bridges between digital, traditional, and CRM. In late 2013, he joined Cossette, one of Canada’s largest independent agencies, as President of English Canada, with the mandate to transform its creative and digital acumen. 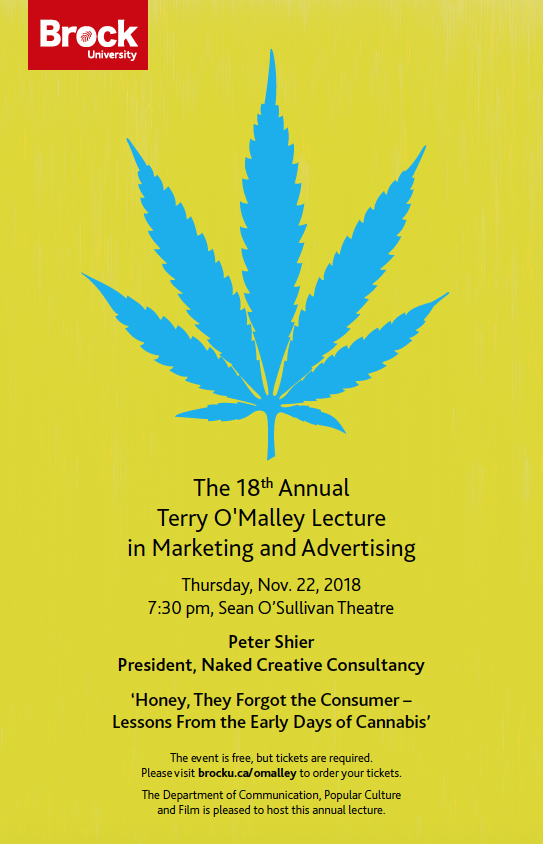 Held on Thursday, November 22 at 7:30 p.m. in the Sean O’Sullivan Theatre at Brock University.

Read about the winners here 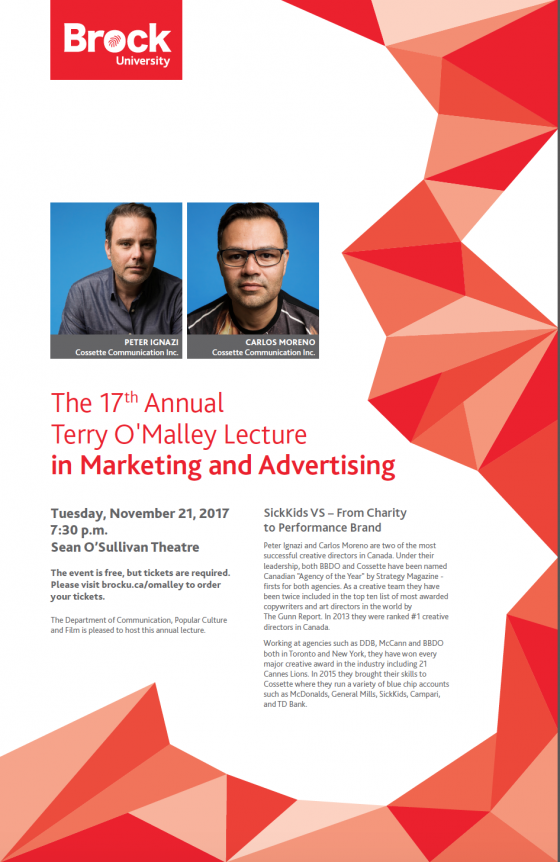 The 2017 Terry O’Malley Lecture in Marketing and Advertising was held on Tuesday, Nov. 21, 2017 at 7:30 p.m. in the Sean O’Sullivan Theatre at Brock University.

This year’s lecturers are Peter Ignazi and Carlos Moreno from Cosette Communication Inc.

Peter is one of the most successful creative directors and copywriters in Canada. Under his leadership, both BBDO and Cossette have been named Canadian “Agency of the Year” by Strategy Magazine – firsts for both Agencies. He has twice been included in the top ten list of most awarded copywriters in the world by the Gunn Report. In 2013, he was ranked #1 Creative Director in Canada by Strategy Magazine. In the past decade, he has won 21 Cannes Lions for 10 different clients in 8 categories ranging from film to cyber to integrated.

A native of Hamilton, Ontario Peter earned a B.Sc. in Chemistry from McMaster University before enjoying a successful career as a Research Chemist with Dow Chemical in Germany. He also has an MBA from McGill University. Peter has worked as a Copywriter and Creative Director in Toronto and New York for such agencies as TAXI, McCann and Downtown Partners DDB. In 2015, Peter brought his skills to Cossette where he runs a variety of blue chip accounts, including McDonalds, General Mills and SickKids.

Carlos Moreno is one of the most successful creative directors in Canada. In his tenure as ECD of BBDP, it was named Canadian Agency of the Year by both Strategy Magazine and the Advertising and Design Club of Canada. He was responsible in making the Toronto office a top 4 agency in the BBDO global network. in 2013, he was ranked #1 Creative Director in the country by Strategy Magazine. From 2004 to 2006, Carlos was Creative Directors and Partners at Amalgamated in New York working on Ben & Jerry’s and Cablevision. He has been twice included in the top ten list of most awarded art directors in the world by Broads Magazine and The Gunn Report.

In 2006, he brought his skills to BBDO where he runs a variety of blue chip accounts, including FedEX, PepsiCo, RBC, Wrigley and Mars. Carlos is a native of Guatemala. In 2011, he was nominated as one of the most Influential Hispanics in Canada by the Hispanic Chamber of Commerce. As of 2015, Carlos has brought his talent to Cossette run McDonalds, General Mills, Intact, Sick Kids and Telus.

Overview: According to Jackie Botterill, Associate Professor in the Department of Communication, Popular Culture and Film (CPCF), the Grant Dobson Case Competition is the culmination of years of learning, writing and thinking demanded of students in Brock University’s business and communication degree programs.

“Students focus their creativity, discipline their ideas, exercise strategic thinking, apply research, media and marketing skills and communicate persuasively with the goal of encouraging action in the marketplace.”

And the opportunity to encourage action in the marketplace is very real. The annual event, presented in conjunction with the Terry O’Malley Lecture in Marketing and Advertising, has a long history of creating valuable industry relationships for students.

In this year’s competition, teams were challenged to develop a marketing campaign for the luxury brand Canada Goose.

Ten teams submitted written proposals. Faculty members from CPCF and the Goodman School of Business reviewed the submissions and selected the top three finalist teams. Finalists pitched their campaigns to an esteemed panel of judges including: