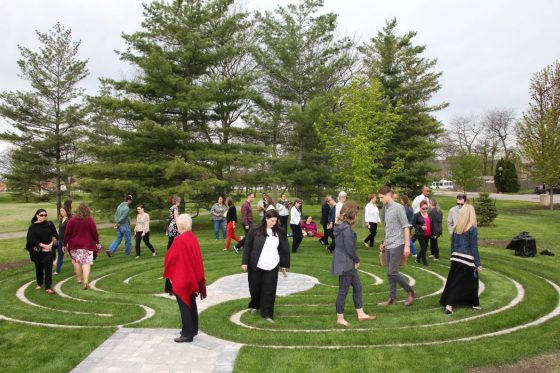 “The labyrinth offers a place of deep reflection, of calm and contemplation; a wellspring for creativity; a place to connect with our deepest selves. This is the heart of Higher Education: this is what teaching and learning is about” (Sellers, p. 2).

A labyrinth provides an opportunity for walking a path, uninterrupted by obstacles, as a way of centering oneself to de-stress, to connect, and ultimately to reflect on one’s journey. Labyrinths have existed for many centuries and have appeared in many countries and cultures. Unlike a maze, whose purpose is to get you lost, a labyrinth has a unicursal path with only one way into the center, returning the same way.

The Brock University Labyrinth is a seven circuit classical labyrinth that was created by the teaching centre in partnership with units across campus as part of our focus on fostering Contemplative Practices in teaching and learning.

Brock acknowledges that it is on the traditional lands of the Haudenosaunee and Anishinabe peoples and traditional shared hunting and gathering grounds of many nations. We are grateful for the opportunity to build a labyrinth that can be inclusive of many cultures and ways of being.

The Brock University labyrinth is a collaborative partnership between faculty, staff, students and administrative departments who are committed to creating a space on campus for reflection and contemplation. Its versatility means it can be utilized within mental health and wellness initiatives, experiential learning, classroom teaching and learning, and staff and faculty professional and personal development. Various partners and units on campus can engage with the labyrinth – and the curriculum that is developed – to facilitate walks by small groups to connect course content to personal experience through reflective prompts; in faculty and grad student workshops on contemplative practices and embodied learning; in student sessions for mental health and mindfulness activities; and in staff development initiatives focused on workplace stress and work life balance. Members of the community can access the labyrinth to walk mindfully and/or in meditation.

There is no one way to walk the labyrinth, but here are a few suggestions: 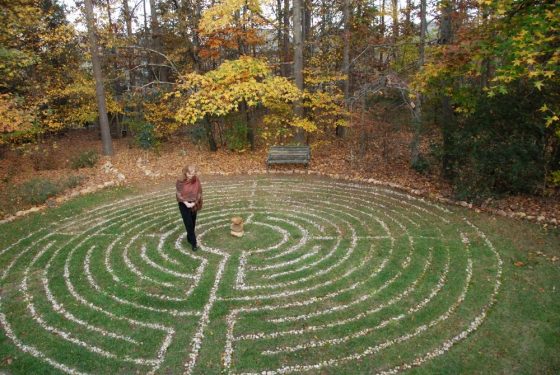 The Brock installation is a 7 circuit classical labyrinth, also known as a Cretan labyrinth.  Classical labyrinths are approximately 4000 years old and the design has been discovered on ancient Greek coins in Crete, on petroglyphs, and across many international regions such as Spain and India. Another common labyrinth design is the Medieval labyrinth which is often found in churches, the most famous being the installation in Chartres Cathedral in France dating from the 13th century (Buchanan, 2007). The Medieval labyrinth is 11 circuits and includes many turns embedded within four quadrants. It commonly contains a rose shape in the centre.

According to Sellers and Moss (2016) “ the labyrinth is an international image: appearing in many faiths, cultures and communities, it does not belong to any single tradition and can be walked by people of all faiths and none.” 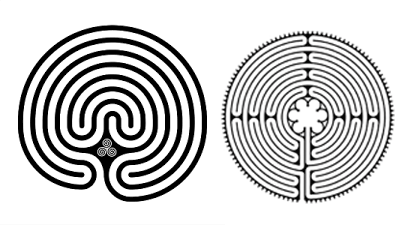 It is often easy to confuse the use of these two words. In popular culture the word labyrinth is often used to denote a maze rather than the unicursal path designed for mindful walking. Whereas the purpose of a maze is to get you lost, the purpose of a labyrinth is to allow you to find yourself. Instead of obstacles and dead ends, which leave you confused and potentially agitated, a labyrinth allows you to focus on simply following the path as you reflect on life’s journey. There is only one path to the centre and you return the way you came in. On a labyrinth path you cannot get lost.

Another important distinction is that a maze often includes an element of competition with the end goal of finding your way out. It is a puzzle to be solved, an amusement or game. The labyrinth is not competitive: the focus is on the journey, not the outcome.

Read an overview of the origins of the labyrinth by Professor Adam Rappold from the Brock University Department of Classics.

Research suggests there are many benefits to engaging with the labyrinth, notably that of stress reduction, and feelings of calmness and peacefulness (Rhodes, 2016). Walking mindfully without obstacles allows us to reflect on our academic or personal journey (Sellers & Moss, 2016) and potentially leads to greater insights. Psychologically, labyrinth walking can assist people with processing grief (Wasko-Flood, 2012), reducing anxiety, agitation and stress (Rhodes, 2008), and promoting creativity and intuition (Michels, Maxwell, & Chang, 2008). Having a reflective space for such activity is important to mental and emotional wellbeing of all members of the Brock community.

In addition, there is growing interest in the use of labyrinths for teaching and learning. It is experiential in nature and provides a creative space for deepening reflection. It is hoped that faculty and instructors will utilize the labyrinth to assist students in making connections between course curriculum and its relevance in their own lives. ​

In 2018 the Centre for Pedagogical Innovation reached out to various partners on campus to gauge interest in the building of a Brock University labyrinth. The first meeting occurred in October 2018, with representatives from CPI, Co-op, Career and Experiential Education, Facilities Management, Human Resources, Marketing and Communications, Student Wellness and Accessibility, Student Life and Community Experience, the Library, and BUSU and the GSA. Faculty members and the Accessibility Coordinator also lent their support and ideas. The group began meeting monthly to learn about labyrinth history and benefits and to share ideas.

Grounds Management, under the leadership of John Dick, was instrumental in its support, both with in kind planning and in the actual build. Approximately a dozen sites on the main Brock campus were looked at and a final site was chosen at the corner of Weather Station Field in front of the Campus Store. This site provides accessibility with access from adjacent sidewalks and is visible from the roads. Trees provide some privacy and a green backdrop.

Images of the construction of the labyrinth 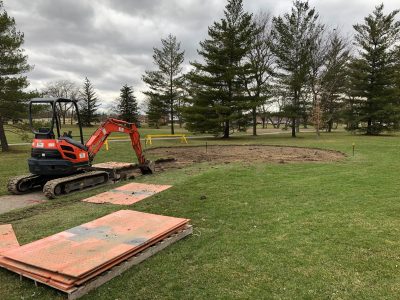 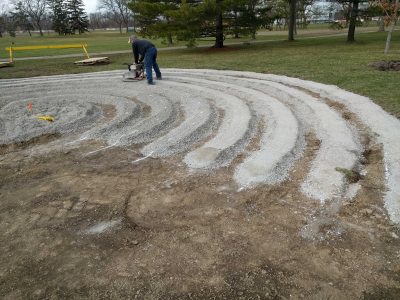 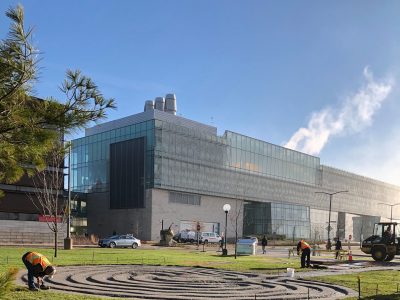 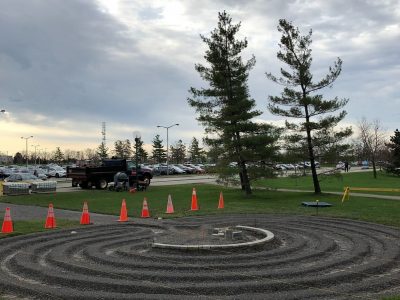 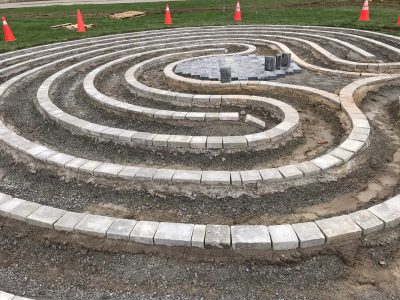 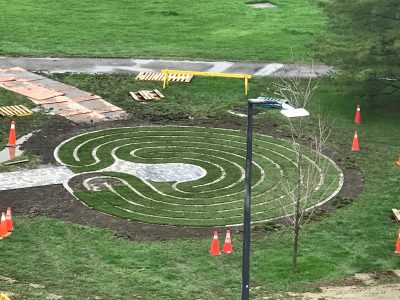