Apart We Were Together: Exhibition Introduction 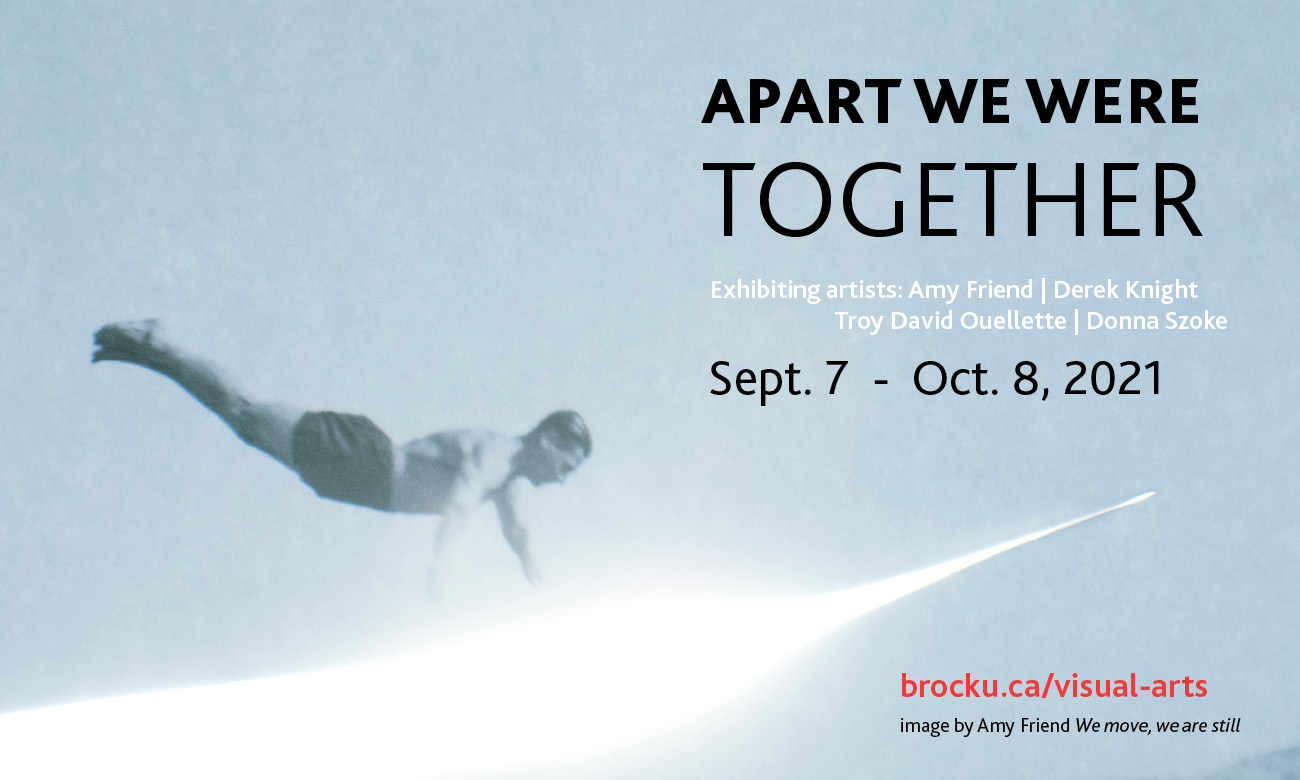 Apart We Were Together is loosely borrowed from Jacques Rancière’s The Emancipated Spectator (2009) and his concept of “Apart We Are Together.” In this original section of the text, Rancière takes up Stephane Mallarme’s sentiment “apart we are together” from the writer’s short story “The White Water Lily” to discuss how the aesthetic experience has the potential to create a community of disagreement. For Rancière, a philosopher and cultural critic, this disagreement stemmed from a physical separation of the artwork from its maker, the social separation of the artist from the viewer and the viewers from each other.

Within the lifeblood of creative practitioners is the need to engage with others to enrich their lives and praxis. For an artist to create anything requires a leap in the dark, at least initially, where one ventures into uncharted waters. In Amy Friend’s work, photochemistry mingles with the subject and the history of wet processes photography gets tangled up in nostalgia, the notion of the trace and the ephemeral nature of the photographic record. In her photographs, We move, we are still, from 2020 and the Multi-verse Series, there is no “real” frame of reference. As Friend suggests, “Photographs constantly shift, and their seeming solidity becomes malleable. I respond to this thought by intervening with light on the photo’s surface to bring forward connections that also leave room for the timely allusion to a global existential discomfort.” It is important to understand what photographic traditions are omitted from Friend’s inquiry in these large-format reproductions. These photographs are not documents because they are trying to have an indexical relationship to the subject; they are more expansive. In contrast, the association between events becomes evident in Derek Knight’s photographs. In these works, the subject is reproduced, simulated, and juxtaposed with many historical events, which all had specific consequences. Reflecting on the photographic medium itself, he suggests that, “What makes my photographs potentially compelling is the space in which they exist between appropriated and real<>reel time, documented moments from the artist’s life or the mediated experience. The disconnect from the channelled narratives of the original broadcast or the printed page makes for a visually opaque but cryptic relationship.” There is an anti-aesthetic present here too that plays off other artistic works referencing Dan Graham, Iain Baxter, and David Salle in a mix of various realities. Ruminating on the position of photography as a medium, Knight pays an homage to some of the roots of conceptualism. As he suggests, “What is it to make an image, to appropriate or construct an image using a camera? The very act of copying a mediated image from a newspaper or television screen both objectifies and instrumentalizes the medium of photography.” It is important to point out that each of these representations often contains specific references. For instance, as he aptly suggests, “Songs of Innocence (2000) references William Blake’s illustrated poem in which he tests the conundrum faced by the dawning of Enlightenment thinking, concepts of the divine and the rude awakenings of a secular world. At the same time, as the image appears to be receding, the more inchoate the details become; signals become noise. This is the crux I seek between apprehension and loss of meaning. Yet, titles, be they a quotation or reference, summoning art history, philosophy or literature, provide pathways back to a semblance of meaning(s) conjured by the viewer.” When looking at this work, there is a kind of memory feedback loop that amplifies some meanings and mutes others. We also see this in Donna Szoke’s video projection Monster Game, where the footsteps of a young child, being chased by a crowned ghost, echo throughout the gallery. One glance shows how an invented (indoor) game, to pass the time of the pandemic, has other meanings that speak to the broader issues of capital, globalization and colonization – where a game is not just a game. As Szoke recounts, “This animation began as have many moments through our pandemic: my partner and young child improvised some kind of ridiculous game, and I reach for my phone or camera to document the antics. We had been at home, and in our happy times, we were playful, full of joy, and thankful for our safe space. At other times we were fraught: feeling trapped, bereft, at a loss, aggrieved, grieving, and deeply saddened without our friends and family’s physical presence.” This emphasized animated antic is made more potent by a vinyl frame, of a cell phone, on the gallery wall where the projection resides. Time spent at home, improvising a way to pass the time, in the face of waiting for a pandemic to subside, is also evident in Troy Ouellette’s work – where materials are refashioned into something “new.” In Ouellette’s installation, cut fibre-optic cables allow light into the gallery. This work consists of fibre-optic cable given to him by a crew installing high-speed internet in the artist’s neighbourhood. The reworked cable lengths form circular chains referencing connectedness and isolation when government-mandated contact restrictions were imposed. But these chains may be more about linking us up to a vast network of subscription-based services. As Ouellette suggests, “I blended the physical or “real” material with the “virtual” forms of electronic communications that would usher from such networks. In this installation, the virtual is a potential for movement where things have not yet happened. At the same time, material things must exist to provide the elements in an endless entanglement of possibilities. The hope of this work exists in its insistence upon light and colour within a dialogue that invites skepticism.” In this work, the faint sounds of antiquated, dial-up can be heard somewhere near the ceiling as an anachronism. This becomes a faint ghost of past technologies that helped to foster the worldwide web now entangled with the spectres of artificial intelligence, privacy issues and e-commerce.”

Many threads seem to tie, or even knot, these works in this exhibition together, namely the attention paid to something constructed, reconstructed, or even deconstructed within a space of skepticism. Indeed, this is what Rancière might have called “disagreement”. However, the artists in this exhibition claim that even as communal separation anxiety plagued us, there was always the possibility of wonderment and dialogue. It may also be the case that artistic works go beyond what is possible (or even probable) simply by showing us how imagination pushes the boundaries of human thought. Yet, in this exhibition, one can feel a malaise mirrored by what creative practitioners felt during the pandemic when live cultural events, a significant touchstone for connecting people, was diminished. Often described as non-essential, the cultural sectors of museums, galleries, theatres, and music venues ceased operation, and cultural producers responded, in kind, by creating online events as a determined way to reach out to others. In the face of this, Apart We Were Together underscores the importance of solidarity, especially during challenging times. This exhibition signals an urgent call to find ways to reengage. At the same time, it welcomes the students who bring joy, colour, and life back into the Marilyn I. Walker School – to start again.