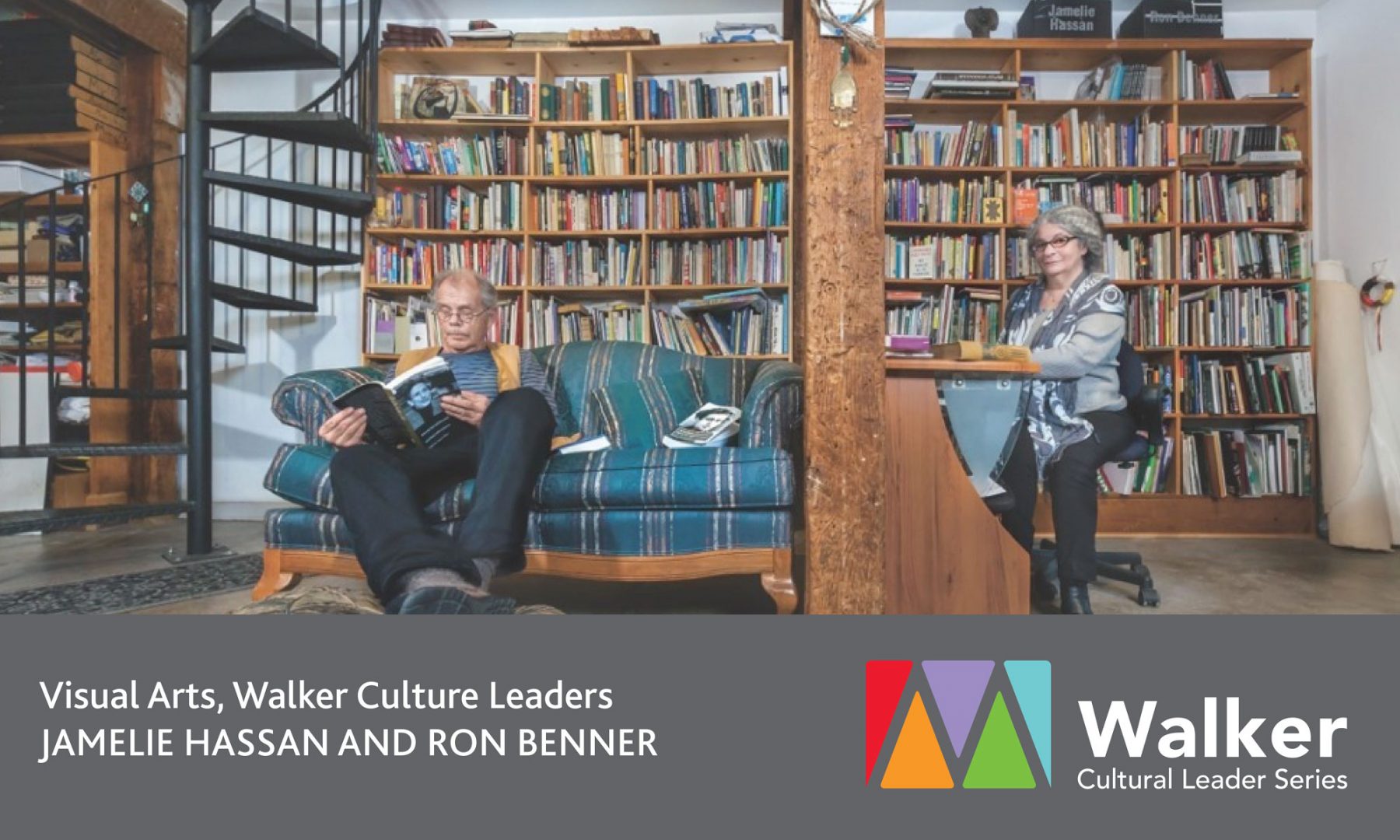 The Walker Cultural Leader Series continues in 2021, beginning with an engaging talk from artists Jamelie Hassan and Ron Benner on Monday, Jan. 18. The series continues in a virtual format for the 2021 season.

View the presentation premiere and join in the chat on the Marilyn I. Walker School of Fine and Performing Arts YouTube channel.

Jamelie Hassan, born in London, Ontario, of Arabic background, is a visual artist and long-time member of CARFAC who is also active as a lecturer, writer, and independent curator. She has organized both national and international programs including Orientalism and Ephemera, a national touring exhibition, originally presented at Art Metropole, Toronto and most recently Dar’a/Full Circle for Artcite Inc. Windsor, ON. She was one of the founders of two artist-run centres in London, Ontario: the Forest City Gallery (1973-present) and the Embassy Cultural House (1983-1990). Her work is represented in numerous public collections in Canada and internationally, including the National Gallery of Canada, the Morris & Helen Belkin Art Gallery, University of British Columbia, Vancouver, BC ; and the Library of Alexandria ,Alexandria, Egypt. Other recent projects and group exhibitions where her works have been featured include, Here: Contemporary Canadian Art, curated by Swapnaa Tamhane, Aga Khan Museum (2017); Toronto: Tributes + Tributaries, 1971 -1989, curated by Wanda Nanibush, Art Gallery of Ontario (2016 – 2017); In Order to Join: the Political in a Historical Moment, organized by Museum Abteilberg in Monchengladbach, Germany (2013-14) and Mumbai, India (2015). Receipient of numerous awards, in  2001 she received the Govenor General’s Award in Visual Arts and in 2018 an honorary doctorate from OCAD University, Toronto. For more information visit: www.jameliehassan.ca

Ron Benner is an internationally recognized, London, Ontario – based artist whose longstanding practice investigates the history and political economy of food cultures. Benner originally studied agriculture engineering at the University of Guelph 1969/70. Finding himself ethically opposed to industrial agriculture and bioengineering, he began to travel and research the politics of food. In 1995, he began working with Rural Advancement Foundation International, Ottawa (RAFI). In 2000 he was awarded the Canada Council Studio in Paris. In 2005 he participated in Art, Geography and Invisibility at an international geography symposium in Olot, Catalonia, the University of Barcelona, Spain. In 2010 he was appointed Adjunct Research Professor in the Visual Arts Department, Western University, London, ON. Ron Benner’s mixed media installation works, including commissions of  photographic-garden installations, have been shown in solo and group exhibitions at Museum London, the Art Gallery of Ontario, Toronto, Western University, London, Ontario, Wilfrid Laurier University, Waterloo, Ontario and many other galleries, museums and cultural institutions in Canada and internationally. His work is included in numerous public collections both in Canada and internationally including the National Gallery of Canada and the Art Gallery of Ontario. He has recently been appointed artist in residence in the Department of Environmental Science at the University of Guelph, Guelph, Ontario, 2020-2023. For more information, please visit:www.ronbenner.ca