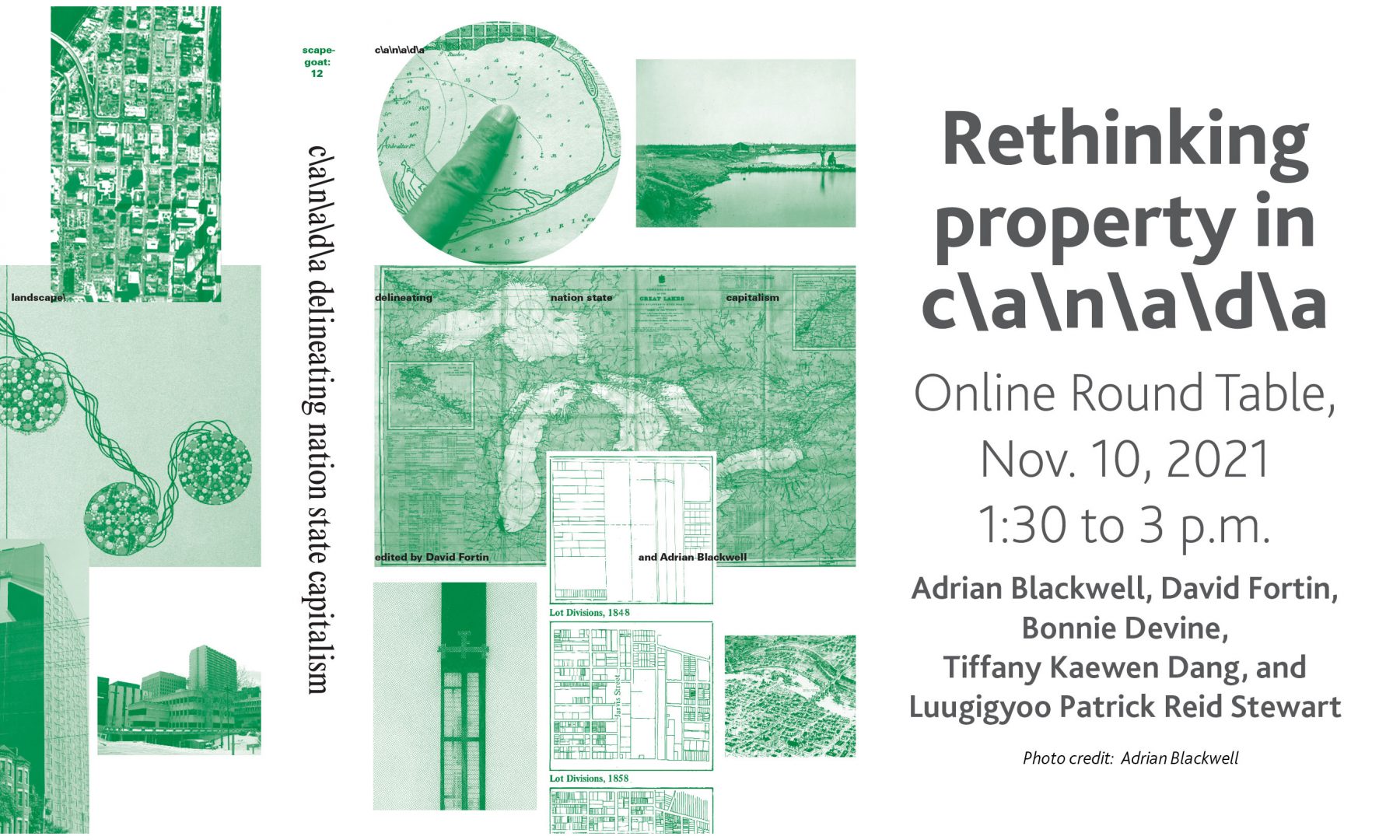 Indigenous and settler architects and urbanists reimagine Canadian cities.
The conversation was informed by issue 12-13 of the journal Scapegoat: Architecture/Landscape/Political Economy titled c\a\n\a\d\a: Delineating nation state capitalism edited by David Fortin and Adrian Blackwell. The issue looks at property division as the hinge between settler colonialism and architectural and urban form.
This event drew upon research supported by the Social Sciences and Humanities Research Council (SSHRC) and the Office of the Vice-President, Research at Brock University.

Blackwell, Adrian
Spanning photography, video, sculpture, urban theory, and design, Adrian Blackwell’s practice responds to the political and economic forces inscribed in physical spaces. Operating between art, architecture, and urbanism, his projects unfold alongside research focused on the local and global effects of neoliberal urbanization and the inherent paradoxes of public space and private property. Blackwell’s work has been exhibited at artist-run centers and public institutions across Canada, in the United States and at the 2005 Shenzhen Biennale of Urbanism\Architecture, the 2011 Chengdu Biennial, and the 2019 Toronto Biennial of Art and Chicago Biennial of Architecture. He has taught architecture and urbanism at Universities in Chongqing, Michigan, Harvard, and Toronto and is now an associate professor at the University of Waterloo. He is an editor and founder of the Journal Scapegoat: Architecture / Landscape / Political Economy. With David Fortin, he is co-editing Issue 12-13—c\a\n\a\d\a: delineating a capitalist nations state.

Devine, Bonnie
Bonnie Devine is an installation artist, video maker, curator, and writer. Her work emerges from the storytelling and image-making traditions that are central to Anishinaabe culture. Though formally educated in sculpture and installation art at OCAD and York Universities, Devine’s most enduring learning came from her grandparents, who were trappers at Genaabaajing (Serpent River) First Nation, on the north shore of Lake Huron. Using cross-disciplinary approaches and iterations of written, visual, and performative practice, Devine explores issues of land, environment, treaty, history, and narrative. Her installation, video and curatorial projects have been shown in solo and group exhibitions and film festivals across Canada and abroad. She is an Associate Professor Emerita and the Founding Chair of the Indigenous Visual Culture program at OCAD University.  She lives and works in Toronto. She won the Governor General Award in Visual and Media Arts in 2021.

Dang, Tiffany Kaewen
Tiffany Kaewen Dang is a landscape architect and territorial scholar from Treaty 6 Territory in Edmonton, Alberta. Her research lies at the intersections of landscape, native studies, ecology, political theory, history, and geography. Her core approach embraces alternate – often non-western, or non-patriarchal – knowledge systems as grounded methods for subverting dominant power structures and infrastructural networks shaping territory today. She received her MLA from the Graduate School of Design, Harvard University (2014 – 2017) and is currently a PhD student in the Department of Geography, University of Cambridge. Among other publications is “A Glacial Pace: Delineating the Contours of Colonization in Canada’s National Parks System,” in Extraction Empire: Undermining the Systems, States, and Scales of Canada’s Global Resource Empire edited by Pierre Belanger (MIT Press, 2018). Her professional experience includes work as landscape researcher, designer, project architect from 2015 to 2018 at the OPSYS Landscape Infrastructure Lab, Cambridge, MA, USA, and a 2014 position as landscape designer at Topotek 1 Landscape Architects, Berlin, Germany.

Fortin, David
Born and raised throughout Alberta and Saskatchewan, David Fortin is a Member of the Royal Architectural Institute of Canada, a LEED accredited professional, and a registered architect in the province of Ontario. He previously worked with firms such as GEC Architects and McKinley Burkart Architects in Calgary. At the McEwen School of Architecture, Laurentian University, Sudbury, Fortin has taught various studios, including the graduate Indigenous Design studio, and developed an introductory building science course emphasizing the impact of climate change on architectural thinking. In 2018, he completed a study of Red River Métis contributions to architectural thinking in Canada as part of a Social Sciences and Humanities Research Council (SSHRC) grant. Fortin is a member of the Métis Nation of Ontario and the RAIC Indigenous Task Force that seeks “ways to foster and promote indigenous design in Canada.” He was co-curator of UNCEDED: Voices of the Land, a team of Indigenous architects under the leadership of Douglas Cardinal, who represented Canada at the 2018 Venice Biennale in Italy. Since January 2018, he has worked with the National Research Council of Canada to coordinate community input for housing in remote northern locations for an upcoming Technical Standards publication. He has also advised Indigenous Services Canada on the Indigenous Housing Innovation Initiative and will continue to participate in this program as a mentor. In 2019, David T Fortin Architect Inc., in joint venture with Smoke Architecture and Wanda Dalla Costa Architect, worked for the Assembly of First Nations to provide an Indigenous vision for the new Indigenous People’s Space in Ottawa. Fortin was the inaugural Associate Director of the Maamwizing Indigenous Research Institute and is the current Director of the McEwen School of Architecture.

Read more: Concepts of land and ownership in Canada at centre of upcoming Brock panel discussion