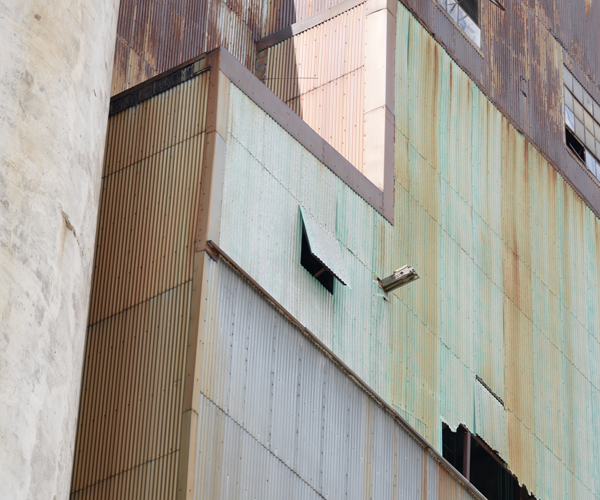 Post-Industrial Ephemera: Soundings, Gestures and Poetics
Silo-City welcomes you to an exhibition featuring artists on both sides of the Niagara River

Buffalo, New York and St. Catharines, Ontario are neighboring cities separated by a river and a border, but they also nurture a strong sense of regional togetherness and cultural kinship. Colleagues in Sculpture, Arts, Comparative Literature, English Studies, Visual Arts, Studies in Arts and Culture, and French Studies at SUNY on the U.S. side and Brock University on the Canadian side will share a common space at Silo-City, Buffalo between April 22 – 29. Coming from different places and practices, we wish to foster interdisciplinarity.

Together, we want to reflect on the notion of dispersal. A concrete monument, an overwhelming structure, Silo-City is also a crucible of ephemeralities – sounds dissipating as they echo up the walls, the wind blowing through hollow buildings, the decay of objects deposited in the empty halls, the temporary presence of others, productive resonances of creative experiences. Is Silo-City a memorial? Silos are built to maintain large networks of commodity exchange for human and animal sustenance. Here, however, the workers are gone; the buildings are exposed to inclement weather; the projects we bring with us will disappear, be dispersed or displaced. Silo-City, despite its imposing constructions, invites visitors to become more perceptive to the transience of human endeavours.

We will plant colourful seedpods, install a neon sign in tribute to the Buffalo river that flows by Silo-City, crush words out of their discourse, scatter mourning songs for long gone lives, bring images, noise and stories from other places. We will capture the brilliance of a moment.

A follow-up one-day symposium at Rodman Hall Art Centre, St. Catharines will document and revive the exhibition on September 16, 2017.

For more images and information, please visit the exhibition website.

ArtIndustria+ was formed in 1995 by Derek Knight and Franc Petric, two Canadian artists who reside in the Niagara region. Motivated by the desire to work collaboratively, they have developed projects over the years with a focus on art, research and technology. Underlining their concerns with the dialectical relationship between ecology and industry, their conceptual models combine installation techniques and situational aesthetics to further examine the artist’s role in post-industrial society.

Continuous Monument is an affiliation of interdisciplinary culture-makers working among design, text, architecture and sound fields. Born from the ashes of a contaminated political landscape, Continuous Monument gathers to spatialize sound and signal in temporary, site specific soundscape improvisations. Monument will perform at The American in Silo City as an acoustic inhabitation; live ghosts active in remnant industrial anatomy.

Akasya Crosier is a multifaceted artist based in Western New York. She is currently a senior at UB studying Studio Art and Communication. In her artwork, she focuses on effective communication skills, idealized spaces, and bright imagery.

Catherine works in Arts and Culture, and in Modern Languages, Literatures and Cultures at Brock University. She is particularly interested in contemporary Occitan literature, as well as the co-presence of literatures and visual arts. She includes her four languages in her creative work.

Jim Watkins lives in Silo-City and is our silo-minder/keeper. His passion for the arts and for Silo-City is central to our cross-border project.

Lauren Regier is Honours graduate from Brock University’s Visual Arts program, and is an emerging artist based in the Niagara Region. Much of her work is inspired by the notion of functionality and relationships between the industrial world and the natural realm. Interested in the experiential nature of contemporary art, her practice includes photography, installation, performance, drawing and video.

Reitzenstein has held over 100 solo exhibitions and over 300 group exhibitions globally, and has completed over 25 public and private art commissions. His work is represented in more than 50 public and corporate collections internationally. Reitzenstein has been Director of the Sculpture Program at, SUNY, Buffalo since 2000. He is represented by the Olga Korper Gallery in Toronto.

Casey Ridings is currently a Graphic Design student at the University at Buffalo. She is intrigued by the geometric nature of organic patterns; through a spontaneous and intuitive process she creates intricate paintings and drawings inspired by the exploration of her experiences and emotions.

Cody Schriever is a student in the University at Buffalo art department. His paintings and sculptures deal with human nature, and the structures of its self-perception. By combining various styles of painting and modes of expression he creates a complex narrative of the global condition.

Shawn is an Assistant Professor in the Visual Arts Department, Marilyn I. Walker School of Fine and Performing Arts at Brock University. His research interests include contemporary painting, drawing and printmaking practices concerning relational abstraction, environmental aesthetics, religion, the landscape as well as issues bordering abstraction and representation.

Lucas is an artist currently residing in Buffalo, NY. His practice examines the different methods of representation that exist within the realm of photography and explores the truth value that a photograph holds as a piece data that showcases life.

Sophia Yung is a Chinese American graphic designer and artist from Brooklyn, NY. Her most recent work involves the analysis of Asian American culture shock, language barriers, mixed martial arts and the role of financial capital in the precarious 21st century.

Jean Zhu is currently a Media Study student at the University at Buffalo. She is both a photographer and a filmmaker. Her experimental films and straightforward photographs of everyday objects and scenes are noted for their color combination, explicit composition and rich content.