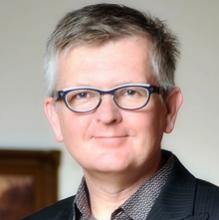 An internationally recognized art curator and writer with extensive experience in arts administration in Canada is the new director/curator of Brock University’s Rodman Hall Art Centre.

After two and a half years as executive director of the MacKenzie Art Gallery in Regina, Sask., Stuart Reid will assume his new position in January 2012.

“We are pleased to have someone of Stuart’s calibre join our team at Rodman Hall,” says Douglas Kneale, Dean, Faculty of Humanities, Brock University. “His experience and leadership will help to foster our region’s vibrant arts scene, and his expertise will be an asset in the development of opportunities for Brock to engage our communities.”

“The post of director/curator at Rodman Hall Art Centre holds a lot of interest for me,” says Reid in a press released issued by the MacKenzie Art Gallery. “I’m eager to continue my curatorial work and writing. I’ll also have teaching opportunities at Brock University. This move also takes me back to Ontario and my family.”

Reid is a Past President of the Board of Directors of the Ontario Association of Art Galleries. He has served as director and curator of the Tom Thomson Memorial Art Gallery in Owen Sound, Ont., is an alumnus of the J. Paul Getty Trust’s Museum Leadership Institute at the University of California at Berkeley, and is also an elected member of the International Curators of Contemporary Art Network based in Luxembourg.

Born in Dundee, Scotland, Reid immigrated to Canada in 1967. He studied art and art history at York University (BFA 1986) in Toronto. From 1990 to 1992, Reid was an associate curator at The Craft Gallery of the Ontario Crafts Council in Toronto. From 1992 to 2001, he was curator at the Art Gallery of Mississauga. In 1997, he was a guest of the British Council on a study tour of contemporary art in Northern Ireland.

Rodman Hall Art Centre is committed to excellence in visual arts programming and education, providing services and resources to students and faculty of Brock University and the Niagara region. Nationally, the Centre supports the development of artists and cultural workers in southern Ontario through the dissemination of contemporary art.