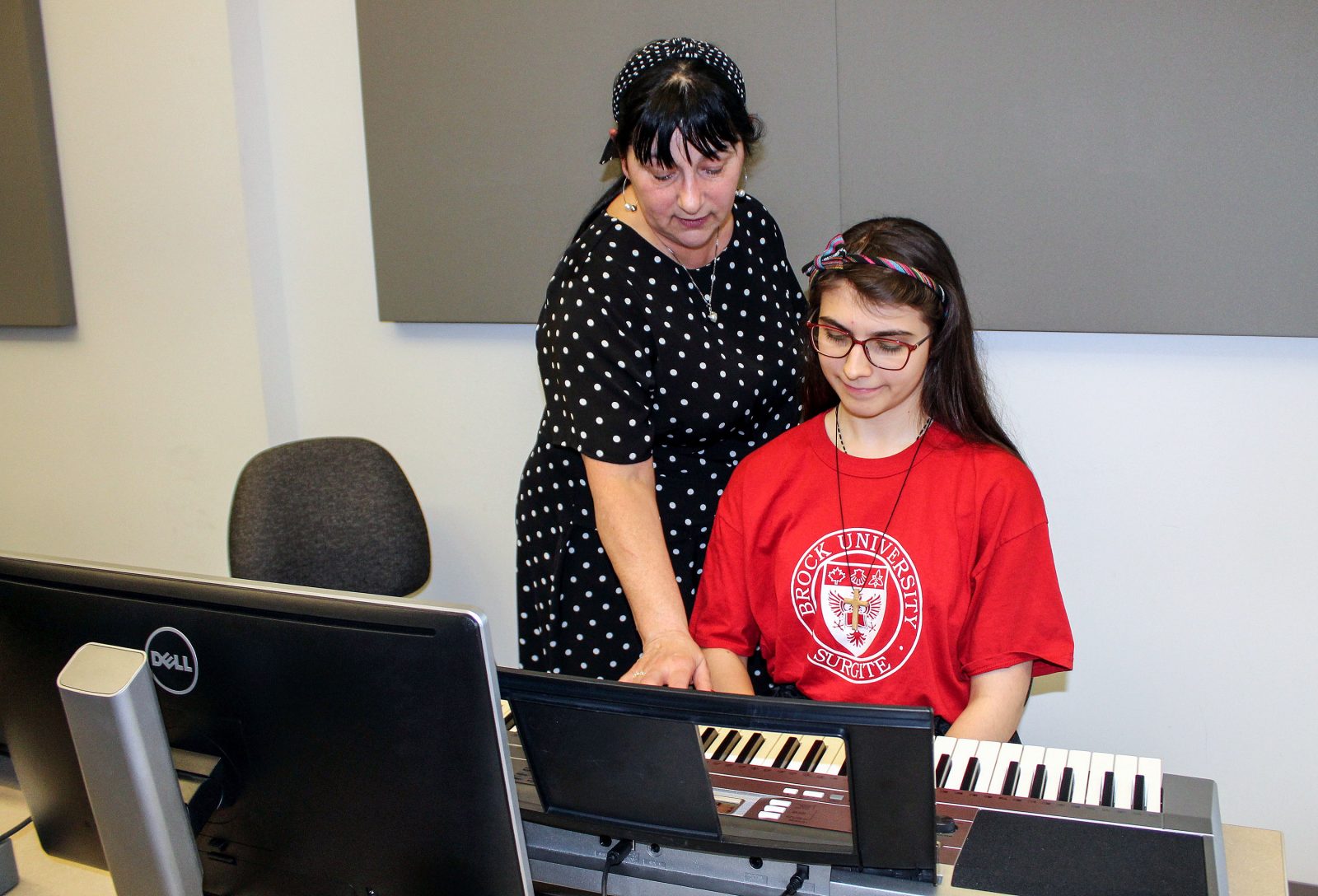 First-year Brock Music student Cassandra Sullivan, right, learns the mechanics of performing opera in French with the guidance of Suzanne Leclerc, an arts teacher at École élémentaire LaMarsh in Niagara Falls. Leclerc led one of the numerous workshops in the Monde le Son Festival that took place at the Marilyn I. Walker School of Fine and Performing Arts May 13 to 15.

Brock University students got to offer some musical insight and even take in a lesson or two during a recent French festival held at the Marilyn I. Walker School of Fine and Performing Arts.

For the first time in its four-year history, the annual Monde le Son Festival, or World Sound Festival, was hosted at the MIWSFPA by French school board Conseil scolaire Viamonde.

The event drew about 200 elementary and secondary school francophone students from across Ontario to participate in workshops from Monday, May 13 to Wednesday, May 15. Students learned how to play instruments, sing in different vocal styles, compose music and perform in front of live audiences in several performances held at the FirstOntario Performing Arts Centre (PAC).

Brock Music students were invited to participate in the workshops and to observe the different strategies teachers had for leading the sessions.

Brock Recruitment and Liaison Officer Madison Roca said she jumped on the opportunity to host the festival when the board initially suggested it last year.

“It was a great chance to welcome new students to our campus and expose them to the possibility of pursuing the arts beyond high school, while also building a meaningful relationship with a new school board and supporting their initiative,” she said.

Event organizers said the MIWSFPA seemed a fitting choice for the event after the decision was made to move the festival from its former home in the Greater Toronto Area. Students interested in music were attracted to the downtown arts school’s music facilities and close proximity to the PAC, and embraced the opportunity to enjoy a taste of the university experience while staying in Brock’s Earp Residence.

“I liked the idea of joining a post-secondary institution to give the kids that experience and to also entice them to do further studies after they graduate from secondary school,” said Jeffrey Hughes, Viamonde’s Director of Educational Services. “It was a winning combination.”

Mark Nouhra, the board’s Cultural Co-ordinator, said the opportunity to foster interaction between current Brock students and Viamonde’s younger learners was also a plus.

“Knowing we could have some Brock students talk to and interact with our students, to see how things really happen here in a university music environment, was a priceless experience,” he said.

With the goal of one day working as a vocal teacher and choir director, she said that “observing how teachers are teaching and what strategies they are using to engage with the young people was really useful for me.”

Sullivan also felt the festival was an opportunity to embrace and celebrate her francophone roots.