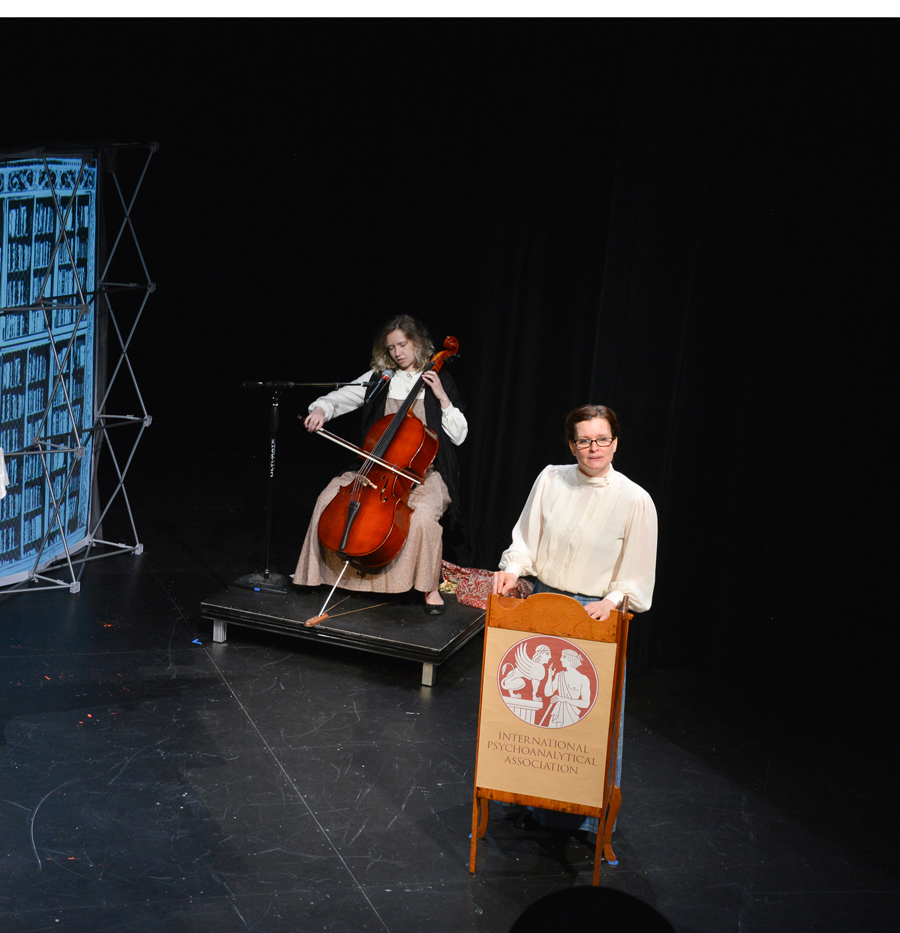 Cellist Grace Snippe (BMus ’16), left, and Danielle Wilson bring the story of 20th century psychoanalyst Sabina Spielrein to life in Sabina’s Splendid Brain. The performance opens on Sept. 14 at the Marilyn I. Walker School of Fine and Performing Arts. (Photo by George Enns.)

While Sigmund Freud and Carl Jung have become synonymous with psychoanalysis, the name Sabina Spielrein might leave you drawing a blank.

The Stolen Theatre Collective hopes to change that by bringing the rarely told story of the Russian-Jewish psychoanalyst to life in a new production at Brock beginning next week.

Sabina’s Splendid Brain, which opens Sept. 14 at the Marilyn I. Walker School of Fine and Performing Arts (MIWSFPA), chronicles the life of the tenacious and passionate Spielrein as she struggles through the circumstances of her family, her education and her therapy, the professional barriers facing women and wartime anti-Semitism.

Spielrein was often known in relation to her famous colleagues: first as a patient, then as a lover of Jung, and later as a student and friend of Freud. As a psychoanalyst in her own right, however, she moved beyond them both to become one of the great thinkers in 20th century psychology.

Her work was all but wiped from the history books due to Joseph Stalin’s repression of intellectuals and the Nazi invasion of her hometown of Rostov-on-Don, where she and her daughters were killed. Her diaries were recently discovered, however, and her publications were re-examined to reveal the profound impact that her work had on her teachers and peers.

“Sabina had to fight for her voice,” said Brock Associate Theatre Professor Gyllian Raby, the production’s Director. “She walks the boundary between genius and delusion, and this production invites the audience to experience her journey from a screaming teenager with spittle in her hair to the woman who wowed Freud’s intellectual Vienna Circle.”

“This is a project that fully explores the interdisciplinarity between the arts that was the founding dream of the Marilyn I. Walker School of Fine and Performing Arts,” said Wilson, who is also the co-founder and co-artistic director of Stolen Theatre Collective. “Music, theatre and philosophy are a natural trio in this story of how psychoanalysis helped shape modern consciousness.”

Fides Krucker, a Canadian interpreter, vocalist, opera singer and teacher, collaborated on the interdisciplinary production with Stolen Theatre. Her innovative vocal techniques and interdisciplinary work will be further highlighted later this month as part of the Walker Cultural Leaders Series on Wednesday, Sept. 19 at the MIWSFPA.

Tickets are pay-what-you-can-afford ($10, $25, $40 and $55) and can only be purchased in advance through the FirstOntario Performing Arts Centre box office.

For more information on the production, please contact info@stolentheatrecollective.ca