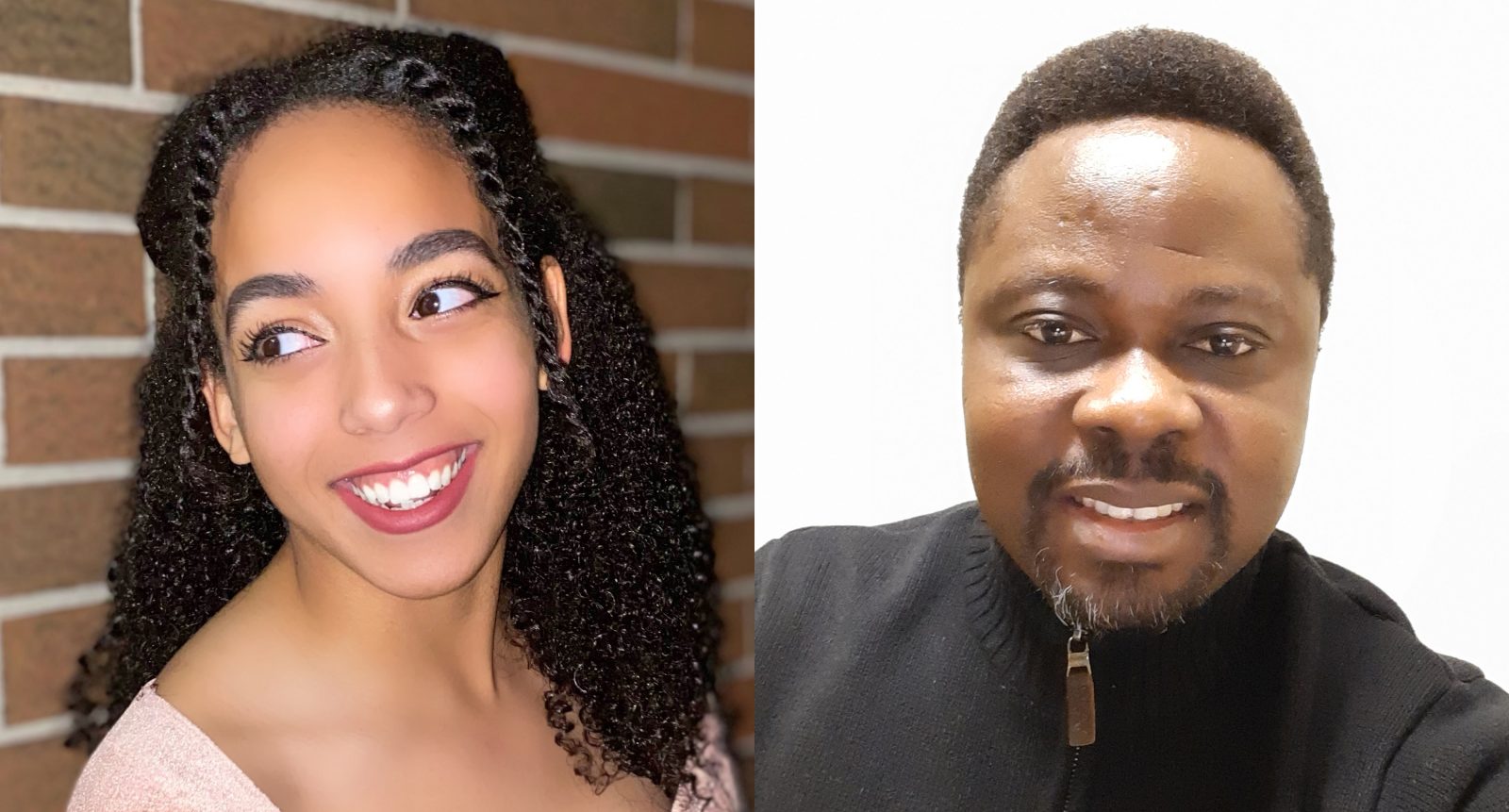 Two Brock University students will be joining a historic group of Black theatre makers as part of the digital performance series “21 Black Futures.”

Presented by Obsidian Theatre in partnership with CBC Arts, “21 Black Futures” has brought together 63 Black Canadian playwrights, actors and directors to create art during the pandemic and answer the question, “What is the future of Blackness?”

The result is 21 filmed monodramas (theatre pieces featuring one person) that are currently premiering on CBC’s streaming channel, CBC Gem.

Now, 21 students from across the country will join the movement, including fourth-year Dramatic Arts student Sid Malcolm, and Soji Cole, a second-year PhD student in Interdisciplinary Humanities.

From a national call that attracted more than 60 applicants, Malcolm and Cole have each been awarded a spot in “Seeding the Future,” which invites Black students to create theatre pieces in response to each of the 21 monodramas of “21 Black Futures.”

“As we work at Obsidian to develop and advance Black artists across the country, we also recognize the glaring lack of Black voices in arts criticism and journalism,” said Michael Sinclair, General Manager of Obsidian Theatre. “Black and other BIPOC artists deserve to have voices at the table from their own communities engaging in dialogue about their work. We can’t wait to see what these 21 Black students have to say.”

For Malcolm and Cole, being a part of this creative response highlighting young Black voices is very meaningful.

Malcolm said being part of the project gives her and a large group of Black theatre students the chance to have their voices heard.

“This is a space specifically intended to cultivate young Black artists and help them express what their experience is, and how that shapes the future of Blackness,” she said. “As a young woman of colour, it is often extremely difficult to find pieces of theatre I am able to connect with. There’s often very little representation for People of Colour within the world of theatre. Being a POC in theatre is seen as a rarity and is often trivialized.”

Cole is excited about the project, and said it speaks to him on many fronts.

“As a Black person, a migrant and an international student, I have been involved in conversations on the theme of Blackness and racism since I came to Canada in 2019,” he said. “This is the first one that intersects with a discipline and profession that I have identified with all my life.

“This means a lot to me, as I have always believed that beyond the rhetoric of racism, arts — and especially theatre — can be used as twine to bind community together and dismantle the boundary of segregation.”

Cole, who is a playwright, director and actor, anticipates using his creative and critical wits to respond.

“As someone who has a deep interest in the sociology of arts, I might want to connect my response to the social implication of the performance,” he said.

Malcolm anticipates she may draw on specific aspects of her artistic practice.

“I have a recent reignited passion for poetic writing,” she said. “Typically, I enjoy weaving controversial topics into my writing, which often means critiquing the way that race is perceived around me today.”

She is also intrigued by the marriage of critical thought and artistic expression.

“The arts are a dialogue and having Black theatre students continue the conversation begun by “21 Black Futures” is a hugely exciting prospect,” said Karen Fricker, Associate Professor of Dramatic Arts and the co-ordinator of Brock’s participation in “Seeding the Future.” “I can’t wait to see and hear how they all respond.”

David Fancy, Chair of Dramatic Arts at Brock’s Marilyn I. Walker School of Fine and Performing Arts, said the Department is committed to “the ongoing labour of decolonization, Indigenization, and anti-racism. We are particularly pleased to be involved in such an important initiative,” he said.

Malcolm is energized by the many conversations “Seeding the Future” ignites, noting the opportunity for discussion while fostering growth through shared experiences.

“I think a large outcome from this project will be the amount of networking that is possible for young Black artists that would be difficult to do without this project,” she said.

Cole acknowledges the significance and enduring nature of this project.

“While this is not a policy project, the expectation is that it will strengthen our understanding of memory, redress, and inclusivity,” he said. “The outcome should be able to resonate with every community; it should generate a peculiar echo of its own that will resound in the heart and mind of everyone.”

To read the entries in “Seeding the Future,” visit CBC Arts.

To view the performances in “21 Black Futures,” visit CBC Gem.