Grand finale weekend for Orlando at the MIW Theatre 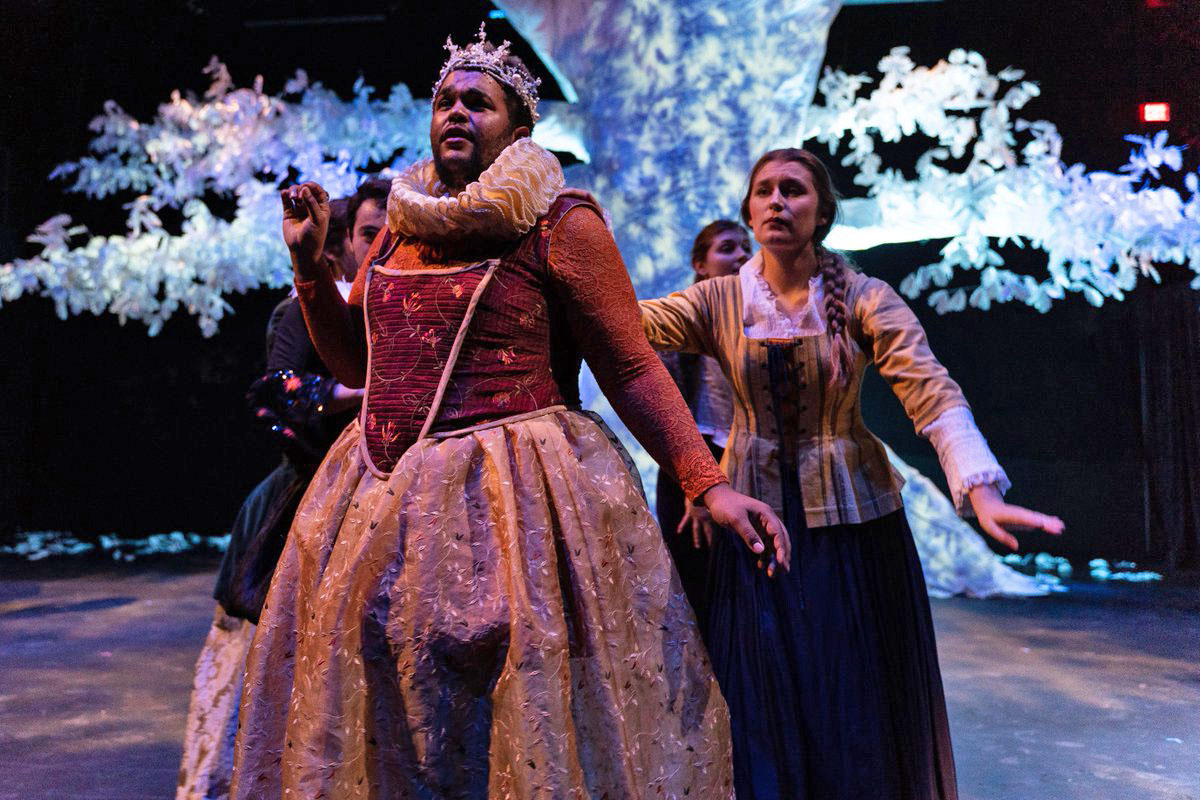 Orlando, on stage at the Marilyn I. Walker Theatre, closes Nov. 2, 2019. Dramatic Arts student Taj Crozier, in the role of Queen Elizabeth, with Jane Smith as Clorinda, on the set of Orlando.

Brock University’s Department of Dramatic Arts is set to present the final performances of an original presentation of Orlando, at the Marilyn I. Walker School of Fine and Performing Arts.

Sarah Ruhl’s adaptation takes viewers from the witty pages of Virginia’s Woolf’s timeless novel into the sensual world of the stage, where identity is learned and unlearned. Join the ensemble as they salsa dance with gender, dash through carefully cut English gardens and land centuries farther than they began, but with the same question: Can we learn who we truly are in a world constructed to tell us who we should be?

The students performing Orlando write about the premise of the production, the urgency of its themes and their deep work as artists. In the program notes they ask:

“Orlando showcases the highs, lows, and complications of love. But not just love in the sense of relationships, but love in all its forms, love in all its beauty. How do we, in the 21st century, re-ground ourselves in our roots in nature?”

Dramatic Arts student Alexandra Chubaty Boychuk has published an insightful and revealing look at the story of Orlando and this production in her article for DARTcritics.com: “Fluid identities onstage at DART: “The question generation” takes on Woolf and Ruhl’s Orlando”. Boychuk reviews some recent initiatives in contemporary theatre to represent voices that society “has tried to silence, especially those who identify as transgender or don’t identify with gender at all”:

“Enter Orlando, a play that directly tackles questions of gender identity and how we perceive it. Orlando: A Biography was written by Virginia Woolf in 1928 and adapted into a play by Sarah Ruhl in 1998. The play follows the titular character through six centuries, starting with the reign of Elizabeth I and ending in the present day. When Orlando turns 30, they stop aging and go to sleep as a man and wake up as a woman.”

Paige Hunt-Harman, the third-year student and actor who plays Orlando, tells us how important this work is to the students of the Department, and of Brock University:

“We are now the question generation,” Hunt-Harman says. “We want to ask more questions; we want to challenge the norms that society has brought upon us and I really think that this play brings that to the forefront.”

Dramaturge and fourth-year student Emily Clegg shares her thoughts about the play and their production:

“What can be said about a play that goes through multiple centuries, including characters that all have very similar questions of identity? Perhaps what we can take from Orlando is the utmost joy in the difficulties of navigating our identities, and the resistance against the social world which tries to tell us who we should be, rather the who we actually are. It’s a beautiful tragedy that continues to mark our current moment in history.“

The public presentation program of the Department of Dramatic Arts (brocku.ca/miwsfpa/dramatic-arts) is an integral part of the Marilyn I. Walker School of Fine and Performing Arts’ mandate to contribute to regional cultural development and build community connections by engaging our audiences with the breadth of talent and creativity of the students, staff, guest artists and faculty of Brock University.

This production premiered the weekend of October 25th through 27th. The final presentations are Friday Nov. 1 and Saturday Nov. 2 at 7:30 p.m., at the Marilyn I. Walker Theatre, Marilyn I. Walker School of Fine and Performing Arts, 15 Artists’ Common, St. Catharines.

Tickets are $20 for Adults or $16 for Students/Seniors and are available through the BrockU university tickets website. brocku.universitytickets.com
Group Sales and special orders are available by contacting Brian Cumberland, Production Manager, at bcumberland@brocku.ca .

Parking is not available on-site, however, there are more than 1,000 spots available in nearby parking garages, surface lots, and on city streets within a five-minute walk to our address at 15 Artists’ Common. Visit stcatharines.ca/en/livein/ParkingLotsGarages for a list of parking locations.