Meaningful Movements Reshape: Come to the Edge at Brock University and the FirstOntario Performing Arts Centre 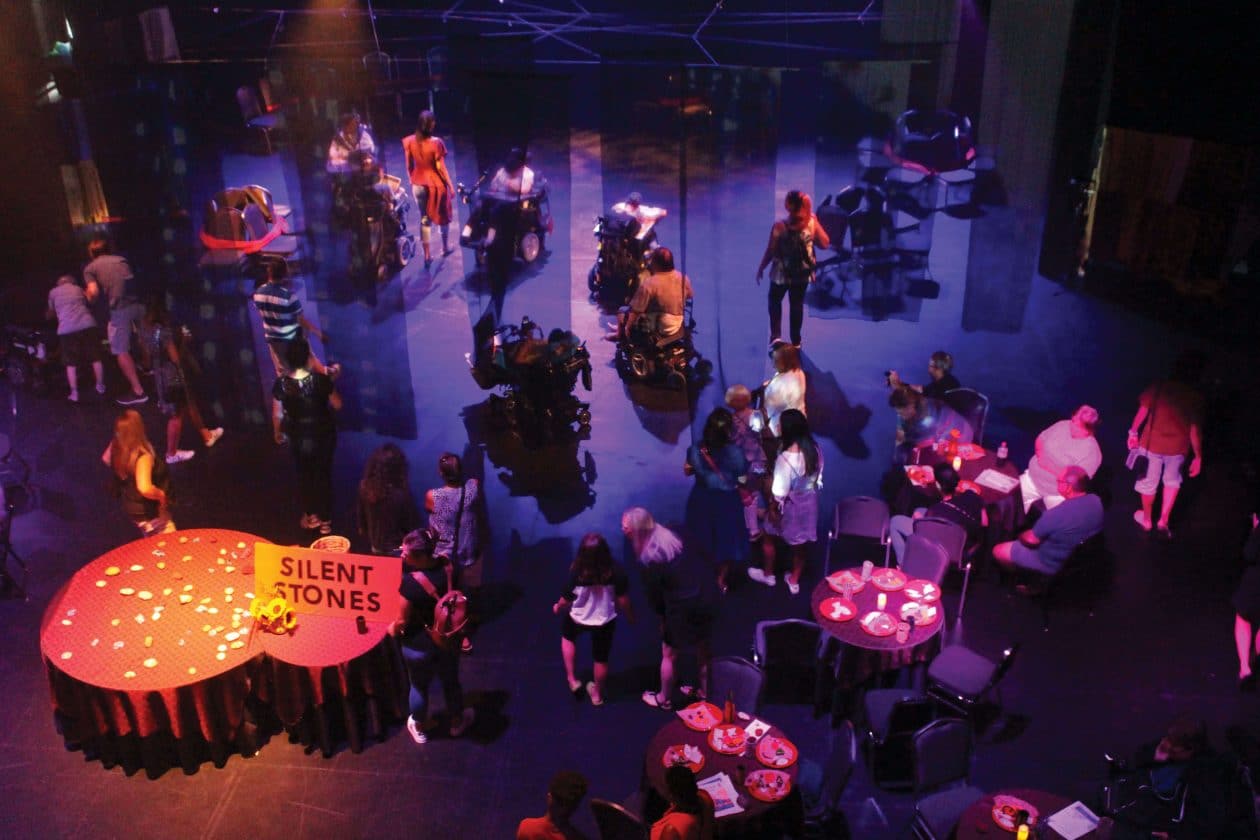 Being invited into a space not built by you, or for you, offers the inherent need for trust and vulnerability. When audiences entered into the Come to the Edge Cafe on August 24/25 at the FirstOntario Performing Arts Centre, audience members were transported to a land of imagination built by, and for, wheelchair users with Cerebral Palsy (CP). This evolving storyscape replaced the traditional confines of theatre with an unlimited creation of shape and space, prioritizing the communication options for performers and participants with CP. The team working on this production aimed to foster an empathetic and reflective space for participants to sit in a potential level of unknown, discomfort, and to ultimately trust that they could not necessarily know the answers to questions like ‘Where are we? What’s it like to not know exactly what’s happening around you? What’s it like when you have to re-evaluate the things that don’t exactly apply?’.

Come to the Edge is a collaborative development of immersive theatre, creating a new understanding of performance through dance, play, and improvisation. The central performance elements built by and for the Imagining Possibilities Leadership Team, made up of automatic and manual wheelchair users with CP. The group has been working with St. Catharines based creative collaborators from the March of Dimes Canada and the Brain Injury Community PET (Personal Effectiveness Training) Re-Entry Program to welcome audiences to trust in the idea that ‘not knowing’ is an opportunity for learning and empathy. The performances are supported by facilitators Jenny Jimenez and Stephen Sillett from Toronto-based organization, Aiding Dramatic Change in Development (ADCID), as well as a much broader team of musicians, artists, and support workers.

With a long-standing history in St. Catharines, the ADCID has been working with the Marilyn I. Walker School of Fine & Performing Arts 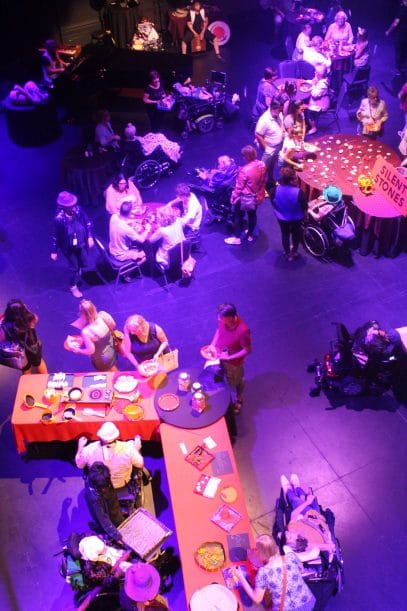 (MIWSFPA) since 2016 with the first iteration of Imagining Possibilities, the precursor to Come to the Edge. As a facility that was built under the universal standards of the Accessibility for Ontarians with Disabilities Act (AODA) for inclusive physically spaces, this began a longstanding partnership for reshaping how St. Catharines builds and understands performance theatre. Professor David Vivian, Director of the MIWSFPA and an ongoing collaborator with ADCID explained that “Inviting the lead artistic team to join us and local artists in our first spring season at the MIWSFPA theatre was one of the highlights of our inaugural year in 2015-16. Come to the Edge is a long term project that has continued to develop over the years and bring together artists in a number of Ontario communities”.

The development of the show over the past several years has taken this community and discussions about it global with performances and workshops in Toronto, Belgium, Prague, Hamilton and St. Catharines. Connecting with the Imaging Possibilities Movement through the Engaging Possibilities project at Brock University in 2015, Kris Daunoravicius has been involved with the growth and evolution of this project ever since. A local to St. Catharines and core member of the Leadership Team, Daunoravicus travelled with the ADCID team to Belgium in 2017 for a week of Envisioned Scenography workshops for the disability-focused Huize Eyckerheyde Residence. In speaking with Daunoravicus and Elaine Drover, another member of the Leadership Team, both utilized a range of augmented technology, body movement, facial expressions, and sound to showcase the range of experiences and stories that were being brought into the creative process during the years of work it took to create the latest version of this production.

In speaking with Come to the Edge performer and ADCID collaborator, Frank Hull and long-time Leadership Team member Laura Leskur, they shared how the creation of this show was rooted in growing one another’s understandings of the other performers, and building a movement vocabulary unique to each performer and each moment of interaction. With a long-term career as a professional wheelchair dancer, Hull spoke to the multiple layers of relationality and equity between those involved in the show, “there has to be those moments where we are becoming equal together, regardless of how my ability may be different from Laura’s. But if we are moving together, we need to find a way to move together and not overpower one another”.

As a verbal CP performer, he explained that “my world is very instant when I communicate. What I’m learning with this group is I’m facing my own ableism. It got me thinking about how from my role I have not been patient enough, not just with this group”. He elaborated on his reflections of needing to be more cognizant of not finishing other people’s sentences, but instead, learned to give people time to communicate within their abilities in order to share and explain their perspectives on the situation. Utilizing her bespoke communication board system*, Leskur also elaborated on these points, highlighting the necessity for patience as to “not miss the magical moments” and the necessity of utilizing body movements and the range of abilities in each performers arms and legs to construct meaningful exchanges. 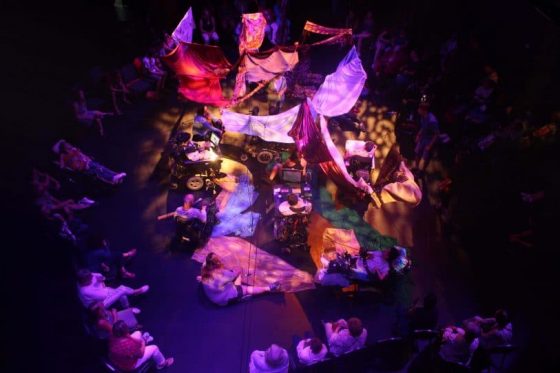 In discussing the necessity of moving towards an inclusive way of facilitating theatre for the performers, Sillett explained that “we created the processes with the community of those who are non-verbal in mind. There’s a lot of routes we could take which would be much easier to get an impact in the short-term, but it wasn’t our aim to go there. Our aim was to try and work honouring the deep engagement. The idea of re-establishing the relationship between the audience, and what their journey is going to be, the community making it”. Hull asserted that his role in adding the movement and dance elements to the show has been “a dream come true to work with manual and power wheelchairs to create movement together,” emphasizing the liberation of spaces focused on the lived experiences of the team rather than a more traditional methodology of prioritizing the audience.

In reflecting on his work with the Imagining Possibilities Movement, Vivian explained how “my specific interests in working with the company lie in aspects of accessibility, universal design and the development process of improvisational, immersive performance spaces under very specific conditions. It has been a very humbling learning experience that we will adapt for my university course development and professional practice”. Breaking from the expected traditions of theatre development, the broad range of creative in communities in St. Catharines can take the fundamental ideas of change to expand who is in the audience, who is on stage, and how can we expand the experiences and interactions between these world.

*Laura Leskur’s communication board is a bespoke system created at Bloorview and extended over the years. Laura has now memorized 1000 words with corresponding numbers. Elaine Drover and and Christine Jimenez have experience using Blissymbols to communicate. Blissymbolics is a semantic graphical language that is currently composed of more than 5000 authorized symbols – Bliss-characters and Bliss-words. It is a generative language that allows its users to create new Bliss-words as needed. It is used by individuals with severe speech and physical impairments around the world, but also by others for language learning and support, or just for the fascination and joy of this unique language representation. Elaine and Christine are both on the Board for Bliss Communication Institute Canada. See blissymbolics.org for more information.

[The creators and producers of Come to the Edge wish to thank the Department of Dramatic Arts of the Marilyn I. Walker School of Fine and Performing Arts, Brock University, for the generosity of their support by providing rehearsal space and technical support in the studios and the MIW Theatre through July and August 2019.

The article was edited and amended for accuracy and reprinted with permission.]