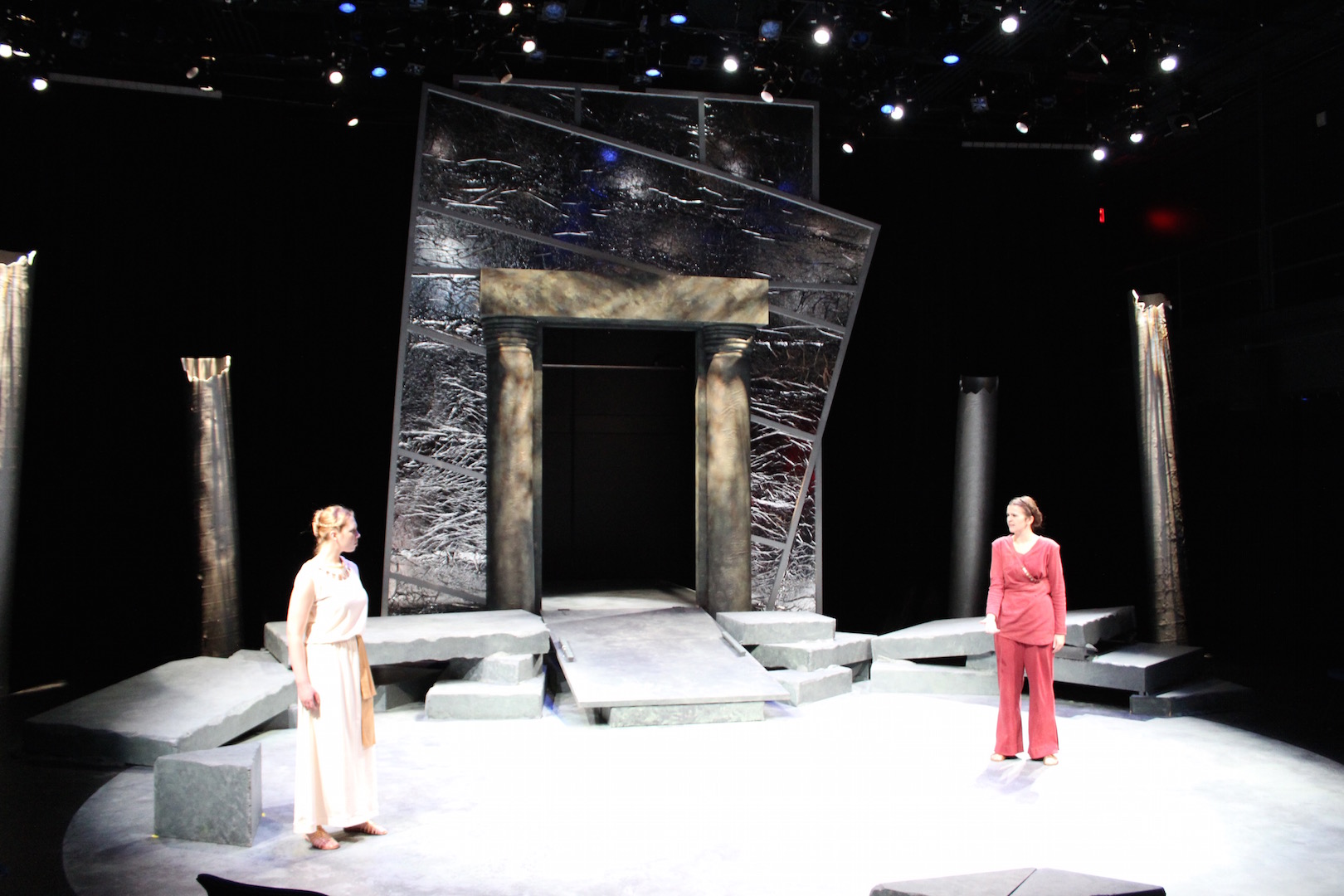 Students in Brock’s Department of Dramatic Arts have been working for months to bring the classic Greek tragedy Antigone to the mainstage this weekend. The production will have a six-show run at the Marilyn I. Walker Theatre in downtown St. Catharines, opening on Friday, Oct. 26. Seen during last week’s media call are actors Catherine Tait (Antigone), left, and Alexandra Chubaty Boychuk (Ismene).

Gender inequality, corruption and the conflict between personal beliefs and the laws of society are all at the centre of Brock’s new mainstage production, Antigone.

And although the classic Greek tragedy is more than 2,500 years old, a roundtable discussion will be held at the University next week to discuss its relevance to today.

Elizabeth Vlossak, History Professor and Director of the Marilyn I. Walker School of Fine and Performing Arts (MIWSFPA), hopes to delve into the reasons why Antigone is one of the most read, performed and adapted plays in all of dramatic literature.

On Wednesday, Oct. 31, she will moderate the roundtable that will include a panel of professors from Brock’s departments of Classics, Political Science, Philosophy and Dramatic Arts.

Faculty, staff, students and the community are invited to join the panellists in the conversation, which begins at 3 p.m. in the Scotiabank Atrium of the Cairns Family Health and Bioscience Research Complex.

The informative and lively discussion will highlight the importance of Antigone and the connections that can be made across academic disciplines.

The panellists will explain why Antigone is not only studied in courses about Ancient Greece but is also used to explore political theory, gender dynamics and various religious and moral problems.

Vlossak organized the event in part to promote the upcoming production of Antigone, which opens Friday, Oct 26. The play is presented by Brock’s Department of Dramatic Arts.

“One of my goals as Director of the MIWSFPA has been to increase student, faculty and public awareness, interest and participation in our programming at the school,” said Vlossak. “But this interdisciplinary panel discussion is also about bridging the two campuses. It’s bringing faculty from different departments together to share their expertise with students and the public, and it’s showcasing how the fine and performing arts can be incorporated into all of our teaching, learning and research, as well as our everyday lives, in meaningful ways.”

The roundtable will begin by exploring the world of Sophocles and Antigone’s significance in ancient drama and performance.

Other topics of discussion include the legacy of Antigone in the fields of politics and philosophy, the continued pedagogical value of studying Antigone, and the play’s relevance in the current political climate.

“Antigone still inspires political rebels today, who find in her obstinate resistance a role model for action in the present,” said Dolgert. “Antigone is for those who refuse to accept the tired cliché that politics is ‘the art of the possible,’ as it is her seemingly irrational affirmation of the impossible that ultimately prevails.”

Griffin, a Dramatic Arts lecturer and the production’s Director, will join the panel and explain why he chose the play for Brock’s mainstage performance.

He hopes to “paint Antigone as a strong woman,” and aims to show how themes of the #MeToo movement are reflected throughout the production.

The production will be held in MIWSFPA’s Marilyn I. Walker Theatre in downtown St. Catharines. Tickets are available through the FirstOntario Performing Arts Centre box office at 905-688-0722 or on the PAC website.