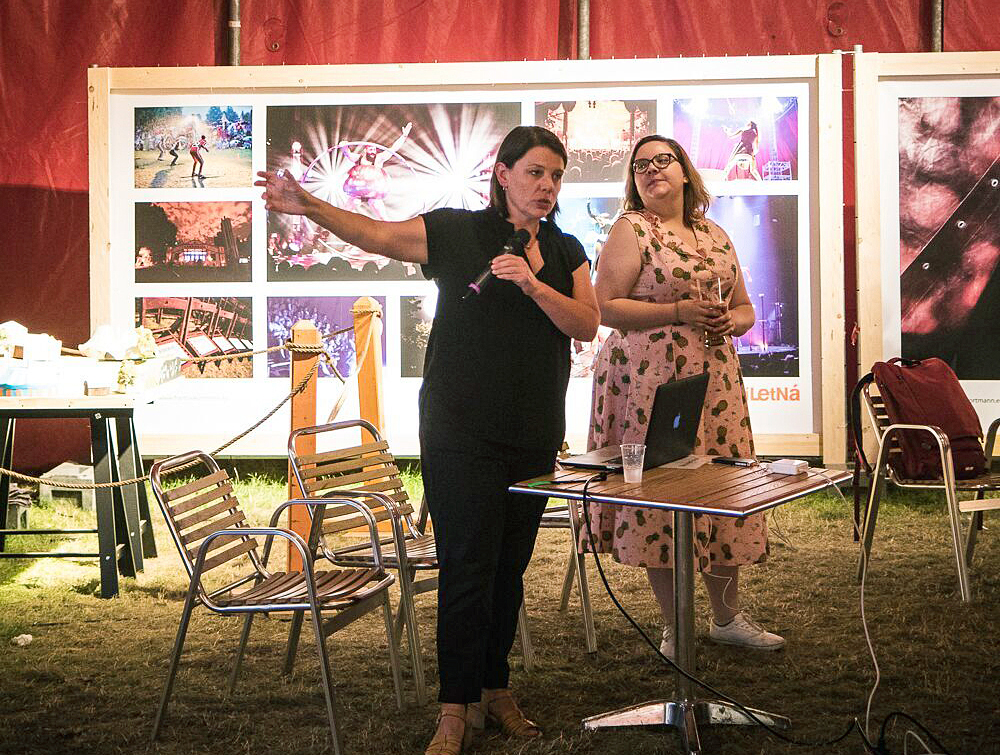 Associate Professor of Dramatic Arts Karen Fricker and MA graduate Hayley Malouin at the conference Circus and its Others II in Prague this past August. The two have recently published a special double issue of Performance Matters, titled “Circus and Its Others,” exploring questions around circus performance and gender, difference and dis/ability. (Photo by David Konecny)

For many people, the circus is a place of mystery and wonder, filled with the extraordinary, unusual and strange.

For Associate Professor of Dramatic Arts Karen Fricker and Brock alumna Hayley Malouin (BA ’15, MA ’17), these questions have led to a joint publication in the emerging field of circus studies.

Inspired by the inaugural Encounters with Circus and its Others conference organized by Fricker with assistance from Malouin in 2016, the publication features contributions from established scholars, graduate students and circus artists from around the world. Many of the contributors were in Prague to participate in the second conference and celebrate at the launch.

The conference series brings together scholars from around the world to explore questions about the place of difference and “otherness” in contemporary circus.

“We’re asking questions about circus in a way that allows people who have been working at these questions from different perspectives and different places to jump on board,” says Fricker.

Malouin, who has an undergraduate degree from Brock in Dramatic Arts, explored ideas of public performance, political protest and public performance of the grotesque as part of her MA in Studies in Comparative Literature and the Arts.

“Circus is an interesting cultural touchstone because it reflects societal norms about people, community and politics. This is in contrast to the image of circus – which circuses themselves cultivate – as existing on the margins of society,” says Malouin.

The special issue of Performance Matters was her first foray into academic publishing. In addition to co-editing the issue with Fricker, Malouin worked with other circus scholars, including Brock student Taylor Zajdlik (BA ’15, MA ’17), on a section of the journal exploring questions of queerness and freakery in the circus.

“It was a great experience to establish myself as someone with those skills,” says Malouin. “I really care about the work, I feel it’s important. It’s a substantial contribution to an emerging field.”

The special edition also includes work by DART Associate Professor David Fancy on disability and the circus, making reference to a creative research project in which he participated involving intellectually disabled survivors of institutional abuse.

The questions Fricker and Malouin are researching have application beyond the circus to culture as a whole.

“What we’re looking at is how questions about difference and otherness play out in certain practices in the contemporary moment,” says Fricker. “And more broadly we’re asking, how do we work to make culture more inclusive?”

The full issue can be read online for free.