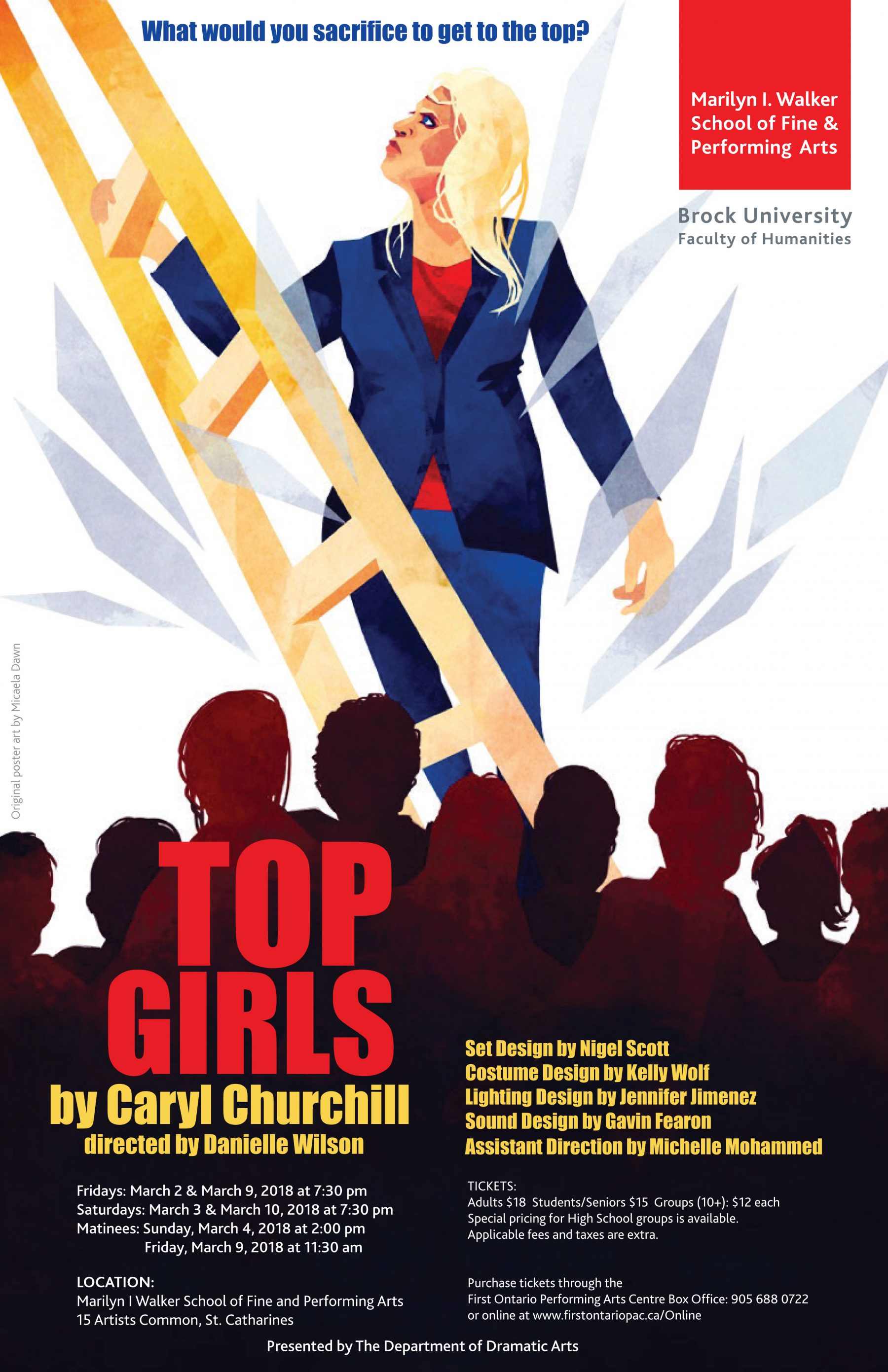 What would you sacrifice to get to the top?
Top Girls opens at the MIWSFPA on March 2. 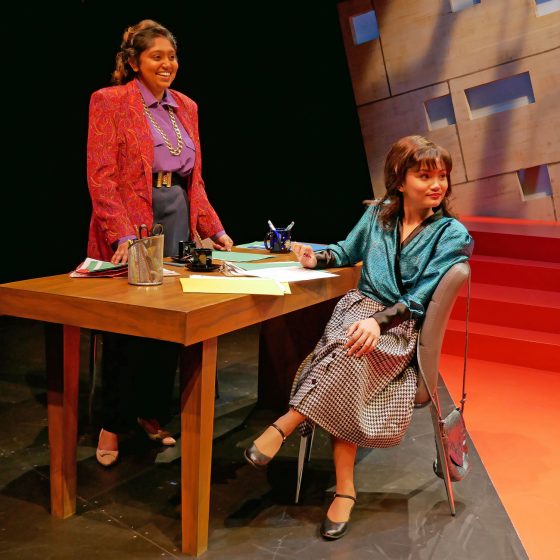 The Department of Dramatic Arts, part of Brock University’s Marilyn I. Walker School of Fine and Performing Arts, is proud to present an original production of this venerable play about women and power. First produced in 1982, last seen in Niagara at the Shaw Festival in 2015, this contemporary play tells the story of Marlene, a career-driven woman who is only interested in women’s success in business.

The play is an exploration and critical look at women and their relationship to power and success. For the director, Professor Danielle Wilson, the main question at the heart of the play is “what would you sacrifice to get to the top?”

The play follows the story of Marlene, who in 1980’s London has just been promoted to managing director of the Top Girls Employment Agency. With a magic realist twist we see Marlene celebrate her success at a dinner party with five women from history, literature, and art, and as the drink begins to flow, so do their stories of family, adventure, and loss which overlap in witty and humorous dialogue. 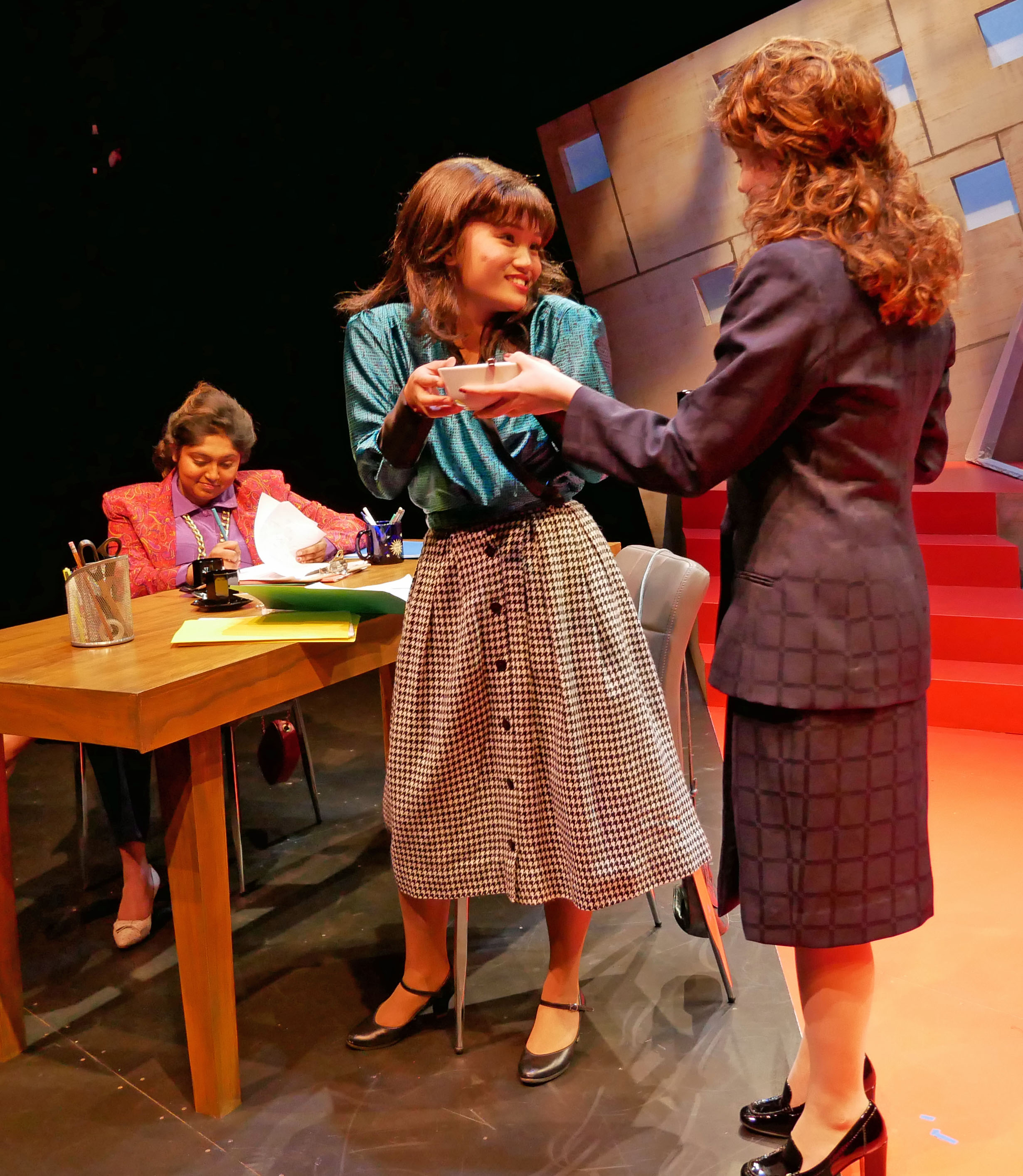 Throughout the play we also meet the real-life women in Marlene’s life at the office. They struggle to rise to the top of the corporate ladder but are held back by lack of opportunity and the harsh competitiveness of the business world.

The themes and story of the play are extremely topical.  The play examines the challenges of working women who choose self-promotion and career over motherhood, family, domesticity. We learn of the cost of Marlene’s ‘successful’ life. Set during the reign of the British Prime Minster Margaret Thatcher, known as the “Iron Lady”, the play asks whether it was an advance to have a woman prime minister if we elected someone with policies like hers.

TOP GIRLS highlights the contradictions between feminism and capitalism. A running theme throughout the play is the secrets that underpin Marlene’s success which in some ways serve to perpetuate the patriarchal structure common in many workplaces. We only learn of these secrets in the final confrontational scene with her closest family, Joyce and her daughter, Angie. 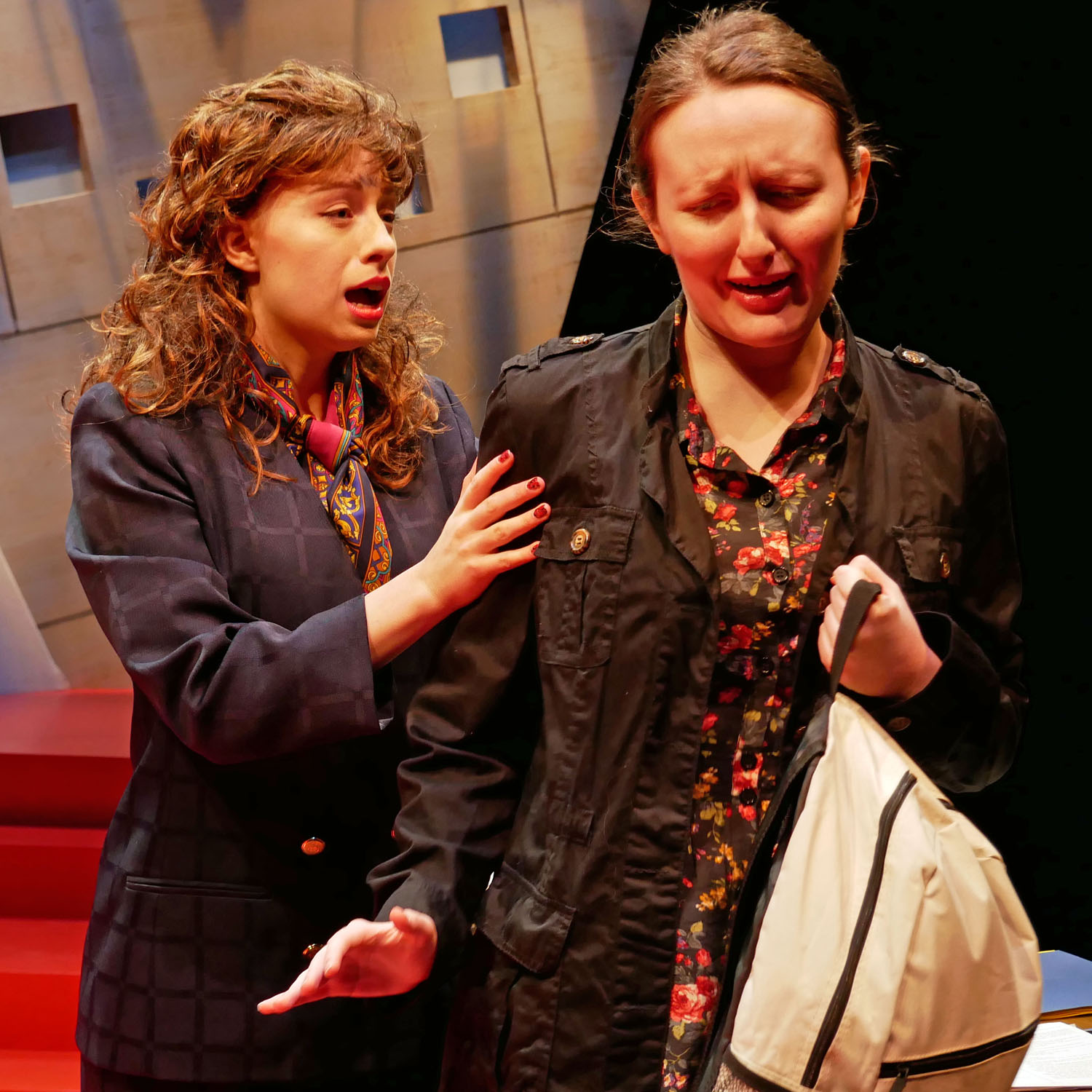 READ ALL ABOUT IT!

Director Danielle Wilson discusses feminism, ambition, #MeToo and the unique challenge of mounting this play in a brief interview found at the bottom of this page.

Fourth-year student and Assistant Director for the production, Michelle Mohammed, is writing about the development of the show in a dedicated blog: darttopgirls.wordpress.com and dartcritics.com

The public presentation program of the Department of Dramatic Arts is an integral part of the Marilyn I. Walker School of Fine and Performing Arts’ mandate to contribute to regional cultural development and build community connections by engaging our audiences with the breadth of talent and creativity of the students, staff, guest artists and faculty of Brock University.

The Department invites teachers and educators to bring their students to see this exciting production of TOP GIRLS.
Read the Special Invitation to learn more. 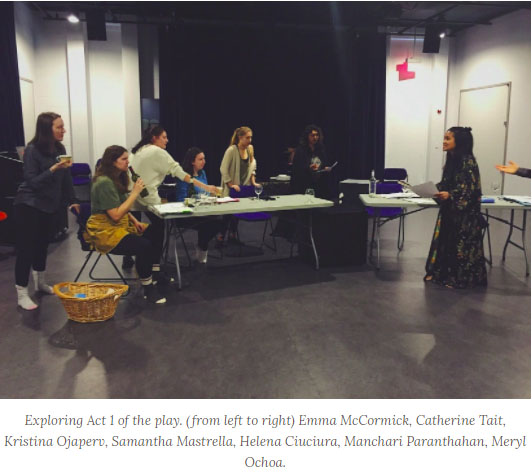 See the article in the Brock News.

We asked the director of Top Girls, Professor Danielle Wilson, about feminism, ambition, and the unique challenges of mounting this play.

What type of feminist beliefs does Top Girls draw upon?

The play is an exploration and critical look at women and their relationship to power and success. For me the main question at the heart of the play is “what would you sacrifice to get to the top?” Something is always sacrificed, whether it be relationships, personal integrity, mental health, leisure time etc., in the pursuit of success. Top Girls looks specifically at women’s responsibilities and relationships with each other in a capitalistic and individualistic society. It tackles these issues in a broader political spectrum vs. it being about women overcoming their oppression. You can’t get away from being a woman in this play, no matter how hard these women try. What I understand is that the play was inspired by two streams of feminism: one which is about changing the economic situation for everyone which is more collectively oriented and one that accepts and supports an individual’s success over the collective gain. Top Girls examines an individualistic society in which the few thrive at the expense of many and one in which isolated female success overshadows the plight of the majority.

How do you connect the feminism of the 1980’s portrayed in Top Girls to feminist movements and/or beliefs today? How do you think our students will understand the representation of feminist thought in your production?

Fourth wave feminism, which we are seeing now, tends to be more collectively oriented. Social media started an entire #MeToo movement, which questions abuse of power. Top Girls discusses power and success in relationship to women. The main character in the play, Marlene, tends to use what one might call more ‘masculine’ tactics in the workplace. The entire corporate structure has been built on more masculine characteristics of leadership. When a woman is in a top position, masculine qualities can run contrary to what is expected of her gender, so she may be perceived as cold or distant or a bitch. Margaret Thatcher, who serves as an unseen character in the play was described as the ‘Iron Lady”, but no man who ruled in the way she did was ever called the ‘Iron Man’, he was just a man. She even had voice lessons to help her sound more masculine so that her cabinet would take her seriously. One of the characters in the play, Nell says that “an employer is going to have doubts about a lady, whether she’s got the guts to push through to a closing situation. They think we’re too nice. They think we listen to the buyer’s doubts. They think we consider his needs and his feelings.” We’re becoming aware that there is more than one way to lead and it is not an imperative to oppress or step on others in order to succeed.

I think students will recognize the issues being debated between Marlene and Joyce as they each argue opposite political viewpoints. Today, there is definitely a more collectively oriented mindset as evidenced by the Occupy movement, Idle No More, and the #MeToo movement. There is resistance to the social and economic status quo. Young people, both men and women, are building strength through bonds with each other and challenging systemic abuse, racial profiling, and poor economic prospects.

Marlene’s character seems to be the one striving for the “top” and stepping on anyone in her way, should we be feeling empathy for her? Should we like or dislike her? What should we be learning from her actions?

I think ultimately it will be up to the audience to decide how they feel about her.  We learn a lot about her personal life in the third act and what she has sacrificed to get to where she is. Caryl Churchill, the playwright, has written a complex character who is flawed, but what human being isn’t? Some may admire and empathize with her actions. She did what she had to do. Others may not. We see both sides of the story in the final act in which she has a showdown with her sister, Joyce, who has taken a very different path in life. Ultimately, Churchill has written a play that involves more questions than answers, but that’s the beauty of it, you get to chew over these questions after the play is over. To me, that’s the mark of a great play.

Are there significant challenges with this production that our audience would be interested in knowing about?

The play involves a big dinner party at the very beginning. Caryl Churchill has written overlapping dialogue where people are talking over each other, like at a real dinner party. It has been challenging to choose what the audience hears and doesn’t hear.  Sometimes the audience will hear both and have to choose which to listen to. It has been both a challenge as a director and as an actor. Not only must the actors learn their lines, but they must also learn when they begin speaking in the middle of someone else’s line.