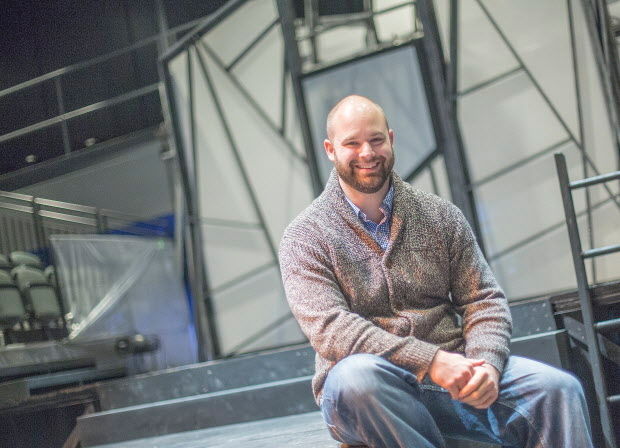 Gormenghast, based on the cult classic fantasy series by Melvyn Peake, opened at the Marilyn I. Walker School of Fine and Performing Arts Nov. 11. Long regarded as one of the great fantasy trilogies – drawing comparisons to The Lord of the Rings – it brings a sense of the epic to the theatre’s modest 150-seat theatre.

Director Mike Griffin says students will utilize the entire space while using different theatrical styles to tell the tale of two youths who defy ancient traditions and the government motto of ‘No Change’ to wrest control of the dysfunctional House of Groan which rules the land.

Griffin says it will push Dramatic Arts students in ways they’re not accustomed.

“When you look at the kind of plays students often do, they’re realistic or they’re playing sort of normal characters. I really like the opportunity for a physical play.”

As a bonus, it’s a bonafide fantasy classic rarely ever performed in Niagara. While Griffin likes to challenge students, he also wants something with box office appeal.

“As a professor here I definitely want to be engaging the students in something that’s going to stretch them,” he says. “But you want to have people come and see it.

“This production in particular is exciting because of the fantasy element. You don’t often get to see a fantasy production on stage.”

With 16 cast members, the show will run until Nov. 19. Griffin, in his second year at Brock, calls them the best group he’s ever worked with.

“We want the students to really be engaging in the work.”

While it has never been made into a movie, Gormenghast was adapted into a four-episode BBC series in 2000 starring Christopher Lee and Jonathan Rhys Meyers. The stage version debuted in 2006.

Written between 1949 and 1959, the books still strike some universal chords of rebellion, says Griffin. Their influence can be spotted in modern fare like The Hunger Games and A Song of Ice and Fire (Game of Thrones).

“It looks at these youth rising to power, and going against the traditional and ancient ways of how things normally happen,” he says. “The play begins with the birth of this new earl, and then everything starts to crumble.”