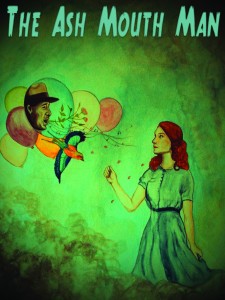 The Ash Mouth Man, a brand new original play written by Brock Dramatic Arts (DART) faculty and Stolen Theatre Collective’s (STC) Gillian Raby and Danielle Wilson, opened Thursday September 15 at the Marilyn I. Walker Theatre in partnership with the FirstOntario Performing Arts Centre. Prior to any acting, those attending are participants in the experience of the show; the Ash Mouth Man brings audiences into an interactive and “up close and personal” space; audience members are asked to contribute names, landmarks, and interact with objects from the start. The show, inspired by the short story Dead Sea Fruits by Australian author Kaaron Warren, takes audiences back to the 1950s where we find Lorna (played by Danielle Wilson), a progressive female dentist who works almost exclusively on Pretty Girl Street ‘where the girls don’t eat’.

Throughout the show, we see Lorna undergo somewhat of a transformation. Her equal-parts blissful and frustrating marriage to Harry (played by STC co-founder and co-artistic director Fede Holten) acts as somewhat of a catalyst to her vulnerability. We observe as Lorna struggles with self-doubt, trust and her worth. We watch as Lorna changes from someone who takes pity on the ‘Pretty Girls’ (played by Colin B. Anthes and Sean Aileen McLelland) whose teeth are falling out from malnourishment and have delusional dreams of a mythical (or so we think) figure called the Ash Mouth Man, to one who puts herself on the same level as them.

One can definitely appreciate the production’s set design and interactive and captivating style, and applaud the fairly seamless application of the dark comedic style to somewhat of a heavy underlying topic. This show without a doubt leaves audiences with something to think about. Nearing the end of the show, audiences are left with a ‘story’ to bring home to their families and their friends. The Ash Mouth Man is not just a show, but a conversation starter.