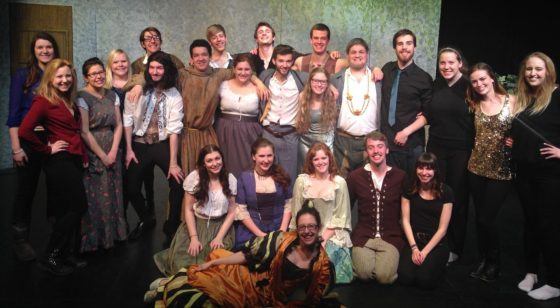 Brock University students showed their support for Carousel Players with a $600 donation this month. All of the box office proceeds from their Brock Connections production of Star-Crossed: A Musical Shakespeare from March 28-29, 2014 were donated to Carousel Players, Niagara’s theatre for young audience company. Directors of the one-act parody of Romeo & Juliet, Megan Dene & Nick Leno added “Please continue to inspire young people and their families to pursue and be involved in the arts.”

“We were deeply touched by this unexpected gift that showed the true passion for the arts of these 23 students, “said Jane Gardner, General Manager of Carousel Players. “We used the funds to give the gift of theatre to St. Christopher Catholic School who received a free performance of Carousel’s Dib and Dob and the Journey Home at their school. Paul Lukacs, a teacher at St. Christopher told us of the wonderful theatre experiences the children aged 4 and up had at his school that day. For many children it was their first theatre experience.”