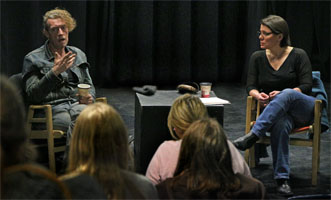 On 13 February, 2014, the director Peter Hinton visited the Department of Dramatic Arts for a two-hour talk about his work as a director and adaptor. He responded to questions from students in DART 3P96: Studies in Praxis – Theatre Criticism, as well as from other students in the department.

Hinton spoke about a number of his recent projects, including his adaptation of Chekhov’s The Seagull, which premiered Montreal’s Segal Centre in February 2014; his 2013 Shaw Festival production of Wilde’s Lady Windermere’s Fan; and his upcoming staging of the musical Cabaret, also at Shaw. Discussion focused on Hinton’s research processes and how these inform his directorial concepts, in particular on his approach to existing and canonical works. Hinton also spoke about his relationship to theatre critics: “I’m not after five stars; I’m after a respectful dialogue,” Hinton said of the critics who regularly review his work. “I don’t want to be in search of [their] praise or victim of [their] ignorance.” When asked for his advice for a new generation of Canadian theatre artists and professionals, Hinton reminded the group that the professional relationships they form during their student years may be the most important ones in their careers, and urged them to consider their professional creative lives as already underway: “I always thought that theatre was an elite club to get into, but theatre already belongs to you.”

Hinton has worked with major theatre companies across Canada including Theatre Passe Muraille and Canadian Stage; Playwrights Theatre Centre in Vancouver; Playwrights Workshop Montréal; and the Stratford and Shaw Festivals. He was the director of the English theatre division of the National Arts Centre from 2005-2011, and is originally from Toronto.