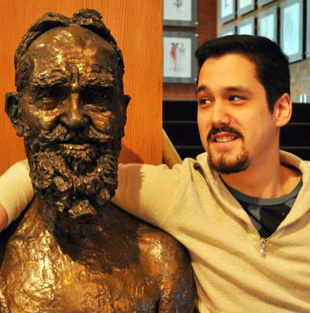 Kevin Chew and a bust of George Bernard Shaw

Every year Brock’s emerging theatre artists have an opportunity to intern for a six-week intensive learning experience at one of Canada’s most renowned theatre organizations, the Shaw Festival in Niagara-on-the-Lake.

Kevin Chew, a Concurrent Education student studying Dramatic Arts at Brock University, is the successful Intern candidate for 2013. Kevin was recently seen performing on the stage of the Sean O’Sullivan Theatre of the Centre for the Arts at Brock University in the Department’s February Mainstage The Blue Room by David Hare, directed by Virginia Reh. For his upper year thesis project Kevin conceived and directed the innovative investigation of restaurant service industry in the immersive dinner theatre event entitled Table 99, self-produced at Isaac’s Bar and Grill at Brock University.

Students of the Department of Dramatic Arts are eligible to apply for this intensive residency following the successful completion of DART 4P92 Voice and Text of Bernard Shaw. Their academic studies in the Department come alive in the festival milieu of Shaw company professionals producing at the top of their game.

Following the development of world-class theatre productions from rehearsal studio through to opening night Kevin is also involved with projects such as cataloguing, appraising and photographing pieces in the art collection of the Shaw Festival, developing templates for potential community outreach/ engagement programs, education and engagement research, and assisting in the Festival’s Stage Properties shop in Virgil, Ontario.

Through participation in singing and Alexander technique workshops, scheduled lunches and casual conversations with his new peers and mentors, Kevin is discovering what it means to contribute to the wealth of creative talent in the Festival company of theatre artists, production staff and administrators.

The DART Shaw Festival Internship program is generously supported for three years by proceeds from the annual General Brock’s October Soiree. DART graduates who have completed the internship include Robyn Cunningham (2012) and Jacqueline Costa (2011).