An Acre of Time by Jason Sherman (DART 4F56) 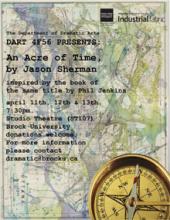 April 11, 12 & 13, 2013 at 7:30 p.m.
A government land surveyor (Julia) uncovers the history of an acre of land near the Ottawa River, a barren rectangle that contains the memories of all who passed through it, from the last native hunter to the first white settler. Somehow, the layers of loss, land and remembrance enable Julia to grasp what she needs in order to let go.
Location: Room ST107 (Studio Theatre) Schmon Tower, Brock Campus
Admission: Donations accepted

This is part of the Industrial Fabric 3 program. (Click the link for more information.)

An Acre of Time tells the story of government land surveyor (Julia) who uncovers the history of an acre of land on the LeBreton Flats near the Ottawa River. This barren rectangle contains the memories of all who passed through it, from the last native hunter to the first white settler. Somehow, the layers of loss, land and remembrance enable Julia to grasp what she needs in order to let go.
The LeBreton Flats is a blank urban space that has been in limbo for decades. In 1962, the government expropriated it and knocked down its community. The Flats represent not only a government’s abdication of responsibility, but also an emotional void that can only be filled by recognizing and honouring the ghosts who still live there.

Julia, played in different time periods by three actors: Kaitlin Race, Cassandra van Wyck, and Olivia Jackson, learns that there are different kinds of mapping processes, and that the most important survey brings our own lives to light. Julia’s government work crew colleagues, played by Kanthan Annalingam, Karyn Lorence, Shauna James and Emma Strong, become guides on Julia’s journey as she encounters the ghosts of Samuel de Champlain, played by Erica Charles, and surveyor John Stegmann, played by Jessi Robinson. The speculator John LeBreton is played by Stephanie Neale. Tom, a first nations artist played by James Lowe, conjures the spirit of Constant Penency, an Algonquin hunter who has joined the spirit of Julia’s daughter, Louise, played by Grace Ruppenthal. Evan Mulroney plays Bill, Julia’s husband who lost their daughter Louise to a river drowning.

The set, lighting and video design, by Dylan O’Connor, James McCoy and Nathan Heuchan, is a meditation on mapping and memory that pulls the layers of story into a unified whole with props and costumes designed by Jo Pacinda and John McGowan. The production, in its complex entirety, is stage managed by Kate Hardy and directed by professor Gyllian Raby.

For more information about this production, e-mail dramatic.arts@brocku.ca

Such productions from the Department of Dramatic Arts are an integral part of the Marilyn I. Walker School of Fine and Performing Arts’ mandate in building connections between the community and the breadth of creative talent that defines our academic programs at Brock University.
-30-