Khalida: a play for the Arab Spring, opens in St. Catharines at the Sullivan-Mahoney Theatre 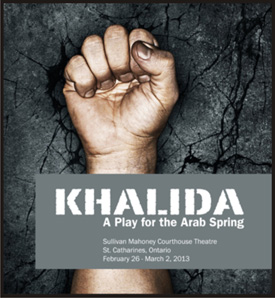 By Dr. Karen Fricker and staff

The story told in Khalida, a new theatre production playing this week in St Catharines, might at first glance seem somewhat removed from the experience of many Canadians. Subtitled ‘a play for the Arab Spring’, it takes the form of the confession and testimony of Said, a man on the run from his native Middle Eastern country, which has become a battle zone.

But the play’s origins couldn’t be more local: it springs from the friendship between author/director David Fancy, Associate Professor of Dramatic Arts at Brock, and the Iraqi actor Addil Hussain, who received a BA in Dramatic Arts degree from Brock in 2006.

‘Addil was Saddam Hussein’s favourite actor,’ Fancy explains. ‘He fled Iraq during the first Gulf War and, after living as a refugee in Jordan for six or seven years, finally ended up in Canada. He did a degree in the Drama in Education and Society stream at Brock and became a Canadian citizen’. Audiences might remember Hussain’s performances in two of the three plays performed in An Arabian Trilogy, a departmental Mainstage production in 2006. In the third play he performed the role of the father in Leila Tatadaffah Bil Rasass. Mun Youaniquha? (By the Warmth of the Bullet that Kills) set in modern-day Baghdad and written by another Brock graduate Abbas Aldilami.

Fancy says he wrote the play ‘for the express purpose of continuing a conversation with Addil, having witnessed the challenges that he experienced as an individual and as an artist finding a voice as a new Canadian.’ The play is being produced by neXt Company Theatre, of which Fancy is co-artistic director.

While his friendship with Hussain offers fascinating insight into Khalida’s origins, Fancy believes an appreciation of the production does not rely on this backstory. ‘This is about a person somewhere in the world who has experienced difficulty and is using creativity to frame that and move beyond it,’ he explains.

The role of Said is being played by Toronto-based actor Jason Jazrawy, whose father is from Iraq. Jazrawy calls Said ‘an Arabic Everyman who whom all ethnicities can relate’ and says he welcomes the opportunity to ‘portray an Arab as a positive role model for a change,’ having found himself often cast as a terrorist jihadi because of his heritage.

Alongside Khalida, neXt Company Theatre has facilitated a community engagement project, The Arab Spring Monologues, which features 9-10 Niagarans, including four Brock students and recent graduates, writing about how the Arab Spring connects with their own experience or with the region.

Students from across the DART concentrations – Applied Theatre and Drama in Education, Theatre Praxis, Performance, and Production and Design – will be attending the production. The production presents an excellent model for the Brock students’ creative investigations in writing and dramaturgy, performance, and production, as well as personal and social identities and citizenship, remarks the Chair or the Department, David Vivian.

As for Addil Hussain, he returned to the Middle East in 2010, and is now working as an actor in Baghdad. Despite being half a world away, this production of Khalida is very much on his radar. Via Facebook, he sent this message to Fancy and his collaborators: ‘Khalida was just a wish, and an idea, then became reality… I’m fully confident that Khalida is in great hands, hands with a great level of professionalism. Break a leg!’
———-
Khalida plays at the Sullivan Mahoney Courthouse Theatre from 26 February-2 March. Tickets are available here. The Arab Spring Monologues play 5-7 pm on Saturday, March 2 at Robertson Hall, 85 Church Street, St. Catharines. Admission free; groups are requested to contact the company in advance here.