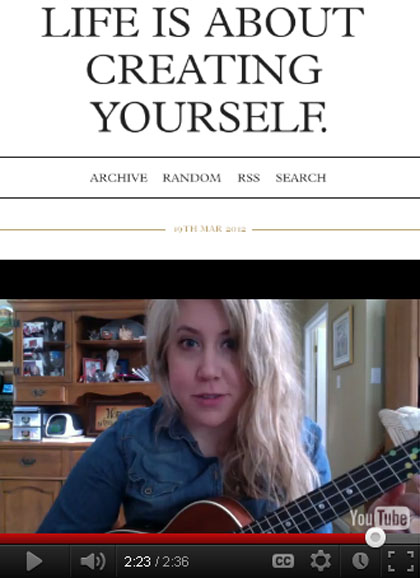 Robyn Cunningham, seen in one of her Tumblr vlogs.

Every year Brock’s emerging artists have an opportunity to intern with one of Canada’s most renowned theatre organizations, the Shaw Festival, for a six-week intensive learning experience. Early in the new year an application is offered to students who successfully complete DART 4P92 “Voice and Text of Bernard Shaw” as part of their final year of study. One deserving student is invited to polish their studies at DART by interning with professionals at the top of their game as they create productions for the Shaw Festival season.

Graduating student Robyn Cunningham will be the Summer Intern at the Shaw Festival for 2012.  Under the guidance of Co-Artistic Director Eda Holmes, Robyn will experience an intense period of production rehearsal and development from first read through to season premieres.  Some of the shows Robyn will witness in development include The Millionairess and Present Laughter.  Robyn (seen below) will be regularly posting to her tumblr vlog across the six weeks – check in regularly and say ‘hi!’.

Brock graduate Jacqueline Costa was the first DART Intern at the Shaw Festival in 2011. Jacqueline graduated with a BA (First Class Honors) in Brock University’s Theatre Stream with strong interests in both production and performance. While a student her success in theatre creative research and production was seen in the Brock main-stage performances like Charles Mee’s Big Love (2010) and Sharon Pollock’s Blood Relations (2010) and in her work as Departmental Technical Production Assistant and Research and Production Assistant to faculty.

While at Shaw Jacqueline worked together with Lighting Design Director Kevin Lamotte and assisted with the development of his lighting designs for the 2011 performances of Cat on a Hot Tin Roof and Heartbreak House, where she also had the privilege of meeting directors Eda Holmes and Christopher Newton. Jacqueline attended various dress-tech rehearsals, show previews, read-throughs and clean-up calls. Jacqueline remarks that “it was interesting seeing lighting levels, lighting hangs, load in’s and changeovers for the shows on such a grand scale at the Shaw Festival.”

During the remaining weeks, Jacqueline worked with Design Director William Schmuck, where she was able to preview other shows from the 2011 season such as Drama at Inish – A Comedy and My Fair Lady. She also witnessed the build of lighting level sets for Alan Brodie’s Admirable Crichton and Louise Guinard’s On The Rocks. In addition, Jacqueline toured to other Shaw facilities including the properties, scenic painting and carpentry shops and met with designers Sue Lepage, Charolette Dean and Christina Poddubiuk. Jacqueline comments, “in terms of being introduced to interesting members of the professional design/theatre community, this internship succeeded.”

Working closely with the Shaw Festival, Brock’s Dramatic Arts Department aims to develop these programs, and many more, to it’s young emerging artists – offering them post-graduate opportunities to interact and network with the greater professional performing arts community.

Also at the Shaw Festival this season are recent Department graduates working in various aspects of technical theatre production.  Anrita Petraroia (DART ’07) is back at the Festival this year, having helped out on a couple projects in Technical Direction last season. Chris Penney (DART ’08) has secured a regular season’s call in the audio department. Sadie Isaak (DART ’10) is now being trained to take over the Cobbler’s position in Production Wardrobe and will be joining the Wardrobe Running staff later in the season.