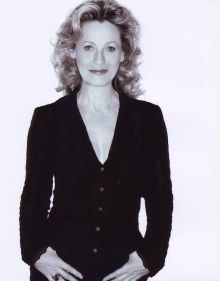 Kate Trotter, a celebrated actress of theatre, cinema and television was presented with the “Distinguished Alumni Prize for the Humanities” on March 31, 2012 at Brock University.  Ms. Trotter graduated from Brock University with a Bachelor of Arts (Honours) in Dramatic Literature, First-Class Standing, in 1975 and the National Theatre School of Canada in 1978.

During the past 37 years Ms. Trotter has established an international reputation as a lead actress in film, television and stage production.  Roles in theatre have included significant work in both classics and modern pieces: she has performed in Canadian plays by Anne Chislett, Tmothy Findley,  David French, John Murell and Sharon Pollock among others as well as various Shakespeare, comic, tragic, and lyric theatre productions.  She has collaborated with Canadian luminaries such as Martha Henry, Bill Hutt, Brent Carver, Robin Phillips, Richard Monette, RH Thompson, Al  Waxman, Bill Shatner and Donald Sutherland.

Her numerous roles in television include Being Erica, The Murdoch Mysteries, The Jane Show and CSI.

She has also directed for the National Film Board and for women in the director’s chair as well as for the stage.  Ms Trotter has taught Shakespeare at George Brown College, is co-founder of a program supporting kids at risk called youth and the law and for several years has been part of training programs for Canadian judges teaching communication skills in the courtroom.

The “Distinguished Alumni Prize for the Humanities” was founded in 2002 to celebrate the achievements of Brock’s finest graduates. The award is conferred upon alumni who have made outstanding  contributions to their field of study and the larger Brock community, as both a scholar and role model.

On March 30, 2012 from 7pm-9pm the Department of Dramatic Arts hosted a special event (studio location TBA) to introduce Ms Trotter to our current students and aspiring artists. All DART students and faculty were welcome to join the Department as we celebrate her success and raise a glass to toast this alumna of Brock Theatre.