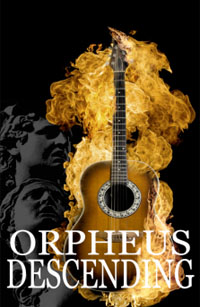 The tragedy of a closed society, destroying the ‘other’ within and without.
– Virginia Reh, director

Orpheus Descending is a modern version of the Greek myth in which Orpheus, the beloved musician of the gods, goes down to the underworld to rescue his dead wife Eurydice. Orpheus is forbidden to look at his wife until they are clear of the underworld, but he cannot resist, looks, and loses her forever. In Williams’ play, Valentine Xavier (Val), a guitar-playing stranger, comes into a small town in the U.S South and “rescues” an unhappy Lady Torrance. He breaks the rules of the tight society of the town, with catastrophic results.

The play was first performed on Broadway in 1957 and was adapted for the screen in 1959, starring Marlon Brando. With this presentation the Marilyn I. Walker School of Fine and Performing Arts is celebrating the 100th birthday of this great twentieth century American playwright. This is one of many productions from the Williams’ canon to be seen this season, including The Night of the Iguana at Hart House Theatre in Toronto, Cat on a Hot Tin Roof at the Shaw Festival, Camino Real at the Goodman Theatre in Chicago and The Wooster Group’s innovative rendition of Vieux Carré in New York.

Director Virginia Reh is delighted to have Brock alumnus Michael Greves design this production of Orpheus Descending. Since graduating from the Department of Dramatic Arts Greves has been involved in countless productions including the Shaw Festival and was seen recently on stage in Stray Theatre’s production of Les chaises at the Sullivan Mahoney Theatre. Our production stars 17 second through fourth year students supported by student colleagues in direction, dramaturgy, stagecraft and production.

preview article and video in the St. Catharines Standard

Celebrating 100 years of Tennessee Williams in The Brock Press 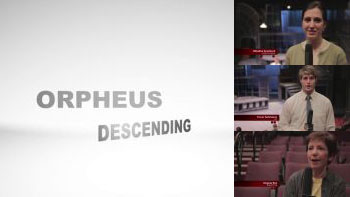 This year, the Department of Dramatic Arts at Brock University presents Tennesse Williams’ Orpheus Descending directed by Virginia Reh. Pictured is a screenshot from a video feature in the series “Artist Profiles” by BROCK TV, which includes questions answered by Virginia Reh, and actors Trevor Ketcheson and Rebekka Gondosch. This video is not currently online.