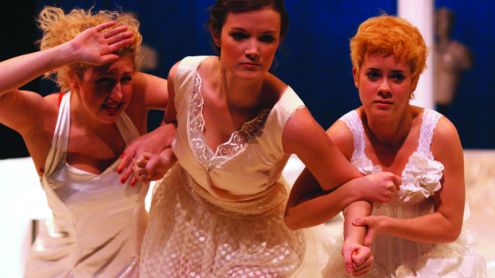 DART’s February production, Big Love, is American Charles Mee’s contemporary update of Aeschylus’ The Suppliants. First performed circa 423 BC, The Suppliants is one of the oldest plays in the world and the only play to survive from the trilogy in which it originated. Aeschylus titled the trilogy The Danaids after the daughters of Danaius who are also the protagonists of his play.

Big Love took America by storm in 2000 to 2003 precisely because Mee is in tune with his age. It is not just the ideas and the exhilarating physicality within Mee’s plays that caught the attention of America, but also his use of freeware. Posting the script online provided an open invitation for people to re-make the play however they would like.

The intensity of the scenario bursts the bounds of rational discourse and must sometimes be danced, sung, howled and fought out. Designer Karyn McCallum has set our production in an installation where Mattel’s gendered Ken and Barbie dolls hang from the lighting grid and punch-bag forms are anchored to the stage floor. Together, they reach for one another in an uneasy balance. Some of the music proposed by Mee will be used in the production but paired with contemporary pieces selected for this version. A deeply passionate movement score with some choreography from Allen Kaeja (of Toronto’s independent dance company Kaeja d’dance) moves the play through an exhaustive demonstration of the gender anxieties felt by men and women alike, to a finale that lies beyond justice. The production aims to move seamlessly from pop culture to philosophy to physical extremes. This is in an attempt to convey the chaotic savagery of love, the dark psyche of the survivor and, at the end, the impossibility of justice or forgiveness.

Educators and Counsellors:
Big Love : A Primer, is an introduction to our production, written by our Director, Gyllian Raby
Download your PDF copy of Big Love: A Primer

Big Love is an intellectually and theatrically challenging show recommended to the campus community (and with teacher guidance to students in grade 11 or 12) who are interested in law, philosophy and/or classics. Students can study and discuss Big Love (which Mee has posted free online!) prior to attending the production. This will enable students to look beyond the pop-culture surface and see the underlying issues that echo yet vary from its classic antecedent.

Click on the screenshot to the left to watch a video about our production, including an interview of the Director and DART Professor, Gyllian Raby, by DART student, Tanisha Minson (produced by Brock TV).  (NOTE: link currently broken. We are tracking down the original video.)